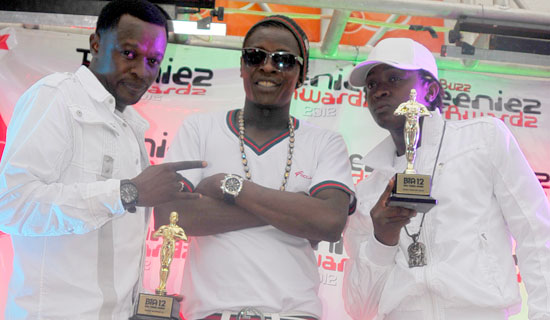 Cleo lets Lindah try out her job as a radio presenter. PHOTO BY ISMAIL KEZAALA

(Cleo and Hildah met at RadioCity in Bugolobi, and chatted the afternoon-away in the station’s studios, during her afternoon show)

I’m Hildah Lindah.
What do you do?

I’m a student at Mubs. What did you study?
I wanted to do Mass Communication but my guardian, I’m an orphan by the way, had so many cousins of mine that he was looking after and then mass com was too expensive, so to lessen his burden I opted for a cheaper course that would help me … Social Sciences, which was about Shs450,000 a semester then. Do you love what you’re studying? Because you have to study something you love.

Yes I love what I’m studying although I want to be a model as well!
Okay, so have you tried modeling? You should not go for shady gigs, you need to do serious gigs!

Yeah there’s an event coming up that I’ve been invited to work on, a company is launching a fashion line. I love your character in all your movies!
Which movies of mine have you watched?

Last king of Scotland, Changes and this one oba State what?
Oh State Research Bureau. Thank you, I’m honoured.

How do you manage doing so many things at the same time?
Since High school, I’ve been multitasking because when I was in high school in Bugema, I was a library prefect, involved in the drama club and the choir. I used to be shy but I loved arts. Then in Obsessions we acted, made tours and I was doing a TV show. We met new people and this helped me become bolder and with this I adapted to multitasking. Today, if I’m working within Uganda, I make sure my appointments don’t collide with the presenting time and if the project is in Kenya, where I shoot Changes, I ask for months off.

And your wardrobe? Do you have a stylist who helps you out?
No, I don’t do a lot of shopping but if I’m to buy it’s at Sylvia Owori or Kamikaze in Ntinda. Sometimes I take my clothes to Brenda Nanyonjo and I ask her which ones look good on me because I hate trying on clothes.

What do you miss about obsessions?
I still see most of them. I had been there for like six years, that’s when I starred in Last King of Scotland, though I turned down a few gigs because I was attached to a group… so I left because I felt like pursuing my dream. But I was closest to Natasha because our birthdays were close.