Accidental comedian. Seeing a long line at Theatre La Bonita, Muhangi thought there were auditions for actors and he joined in. He was later to qualify as one of the contestants for M-Net’s Stand Up Uganda search and the rest is history, writes Edgar R. Batte

We met Alex at his day job at Fenon Records where he is the production manager. There is little trace of the Runyankore/Rukiga that is his stage signature and he looks every part the record producer designer in jeans and T-shirt complete with an SRK cap but he still has his trademark amiable smile. He is open and friendly, like we are old friends, probably as a result of the values he learned growing up in the village because as he repeats throughout our interview, Alex Muhangi comedian-extraordinaire and respected hit – maker at one of the leading music studios in the country is really a simple village boy. We had a chat about his life, love and comedy.

Who is Alex Muhangi?
I am a sound engineer at Fenon Studios in Industrial Area but most importantly I am a good Mukiga from a small village nestled between hills called Mparo. By the way, we are not as lucky as Kampala people who have sunshine the whole day, we see the sun around midday after it shows up from behind the hill, and then it disappears around 3pm behind another hill. I just came to Kampala the other day on Horizon bus.

What about your family, are they still in the village?
(Smiles) Leave my family out of this. All I can say is I come from an extended family of over 10 sisters and three brothers.

So how does a bonafide village boy end up producing music in the city?
I come from a very musical family; my father was a musician and at home we played every instrument except drums. I don’t know why we didn’t play drums. It is a long story but briefly, I was working as a radio presenter upcountry  after getting my Mass Communication degree where I specialised in electronic media. During that time I was also doing Runyankore voice overs for Vision Voice, so I would come to Kampala almost every two weeks. I met Benon Mugumbya (now of Swangz Avenue) and got interested and eventually involved in the studio. In 2008 I went to South Africa and studied sound engineering majoring in studio production, then came back in time to take office just when Benon was leaving Fenon.

How did you, a village boy, fit with the hip crowd at the studio?
They loved me. Like a typical villager, I had a lot of stories to tell. Ask anyone who knows me and they will tell you they are not surprised I ended up in comedy. I would make them laugh. Incidentally I no longer have those many stories probably because I save every funny story to use as a joke during shows.

But your clothes are too hip for a village boy…
Yes, I dressed up like this because I was a guest on Urban TV earlier today. I have to look urban,(he motions  at his getup). If I am invited to Bukedde TV, I will dress with local swagger.

So which is the part-time job, comedy or the studio?
I believe comedy qualifies as the part-time because I do it once a week if you don’t count the gigs at functions.

How did you then end up doing comedy?
Now that’s quite a story. I was just driving along Kimathi Avenue when I saw people lining up outside Labonita. I thought it was acting auditions and joined because I always wanted to act. I was surprised when the audition judges asked me to tell them a joke. I went through and became one of the main contenders of what I later learnt was M-Net’s Stand-Up Uganda comedy search. I left the show when there were just three more shows to go because I didn’t know how to edit my stories into jokes. That was a wakeup call because I realised I really liked doing stand-up comedy and wanted to do it.  After Stand-Up Uganda, we got together with the other runners- up and started the stand-up comedy outfit The Crackers at our first home in Effendy’s.

On stage you look like you have killer jokes at your finger tips. Where do they come from?
I look like I am just getting them off the top of my head but I have to prepare. I write down every joke I am going to share. Mostly I get the jokes from looking at real life situations, like the Bakiga and Banyankore jokes, it is just an exaggeration of something people know and it comes off as funny. Someone may sit and think they can be funnier or can tell better jokes, but comedy is an art. One has to prepare.

You smile a lot. What are you like when you are angry?
(Smiles, again) I do not get angry, even a little. You would wear yourself out if you are trying to make me angry. I don’t stress myself so that I am able to make jokes, a comedian doesn’t need stress. I don’t even worry or spend hours thinking about things. If for example I feel tired I will not force myself, I just call and say I don’t feel fit to go onstage. Even if someone who owes me money doesn’t pay I do not get mad, I just let him be and avoid lending him next time. How will I make jokes if I am worried about the landlord or a girlfriend?
Speaking of girlfriends, what is your relationship status?
(Smiles shyly), I have a girlfriend. But I must tell you in this city there are many girls. Too many good looking women!

Do you sometimes help yourself to some of that plentiful beauty?
No no no, I was not finished. There are many girls yes, but I don’t run around chasing every skirt. I told you I have a girlfriend! Besides the girls play hard to get and I don’t have time to chase. I believe women need respect and have a right to make a choice.

But surely, don’t the girls throw themselves at you, being young funny and famous?
I was raised a good Christian, I still follow the Bible and go to church when I can. I go home early and I certainly don’t take every girl who screams at me home. Most girls just want to be friends anyway because they think I am funny.

A certain tabloid doesn’t seem to think that way! You have become tabloid fodder; doesn’t it get you into trouble with your girlfriend?
That doesn’t worry me. I am yet to see a story I can’t explain away with comedy. I am funny, thus I always have an excuse. What is a bad story anyway? I do not do bad things.

And does this unnamed girlfriend find you funny?
She will remain unanamed. I try my jokes on her and most times she laughs. If she doesn’t, then I know it will not work with my audience.

People come to comedy to unwind, what do you do for fun?
I play pool, sometimes I dance but not like how Kampala girls go out in a group solely to dance. I also watch stand-up comedy; Ghanaian Kodjo is in my opinion the funniest man alive. Kenya’s Eric Omondi also does it for me. I also watch Mic check, it’s my favourite show.

What should we expect from Muhangi in five years?
In five years (pauses pensively for minute several seconds), I believe I will be married, retired…. everything ending with the letter ‘d’. I may not be doing comedy on stage to give room to young upcoming acts, but I will still be involved behind the scenes somewhere. I don’t want to be doing a weekly show in five years.

Any joke for Sqoop fans, your favourite maybe?
I don’t have a favourite joke really. If I tell a joke and people don’t laugh, I ask them why? But there’s this one about a mad man who found a 4×4 parked by the road side. Mistaking it for a mathematical question, he got a nail and scratched a neat clear =16.The next day he found the same car on the same spot but with the scratched area repainted. Again he got a nail and scratched the answer = 16. Bigger this time. The owner meanwhile decided to outwit the mad man by having the answer =16 painted right next to the 4×4 in bold white, and it worked for a while, until the lunatic decided to tick the answer……,   ah, I will stop there you are laughing too much, a stand-up comedian always leaves when his audience is laughing the hardest!

(I am almost falling off my chair at this point and he is also laughing with me).

In this article:Alex, Edgar, funniest, Muhangi 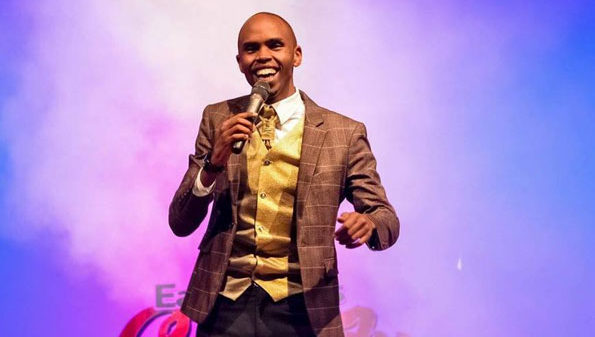 With most star singers still contemplating how to overcome public rage over their decision to go to bed with President Museveni, their brothers and...

The movie : The Descendants