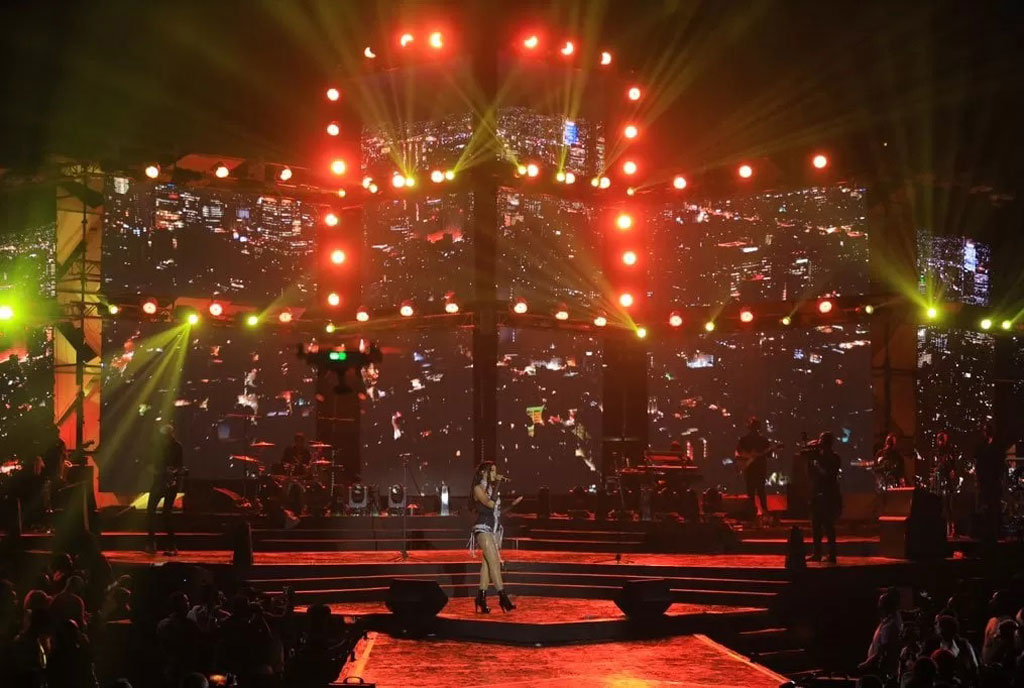 As Ugandans wait for February 10, 2023, for the much anticipated Jose Chameleone’s ‘Ggwanga Mujje’ concert, it should be noted that Ugandans have now mastered the art of investing in concerts. Leave alone putting money into advertising and promotion, Ugandans have also learnt that venue choice and good production will make define the event.

Ugandan music lovers have also proved that even though they sing and dance to Nigerian and South African music, they also enjoy seeing Ugandan artistes take the stage as they have graced most of the Ugandan events in large numbers.

When it comes to such shows, production and venue are some of the things that cost a fortune but Ugandans have learnt to go for it. Recently, Spice Diana invested big in her show at Cricket Oval Lugogo. Here are some of the shows that have given revellers value for money in terms of production.

It is said that Spice Diana and her team pumped a whole 350 million Ugandan shillings into her cricket Oval concert with production only costing Shs150M. Spice Diana’s production done by ATS is so far the most talked about more than any other local concert that has been staged in Uganda. She invested highly into production that gave the showgoers good stage, and lighting, and although the sound was not the best, the stage was beautiful. It was the first time Spice Diana was taking the show to Cricket Oval as the previous shows were at Freedom City and Front Page Hotel in Namasuba.

If there is a duo that has grown each year is the one of DJs Slickstuart and Roja. The two have come a long way and apart from being a duo, what defines them is the Mixtape Party which they recently held in its 8th edition. Slickstuart and Roja started the first Mixtape party event at Venom Beach bar formerly located on Tirupati Mall and moved to Laftaz Swimming Pool, Golf course Hotel, and finally Kampala Serena Hotel. The show at Serena Hotel held in November last year is said to have cost the duo Shs100M. The production and venue set up for the 8th season of the Mixtape party were beautiful and top-notch as the venue added the aspect of turning the show into a strictly VIP show.

History was made when singer Sheebah Karungi came out strong with her two days concert. ‘Sheebah Live in Concert’ happened at Kampala Serena Hotel on Friday and Saturday with both days selling out. Sheebah worked with Fenon Events as the production company for the two days of the show. Sheebah’s show was one of the most talked about shows in December as we ushered into the year 2023. From the stage to the sound, to the production everything was on point.

A few years ago, Fik Fameica held his second show at Kyadondo Rugby grounds but the show registered a very low turn-up despite the good production. Famieca got a lot of backlash from the media and social media users. He however didn’t lose hope in any way but rather kept on doing good music. Last year, Fik Fameica took the show to Hotel Africana people’s space and filled the venue. This time he was ready for his fans as everything was on point, the production by Fenon Events a big stage with good lighting and perfect sound. It is said that he spent a reasonable amount of money to see that happen.

Levixone’s ‘Mbeera Concert’ happened on November 28th at Kololo Airstrip. For those who know the venue, it is said to be one of the most expensive and Levixone went for it after having failed to acquire Namboole stadium since it is under renovation. Those that attended the ‘Mbeera Genesis’ concert can attest to the fact that the production was worth every penny. Levixone was the first artiste to have a main stage and a mini stage that enabled him to interact with his fans in the ordinary section. Done by Fenon Events.

Finally, the first music festival to be organised by a Ugandan musician came to pass on November 12, 2022, two years after it was announced. With two stages put together by Fenon Events, the festival had the biggest line-up. The festival which was held at Kololo airstrip saw the revellers get rewarded by the Prime Minister of Uganda, Robina Nabanja. The show was sponsored by different media houses and Fenon Events did its magic with production.

After 8 years of singing, twerking, and insulting whoever attacked her, singer Winnie Nakanwagi aka Winnie Nwagi had the chubby, curvaceous, and slim ladies flock Lugogo Cricket Oval to help Fire Baby break a record of the highest-attended local concert in Uganda. It happened on September 9, at the right moment for the right artist. Winnie Nwagi’s maiden concert was organised by KT Events. Her production was okay though there was a glitch in sound from time to time.

Juliana Kanyomwozi returned on stage at Serena hotel after nine years of stage absence. Her concert date August 19, was the same concert date for singing trio B2C and it proved that even partiers can be characterised into classes as both shows were successful. It was a classic show that proved that good music is timeless. Swangz Avenue was behind the production and they pulled it off well.

Her maiden concert at Lugogo Grounds was on July 22, 2022. It was a magnificent Swangz Avenue production, with Azawi’s talent, and Winnie Nwagi’s performance. For the first time in years, the lighting, the sound, the stage, and the performance of an outdoor concert were all perfect.

Unfortunately, Ugandans will not sway to the live vocals of King Saha on Valentine’s Day. He had proved at the Tusker Malt cover sessions that his live performance is a force to reckon with and KT events were about to make it happen.

Ykee Benda also shared a poster on his social media platforms last year stating the dates of his concert. He announced that his 2023 concert will be held on May 13, and we can’t wait to see how it goes.