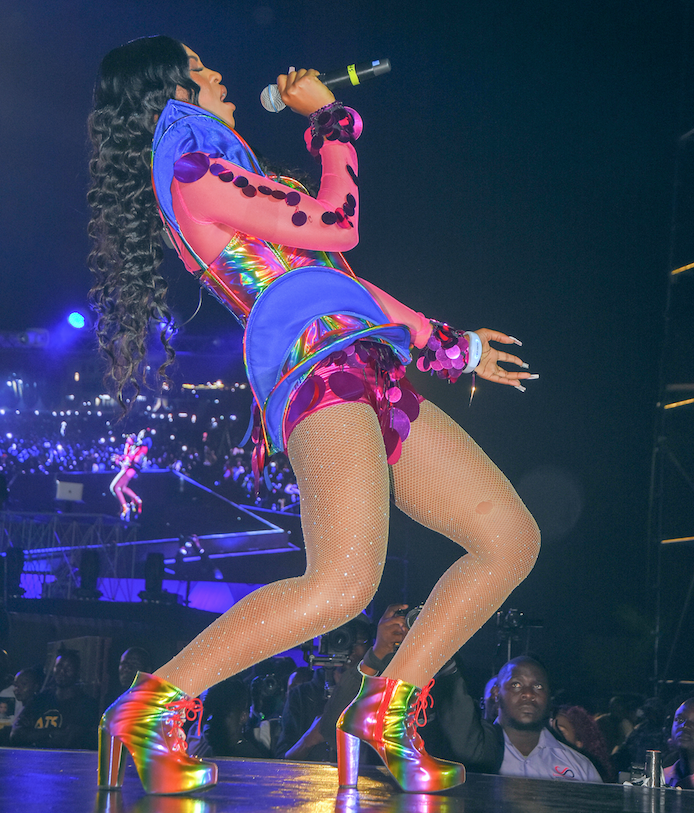 Apparently Spice Diana was unable to finish her show the way it had been curated because of police. Photo | Michael Kakumirizi

By Thursday last week, the roofless gigantic stage mounted at Lugogo Cricket Oval for Spice Diana’s scheduled show was up.

The 70-meter stage constructed by ATS, was the talk on social media, with everyone praising its grandeur and uniqueness.

According to Adam Juuko, one of the directors at ATS, they wanted to do a 3D stage where everyone could watch the show and Spice Diana’s Siri Regular show was that moment for them. Like the song/show’s title name, they wanted something different – not your regular stage design, production, props, among others.

This was a good build up to the show that had been highly publicised for the past three months.

It was now up to Spice Diana and her team to live up to expectation and last Friday evening was judgement day for the singer.

Having had three previous concerts and all selling out, her team decided to take on a bigger venue  – Cricket Oval.

Despite Spice Diana telling us that the choice of venue was mainly for the comfort of her fans, the fans instead wanted to prove something, going by the numbers that turned up.

And from what we saw, Spice Diana has surely earned her seat next to Winnie Nwagi and Cindy, who have both previously garnered huge crowds at their concerts.

To make it even more interesting, the organisers dished out lighting wrist bands to revellers to give it a different atmosphere.

By 3pm, people were queued at the venue and by 9pm, the only gaps were behind the giant stage, extreme back in the ordinary section and then behind the highly constructed VVIP.

After a seven-minute fireworks display, Spice Diana came on the walkway of the stage with more than 10 dancers a few minutes past 9pm.

She kicked off her show with Jangu Ondabe, Batutaade, Bajikona and 32, among others in her first session before leaving the stage for Shakira Shakira, Big Eye and King Michael.

It was, however, David Lutalo who gave the show some uplifting with Eat Zote, Yankutude and Kabisi Kandagala.

Spice Diana returned to the stage at 10:38pm with Ready and Now before thanking the crowd for turning up in big numbers.

“Tonight is all about history. We have made it. We have made the difference,” she said before doing Kyuma, her collaboration with Radio and Weasel and letting the crowd know how it is one of her favourite songs.

Barbie Kyagulanyi also made an appearance on stage, gifting Spice Diana a bouquet of flowers to appreciate her charity efforts.

What followed next was a marathon of performances from Mudra, Winnie Nwagi, Sheebah and Pr Wilson Bugembe, each doing two to three tracks back-to-back.

With her catalogue of songs that include a number of collaborations, Spice Diana only did Emala with OS. She did the rest of her hits; Omusheshe, Ready, Ndi Mu Love and Body on her own yet Nince Henry was in the audience.

According to a social media post by Nince Henry, the show had been scheduled to end at 1am but they were ‘interrupted’ by police to end the showby 12am.

Sound at the show was not all that good. Some sections of the audience could barely hear the performers and the microphones needed some adjustment despite the show having a very good backline with Myko Ouma and Emma Dragu among others.

Mudra, who was meant to have a good performance going by the crowd’s reaction, was messed up by the three emcees and two deejays, who decided to join him on stage as he was singing, outshining his performance.