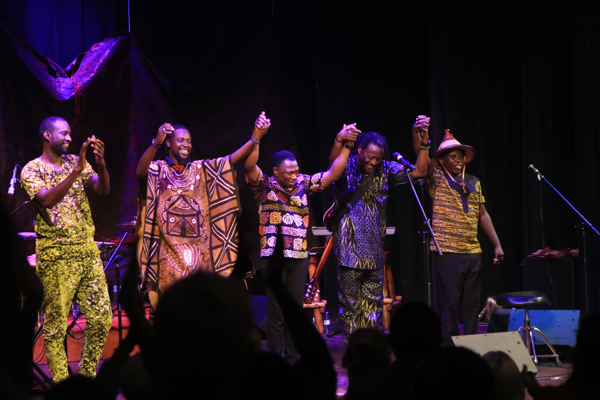 When the trio got on stage, they meant business. Photo / Andrew Kaggwa

A Kora, a West African musical instrument, thumb piano and shakers are some of the things that easily signal a Joel Sebunjo concert. In the early 2010s, when many people had just learnt about his music, he was a regular at many Kampala artsy events.

It was around that time that he appeared on the first season of Coke Studio and later, a concert at the National Theatre.

For a big part of the past 10 or more years, Sebunjo has been a poster boy of ‘other’ music. Not usually understood, he, alongside artistes such as Myko Ouma, Herbert Kinobe, Jude Mugerwa and later Susan Kerunen, among others, became a force behind Uganda’s world music scene.

Sebunjo, on his part, has travelled, performed at various festivals and released music with people he looked upto. From his album, I Speak Luganda, where for the first time the artiste decided to trade Manding from West Africa for Luganda, then he has worked with Ivorian Aly Keita and Cameronian Kareyce Fotso. 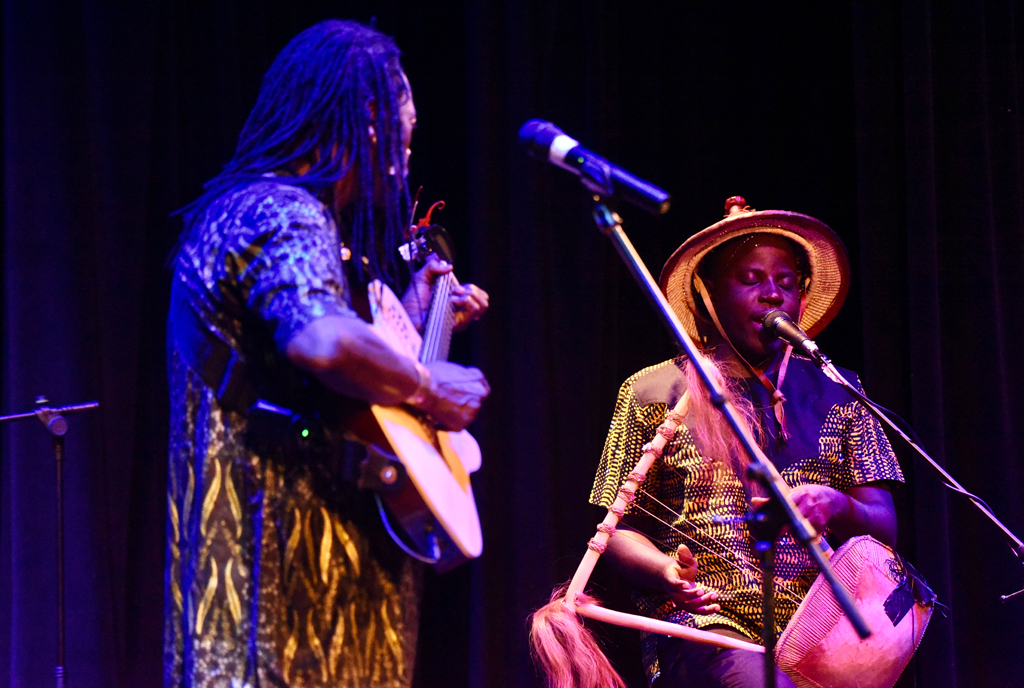 On the guitar is Habib Koite playing alongside Sebunjo. Photo / Edgar R. Batte

On Friday, alongside Malian world music sensation Habib Koite, his friend Keita, they put up one of the biggest world music concerts this country has seen in a long time.

Aptly titled the Ganda Mandingo Syndicate, it was the first time Sebunjo was performing in Kampala after his 2017 concert at Sheraton Kampala Hotel gardens, yet it was also his return to the National Theatre, a place where his music was honed a few years ago.

For the show organisers though, Alliance Francaise, the show was a homecoming of sorts too. Initially, the institute was located at the National Theatre before moving to Mckinnon Street and later Bukoto Street.

This year, the institution has embarked on different cultural programmes with the Uganda National Cultural Centre (UNCC) and since the creative economy was opened, they have hosted a concert between French artiste Alicia and Janzi Band, Fete de la Musique (World music Day) and this.

In fact they promised more shows of the kind.

On Friday, the trio; Sebunjo, Keita and Koite walked onto the National Theatre auditorium stage and meant business. With a balafon, Keita was there to outdo himself, while with his guitar, Koite was supposed to live the part, the elder and the superstar he is. Now Sebunjo had the home advantage, he had to entertain but also perform as a trio. 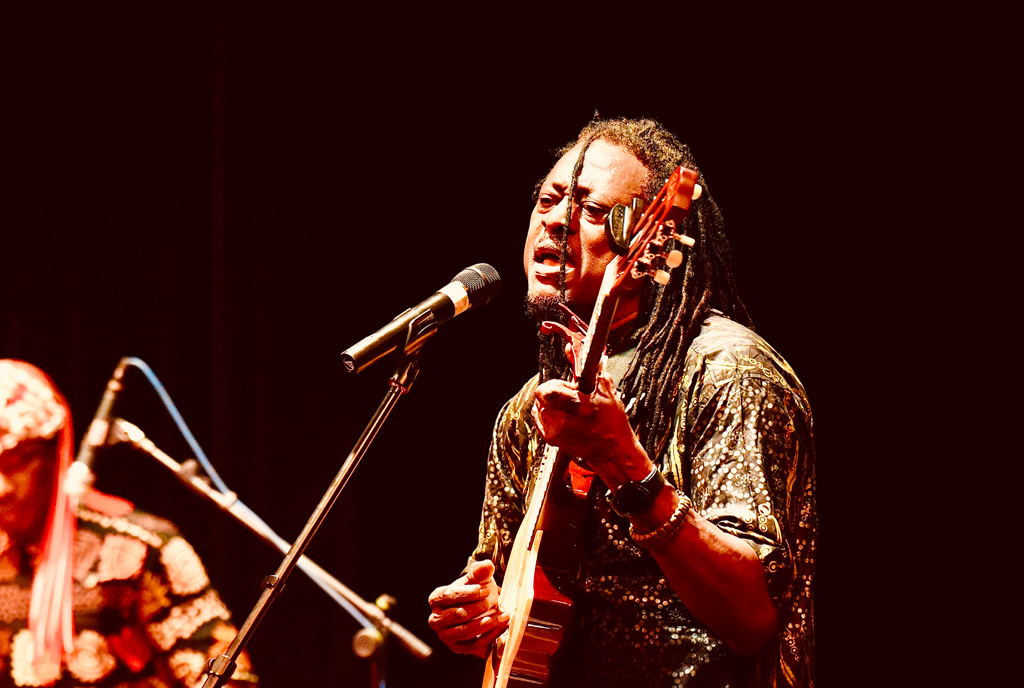 They were not a trio with an arsenal of hits, but one with melodies, skills crazy enough to get an auditorium on its feet. Many of the people who showed up were there for a particular artiste; some were into Sebunjo’s music, while there was almost an army of people there for Koite. But still, even those interested in just one of the artistes at least knew a song by the other.

For instance, when Sebunjo did his first song of the night, Empale, there was clearly a group not familiar with the song but managed to hang on because the other two were bringing their own touch to the song. The song off the I Speak Luganda album is catchy as it is rich with instrumentation, a fusion of it with Koite and Keita’s guitar and balafon respectively made the song an experience.

But a big part of the night had been an experience, seeing Koite, for instance, perform Wassiye, from his 1998 album Ma Ya, a song that probably raised every lover of African contemporary music in the late 1990s. You could see the audience loosening up and singing to lyrics they do not understand.

The song had, however, gotten the audience on their feet after the man had only said the first word from the lyrics. Because of its cult popularity, many could tell which it was and for a moment, the auditorium was a chorus, not necessarily in harmony though.

Then Keita, whom Ugandans have been lucky to see thrice, was electrified while playing the balafon and most of the times slow to acknowledge that he is indeed one of the few remaining balafon players in the world. 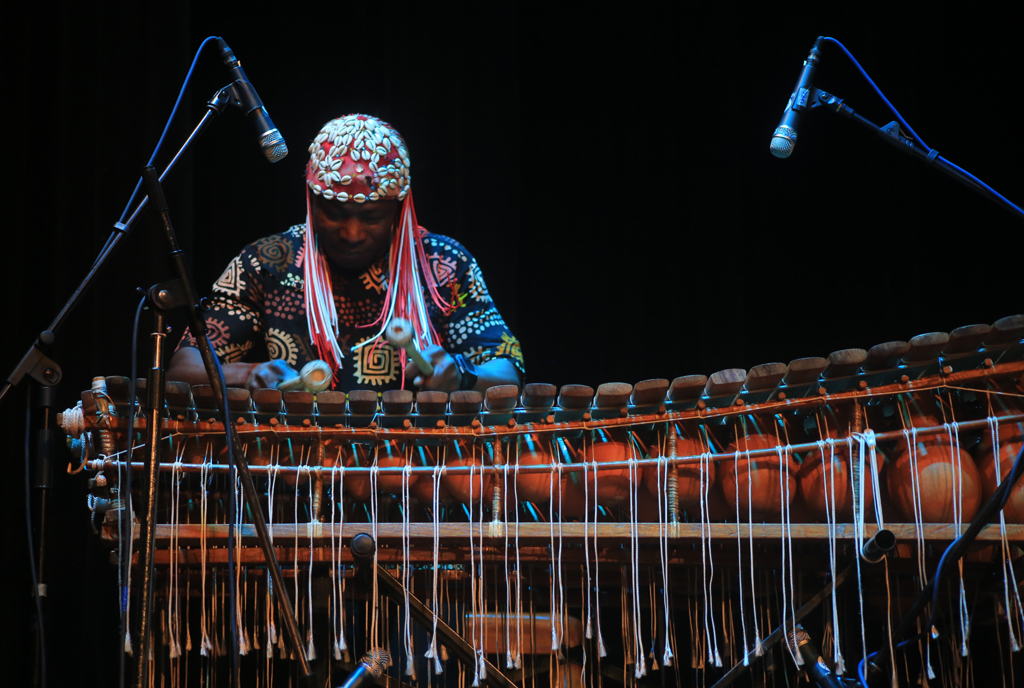 Like many African instruments, the balafon was originally a one scale instrument, yet, with people being ambitious and stepping up instruments, what Keita plays is a two-scale balafon. With it, he can do everything one can with a piano.

The trio kept the audience busy that even when they played Bulungi, one of Sebunjo’s most renowned song, people refused to leave, seeing them return to do a cover of Miria Makeba’s Malaika.