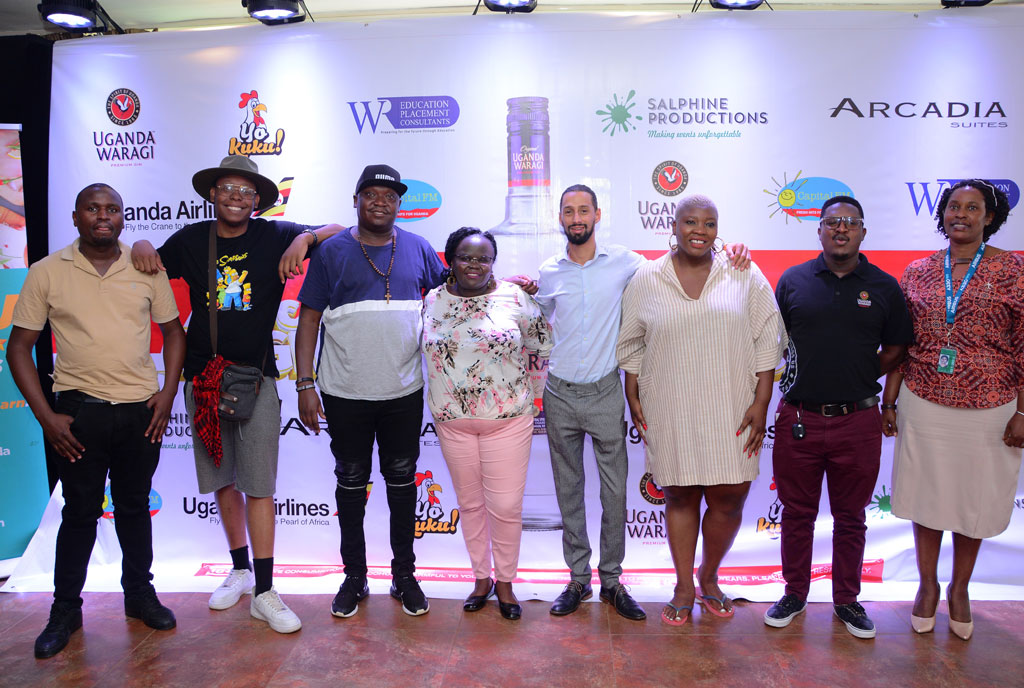 Patrick ‘Salvador’ Idringi (Third Left) with some of the comedians set to perform tomorrow and some of the event sponsors after the press conference at Arcadia Hotel this morning. Photo Courtesy

Uganda Waragi has today announced its sponsorship of Ugandan comedy through several comedy shows that will run across the country for the foreseeable future.

The announcement was made by Uganda Breweries Limited’s Brand Manager Mainstream Spirits – Hillary Baguma – during a press conference at Arcadia Suites Hotel.

While addressing the media, Baguma said, “Ugandans are inherently happy people, and besides Uganda Waragi, laughter is another of the unique things that unite and bind us as Ugandans. And as a brand, we are looking to delve deep into the heart of comedy to bring to this country the very best comedic experiences available boldly and vibrantly.”

According to Baguma, the brand will be supporting comedy in an initiative that will see several talented Ugandan comedians like Salvado, Madrat and Chico, Alex Muhangi, Fun factory, and others entertain audiences in several parts of the country.

Our support into comedy will give young, talented, up and coming comedians from all over the country a platform to show case their comedic talent.

This partnership starts with ‘Africa Laughs’ comedy show – a brainchild of Patrick ‘Salvado’ Idringi – that is slated to take place on Friday 28th October 2022 at the Kololo Ceremonial grounds from 5 to 11 pm.

This will be the sixth edition of the show featuring top African Comedians like Loyiso Gola from South Africa, Gordons the comedy Berlusconi from Nigeria, Celeste Ntuli from South Africa and Q-Ndube from Zimbabwe, Eric Omondi from Kenya and some of Uganda’s best comedy acts like Anne Kansiime, Madrat and Chiko, Prince Ehma and more.

While addressing the press, Salvado said, “Africa Laughs started as a dream to highlight the very best Ugandan and African comedic talent on a bigger stage than we were used to, and we are honoured to have Uganda Waragi on board because it is a brand that understands the true essence of Ugandanness and will make this edition a truly memorable experience.”

UBL’s Baguma added, “Uganda Waragi celebrates all things uniquely Ugandan, and now, as the patrons of Ugandan comedy, we shall be celebrating all the things that make us proudly Ugandan through laughter and music.”

The organisers promised a safe and organised event.