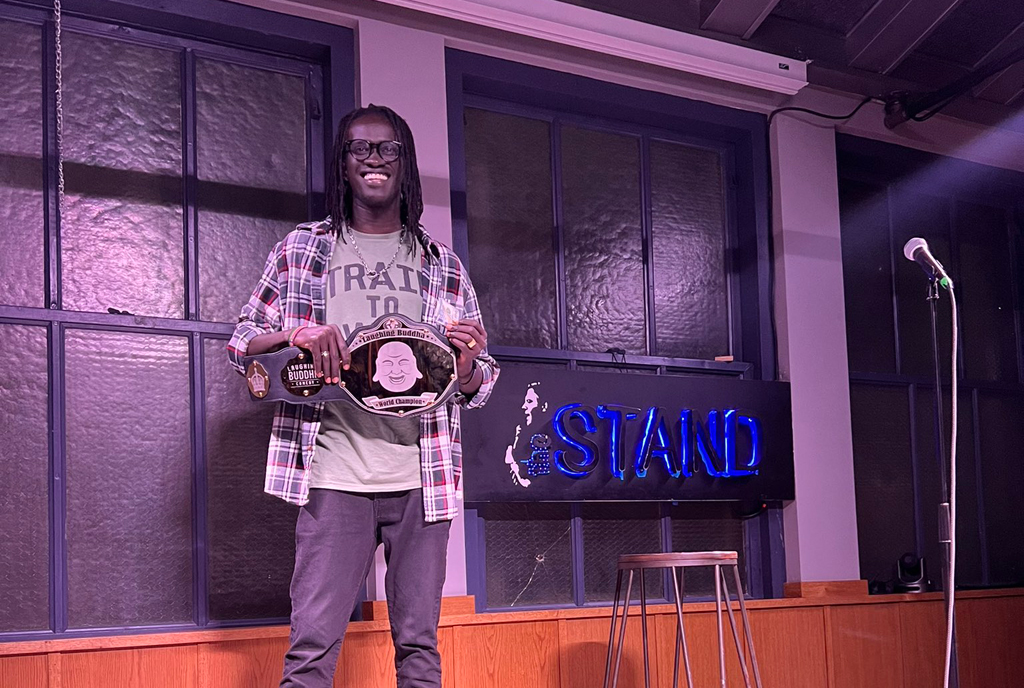 Young South Sudanese Comedian who is currently on tour in the U.S after completing his participation in the Mandela Washington Fellowship in August. It is a US government funded program under Young African leaders Initiative to support young African leaders all over 43 African countries. The Comedian was attached to Michigan State University and later Alliance Theater in Atlanta.

He seized this opportunity to tour some of the great American Comedy clubs like The Laughing Skull, Punchline in Atlanta. Akau couldn’t hold his joy as he took to social media how excited he was to perform in a comedy club that has hosted some of the comedy legends like Dave Chappelle, Kevin Hart, Katt Williams and so many more.

Akau who is currently in New York got to compete at The Laughing Buddha comedy battle against 7 other comedians where he emerged as the winner for the night. This is a great opportunity for Akau to get noticed in the New York Comedy industry.

He shared the exciting news on his social media pages. “I just won the Laughing Buddha Comedy Battle at The Stand in New York! I’m already winning Election Primaries guys. I think I’m ready for Presidency In 20….. whenever they decide to hold elections ? @TheStandNYC @LaughingBuddhaC,” he posted.

I just won the Laughing Buddha Comedy Battle at The Stand in New York!

He will also be performing in some of the best comedy clubs in New York like The Comedy Strip, New York Comedy Club, The Stand and so many more alongside regulars like Ryan Dacalos and Giulio Gallaroti who made he is Netflix Standup debut in 2022 on “Pete Davidson Presents: the Best Friends”

The comedian will also be watching “The Daily Show” Live in New York. He couldn’t hold his excitement as he will be able to watch Trevor Noah; the person that inspired him to start comedy in person.