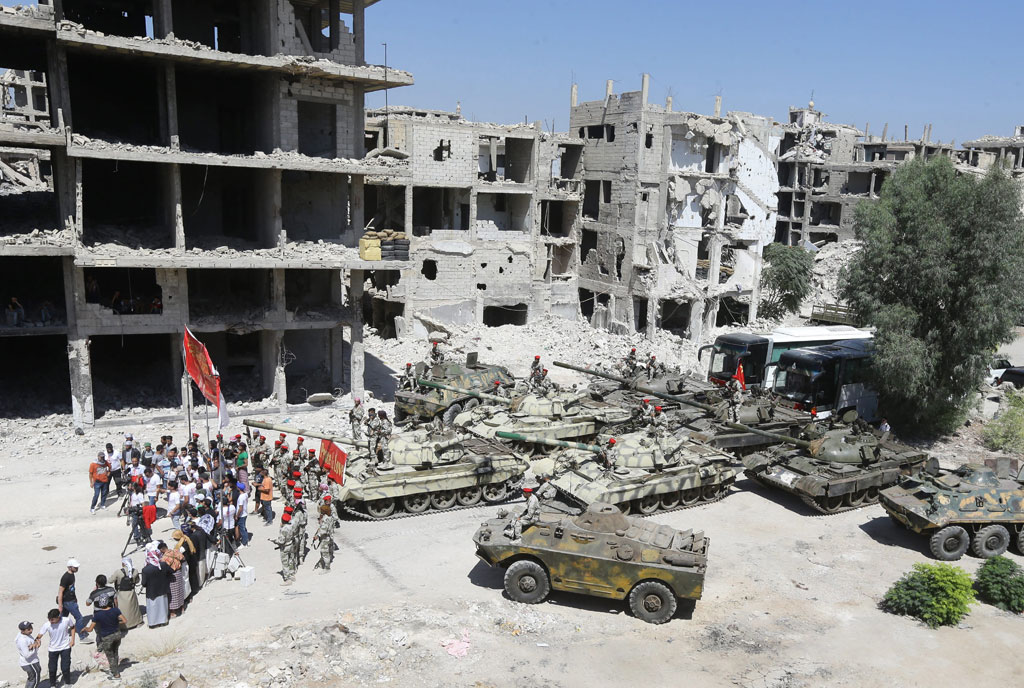 Actors are pictured in the Hajar al-Aswad neighbourhood of the Syrian capital Damascus on July 14, 2022, during the filming of a scene in a film titled “Home Operation”, a Chinese-Emirati joint venture produced by actor Jackie Chan and inspired by real events of the emergency evacuation of Chinese and foreign nationals and diplomats during the early days of a civil war in Yemen in 2015.PHOTO/ AFP

A ghost town since a 2018 operation to flush out jihadists, Hajar al-Aswad near the Syrian capital has come back to life as the location of a Jackie Chan-produced action movie.
“Home Operation” is inspired by China’s 2015 evacuation of Chinese and other foreign citizens from the war in Yemen, an operation that was seen as a landmark for Beijing.

Yemen was deemed too dangerous a venue to shoot and some scenes of the film, which is also backed by an Emirati production company, are being shot in Syria, although the script only mentions a fictional country called “Poman”.
The ruins of Hajar al-Aswad on Thursday filled with a motley crew of actors in Yemeni tribal attire, Syrian extras in uniform and polo-wearing Chinese film crew members.
Jackie Chan is the main producer, although there are no plans for him to visit Syria.

The film pitches itself as a blockbuster that will glorify the role of the Chinese authorities in a heroic evacuation.
Speaking to reporters as his crew installed their equipment and tanks in hastily altered livery moved into position, director Yinxi Song confirmed the film’s propaganda credentials.
“It takes the perspective of diplomats who are Communist Party members, who braved a hail of bullets in a war-torn country and safely brought all Chinese compatriots onto the country’s warship unscathed,” he said.

The ambassador of China, one of few countries to have maintained good diplomatic relations with the regime of Syria President Bashar al-Assad, was present to launch the Syria shoot, which is expected to last several days.
A red banner in three languages was unfurled for the small ceremony and another that read “Peace & Love” was propped up on the front of a tank.
‘Low-cost studio’
Hajar al-Aswad, which means “black rock” in Arabic, was once a densely populated Damascus suburb that lies next to the Palestinian refugee camp of Yarmuk.
Both areas became major hotspots in the Syrian civil conflict that erupted in 2011 and were at least partially controlled at one point by the Islamic State group.
The reconquest of both neighbourhoods by Syrian pro-government forces in May 2018 marked the moment the regime brought the entire capital Damascus back under its control.
Swathes of Hajar al-Aswad were completely levelled, however, turning the neighbourhood into a sinister sprawl of grey, gutted buildings.

A few residents have returned to the least damaged parts of Hajar al-Aswad, leaving the rest completely uninhabited.
“The war-ravaged areas in Syria have turned into a movie studio. These areas attract film producers,” said director Rawad Shahin, who is part of Home Operation’s Syria crew.
“Building studios similar to these areas is very expensive, so these areas are considered as low-cost studios,” he said.
The production team says it plans to use several other locations to film in Syria, where productions from Iran and Russia, both allies of Assad, have also been shot.
Syria is targeted by a raft of international sanctions and is also littered with unexploded ordnance which last year made it the world’s most lethal country for landmine kills.

Chinese navy vessels carrying out anti-piracy patrols were diverted to Yemen in 2015 to evacuate what officials at the time said were hundreds of people from 10 different countries stranded by the escalating conflict.
The successful operation was touted by Beijing at the time as a proud moment for its navy, evidence of its humanitarian principles and of its growing global reach.