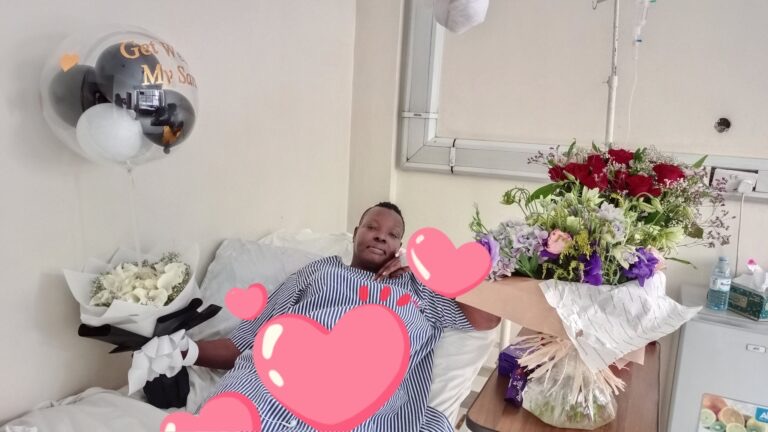 There have been a lot of questions regarding the whereabouts of celebrated fashion icon Santa Anzo.

The Arapapa proprietor last appeared in the news in 2019 during the 10-year- celebration of her Arapapa agency.

Her absence on the scene has been intentional as she has been down with life-threatening tumors.

The fight with the tumors took 10 weeks but three months before the open myomectomy surgery, 10 tumors were sliced out of her body, Santa said she was going through a nightmare and she shared her story recently on social media.

“Grateful to God for a fresh lease of life: Exactly 10 weeks ago, my belly was cut open. Not the usual bikini line surgery. My case was so severe that my doctor could only cut from up to down. I felt split up into two parts.

The three months before surgery were the nightmare of my life because of the size of the tumors my Doctor put me in “Menopause mode” this was due to a drug that would help shrink the tumors by at least 50% otherwise he could not do the operation. I lived life in limbo,” reads part of her narration.

She added that trembling in a specialist hospital in Dubai where she went to seek a second opinion, with a specialist Obstetrician/Gynocologist, her body trembled, her heart raced as he sat her up and straight and asked. How have you been living with this?

His scan revealed that she had several tumors. “Your body is exhausted; your entire system is struggling. You are living in the body of a 7-month pregnant woman-except you are carrying tumors not babies” she had long given up exercising because the pain was unbearable.

She would stay in bed for hours trying to wake up but fail, work was a struggle and could not keep client appointments. She cancelled most projects in the last three years.

She went into depression because the doctor told her he couldn’t locate some of her organs and how the tumors had taken over. “How is my uterus?” she asked to which he replied that he doesn’t know. She then asked whether she will ever have children but the reply she got was of him shaking his head in pain and disappointment and telling her he can’t find her ovaries.

He then told her that the biggest concern is saving her life because her kidneys look suspicious, and liver and all major organs were pushed out of position.

However, Dr Romano Byaruhanga and Kampala Medical Chambers Hospital did the needful.

“Dr. Romano refused to embrace the long gloomy report l brought from Dubai. I don’t remember him paying attention to scans/reports. He told me they had a solution and that I was going to be just fine and wouldn’t be going to Dubai, South Africa or anywhere as the surgery would be carried out in Kampala.”

After the surgery, she was given photographic evidence; uterus ovaries. “”I am now healed. Whole, and ready to rock again. All of you who prayed and came to visit me, thank you for your heart and love.”