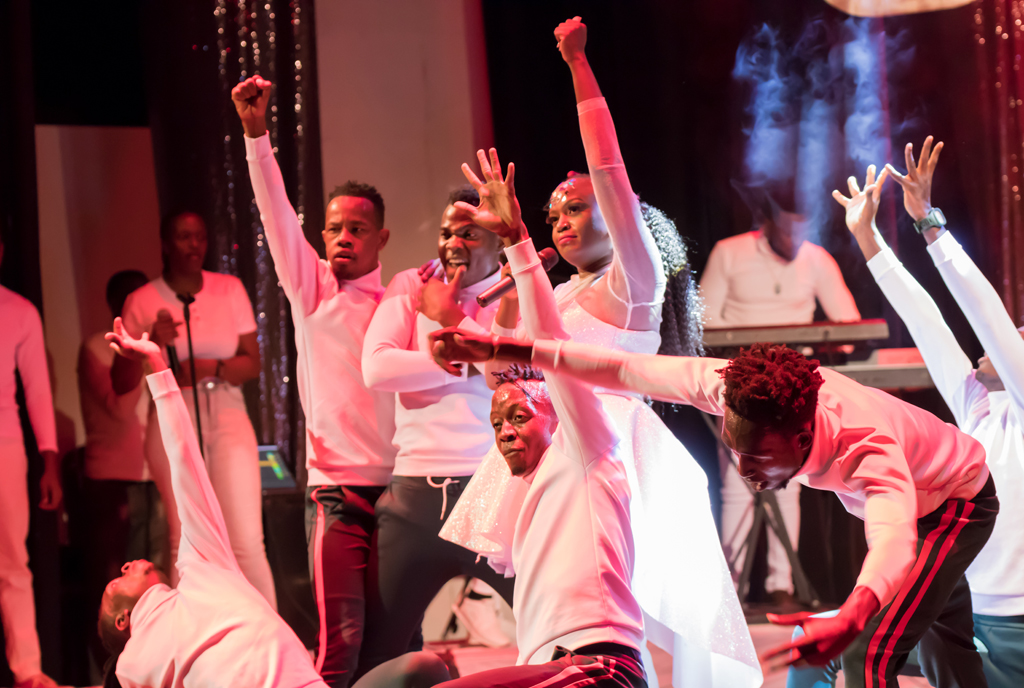 Sandra Suubi on stage with some of the performers. Photo / Andrew Kaggwa

Spectacle! That could best describe inspirational singer Sandra Suubi’s recent concert at the National Theatre. For her show, aptly titled The Sandra Suubi Music Experience, the artiste decided not to simply show up and sing but feed the eyes of her audience.

From the time the show kicked off, she and her team were clear about their vision – to give the audience something they had not seen before. From the clean silhouette dance routine that opened the first set, the vocals of her back up to Suubi descending from the stage roof. They were not only moments, but made you feel a certain way even after the show.

She had broken her time on stage into three sets, which all present the trajectory she has been taking both as an artiste and visual artist. For instance, the first set was inspirational or gospel, while the love ballads came after and she later closed with music on environment advocacy.

Yes, Suubi has been passionate about the environment since her days in the famous Airtel singing competition which she won. Then, most of her advocacy was done with visual works, recycling plastic and creating installations for awareness on plastic waste. In fact, one of her installations is still standing tall at Ggaba Landing Site.

But recently, she has done songs on humanity, life and nature.
Her gospel set featured songs mainly from her first two Eps; Anthems of Life and Anthems of Praise. On songs such as Nsiimye, she even invited testimonials and there were people willing to share things about their life and how the music spoke to them.

Model talent manager Joram Muzira, for instance, said the song is an assurance for him and the models.

“This song speaks to me so much because I started out in the business at a time when people did not look at modelling as a real career. We sing it with the girls before the shows start,” he said.

Powerful show
Suubi’s opening was powerful as she managed to get her audience off their seats in less than 10 minutes of being on stage. And being an interactive character, she often engaged them.
In other performances, she was joined by some of her backup singers for duets, but many still talk about Tuli Njiibwa, a collaboration with soul artiste Kenneth Mugabi. This was during her love ballad session where she also sang a special song, Father’s Love, for her father. The two songs appear on her 2021 EP, Mutima, which also featured songs such as Guluma and Nkwagale.
She closed her show with patriotism songs, including Togwamu Suubi, where she started off by rapping Benezeri’s verse.
In the end, it was a spectacular concert that still had its flaws such as the overbearing dancers that were a bit all over the place.
akaggwa@ug.nationmedia.com