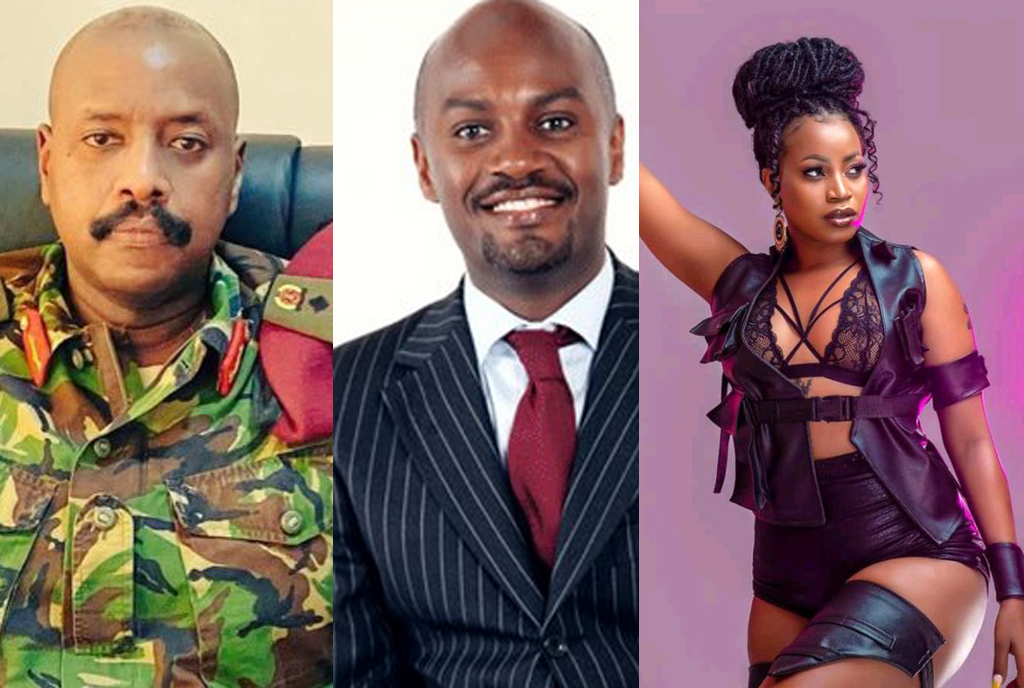 The First Son and Commander of Land Forces, Lt. Gen. Muhoozi Kainerugaba on Friday said he had interrogated renowned journalist and businessman, Andrew Mwenda over allegations of his involvement in the reported sexual harassment and attempted rape of musician and dancer, Sheebah Karungi.

“I have read all your comments about @Ksheebah1. I have seriously interrogated my brother @AndrewMwenda and he says he has never met the lady. So, this is definitely another fake story!!” Muhoozi tweeted hours after Mwenda posted a long post on his Facebook wall distancing himself from the allegations.

I have read all your comments about @Ksheebah1. I have seriously interrogated my brother @AndrewMwenda and he says he has never met the lady. So, this is definitely another fake story!!

Sheebah early this week left tongues wagging on social media after she made damning revelation of how she survived being ‘raped’ by a senior popular official who was being guarded by the Elite Special Forces Command soldiers.

“I don’t care what you think about when you see me on stage or in any of my videos dressed the way I dress up, you better respect my body. It’s MINE, I get to do whatever I want to do with It. You don’t. You can watch but you certainly can’t touch,” she said.

In the video posted on her Instagram, Queen Karma, as she likes referring to herself says her ordeal was during one of her shows in town.

“I had a show. I was performing for one of those people you respect and call real role models that pretend on TV to be good……This old pervert was trying to be funny with me in  my car. He and his security just came and opened my car door as I was sleeping waiting to be called on stage by my manager. He was trying to be inappropriate in front of my team members; no shame, no remorse…I so angry that I almost didn’t perform but I respect my job” narrated the Nkwata Bulungi singer known for her skimpy, steamy dress code and erotic dance moves.

“Why do you look at women as objects? Don’t you have daughters? If you want to sleep with a woman please ask nicely,” the former Obsession dance group member wondered.

VIDEO: Respect My Body – Sheebah ‘Lashes Out’ Over ‘Sexual Harassment’

After her video, Sheebah’s followers started speculating about the suspect and the event where she was sexually harassed.

However, Mwenda on Friday morning posted and said he had never known any Ugandan musician called Sheebah Karungi until early this week when she posted the video and his name was dragged into the allegations.

According to Mwenda, he tried reaching out to Sheebah to clear his name because he has never met her but to no avail.

I have talked to the director of CID who has agreed to open a case to find out the person who allegedly raped singer Sheeba Kalungi. Police are going to call her and ask her to reveal the offender. Sheeba is being disingenuous in hiding the true rapist as social media lynch me.

“I find it strange that a woman of her stature can be violated in such a humiliating and painful experience and instead of reporting the offender to the police, she takes the matter onto social media. To gain what? Sympathy? Why not seek justice through the police and the courts? In any case she could have pursued both: sympathy in the public sphere and justice in the courts of law,” Mwenda said.

According to him, Sheebah’s ambiguity about the event where she performed and got “raped” is “clearly aimed to make people believe she was at Muhoozi’s birthday, which again scores for her more social points as an entertainer at such a high profile event.”

I have read all your comments about @Ksheebah1. I have seriously interrogated my brother @AndrewMwenda and he says he has never met the lady. So, this is definitely another fake story!!