Fortunes of city shisha smokers go up in cloud 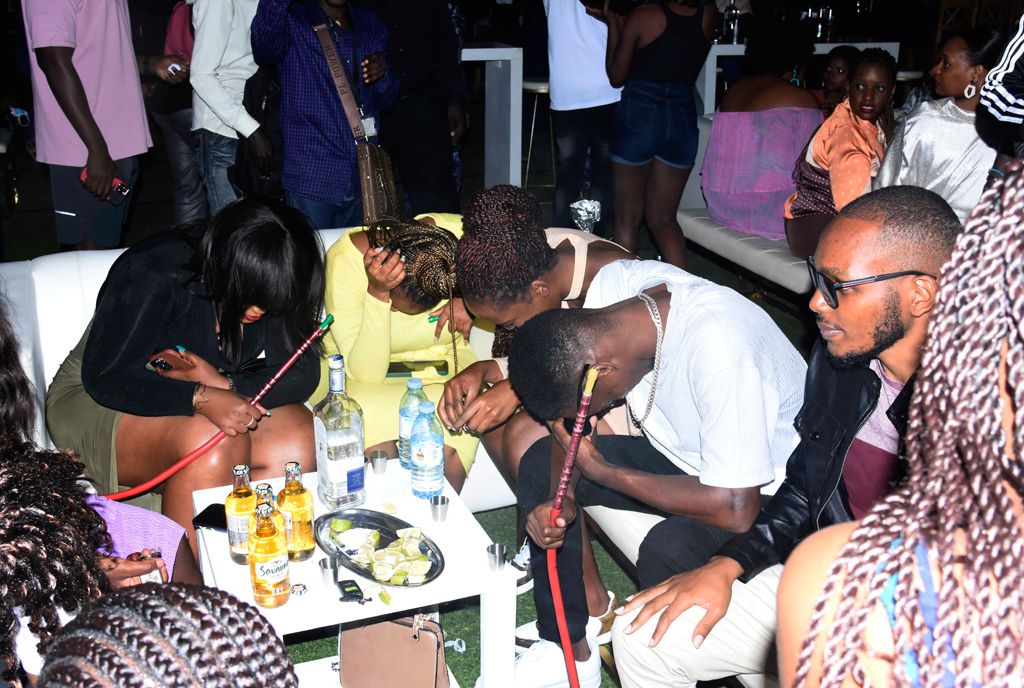 Revellers at Icon Bar at Forest Mall in Kampala who were caught smoking shisha during Sunday’s operation. photo/ ISAAC KASAMANI

Police on Sunday arrested 38 people who were caught smoking shisha in various bars and hotels around Kampala.

This was part of an anti-shisha use operation mounted by the Ministry of Health in collaboration with the Uganda Police Force and Kampala City Council Authority.

Shisha also known as a narghile or goza or hookah is a water pipe with a smoke chamber, a bowl, a pipe and a hose. Specially made tobacco is heated, and the smoke passes through water and is then drawn through a rubber hose to a mouthpiece.

Those arrested were detained at the Central Police Station, Kampala.

The operation was carried out in the areas of Munyonyo, Makindye, Bugolobi, Buziga, Kamwokya, and Forest Mall Lugogo where more than 100 shisha bowls and pipes were also confiscated.

The exercise started at Forest Mall Lugogo at around 7.30pm and many of the culprits were skimpily dressed young girls.

At Meley Impala Hotel run by an Eritrean national, the manager disconnected power in some parts of the facility and locked himself in one of the rooms.

During the operation, the team discovered a room where smashed redish and blackish shisha concoctions were being mixed with mint and orange flavours.  A notice on the door read ‘Staff members only allowed in conference hall’.

At the Hot Spar in Munyonyo, both shisha and marijuana smokers were arrested on the roof top and different rooms around the facility.

The team then headed to Levels Bar in Kamwokya but no one was found smoking shisha.

As they left Kamwokya, they were confronted by the proprietor of Hot Spar, Mr Godfrey Nyakana Amooti, who demanded to know why some of his clients had been arrested.

Although the team ignored him, Mr Amooti followed them to City Hall but was blocked from entering.

“Who are you? Tell me your ranks. I am number four in the ruling party. You can do anything you want. Come and shoot me,” the visibly angry Nyakana told the law enforcers.

While addressing journalists after the operation that ended at midnight, the National Tobacco Control Focal Person in the Ministry of Health, Dr Hafsa Lukwata , said the exercise was part of the activities for this year’s World No Tobacco Day celebrations slated for today.

Dr Lukwata said smoking of shisha in public lands offenders a six-month jail term or an equivalent of Shs190,000 fine for an individual and Shs480,000 for a bar or both. The amount doubles in case the offence is repeated.

“Some politician was telling us about his ranks. There was also an unfortunate situation where a reknown journalists tweeted whatever we were doing. He owes Ugandans an apology,” she said.  She said similar operations would be carried out in Gulu, Mbarara, Entebbe, Arua and Jinja, among others.