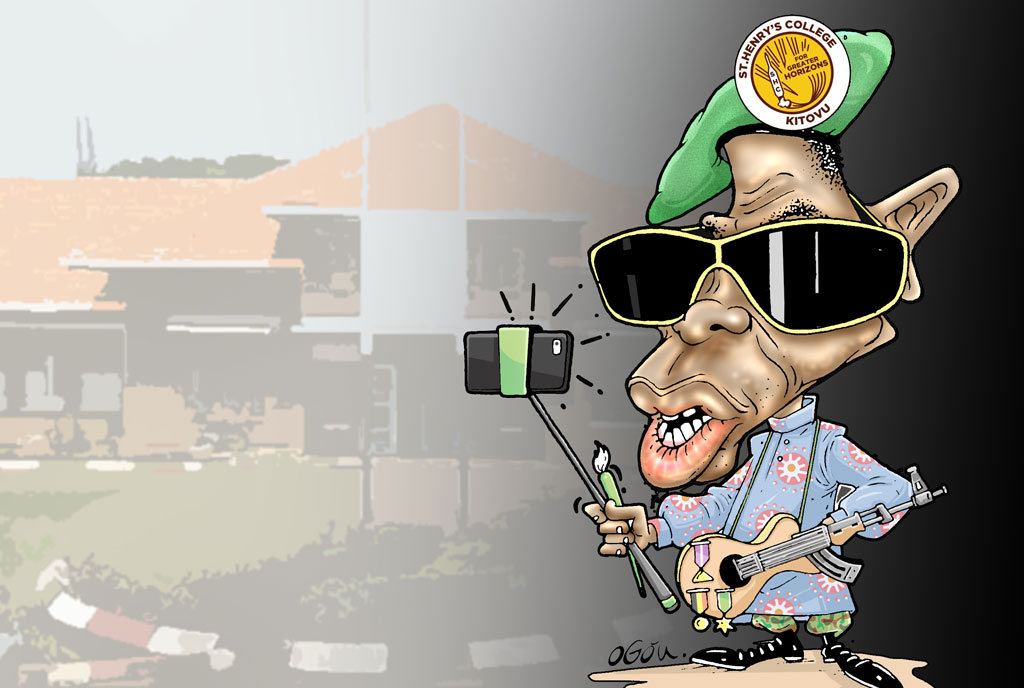 The hidden story: Somewhere in Masaka, on the hills of Kitovu, there is a school that is celebrating 100 years of existence. It is none other than St.Henry’s College Kitovu, aka Shack. How the ‘A’ became part of the acronym, no one knows. After all, that should be better than a Sunsas or Gungas abbreviation Smack has happened, Ntare has winked, Gungas knows it all, while Sunsas brings vibes to the table. But what about Shack?

If you have been around two Shack OBs, they will speak a language known only to them. It is their Shack creole, a mixture of Luganda, English, French, Spanish and Gibberish. Whereas an average Ugandan will speak about rice, a Shack dweller will say; ‘Ncereal’. For a Shackist, one word could have two meanings. ‘Kikafe’ can mean coffee, but it could also mean the stains on a shirt collar.

If you are a coward, in Shack language, you become a ‘Koyi’, if you are a brave and courageous man, you become a ‘Musolida’. But the language has also evolved over the years. There is not a single Shackist without a nickname. As a rule of the book, all those who have gone through the Shack gates must have a nickname.

For the Horizon girls, the name was ‘Dinosaurs.’ If you are dating a Shackist do your best to uncover their nickname. It is the key to unlocking their personality. That said, Shackists are also loyal cadres of Nkoba Za Mbogo. A Shackist would die if he went a day without making a Luganda statement.

Over the years, millions of schools in Uganda have claimed copyright to the Jabba dance. Thanks to the gods, a verdict has been given. Jabba was born in Shack, it was tortured in Namilyango and met its death in Kisubi. Without Shackists, the dance culture in Uganda would fall apart. From Jabba to breakdance to ‘Sebeke’, the Shackists have been dancing since the 1920s.

A Shackist will never turn down an opportunity to dance. He will dance at Bandali Rise, dance at home, dance at work, dance in business. Wherever the word ‘dance’ is mentioned, be sure a Shackist is nearby. Shackists are allergic to a lounging culture.

Unfortunately, Shackists cannot save themselves from the Masaka vibes. There will always be something that pulls a Shackist back to Masaka. He will either be obsessed about the Nyendo grasshoppers, or at least purchase a fluffy car dashboard cover. Back in the early 2000s, one famous teacher boldly proclaimed; “wherever a Shack passes, the whole Masaka must know.” Something will always betray a Shackist.

Something will always remind people that the man has been in Masaka. If you meet a Shackist, and you are yet to detect the Masaka chromosome, be worried of what is yet to come. And like all Masaka men, if you are dating a Shackist, the whole city ought to know.

A century ago, the Shackists invented a new type of sport, a special blend of soccer known as ‘Kikame.’ It would later cement its name with the Cameroonian style of football, the rough, unforgiving one. Kikame is a type of soccer with only one rule. The rule is that there are no rules.

If you have had a chance to travel to Copenhagen, then you must go to Christiania, a community with no rules. Kikame is the football version of Christiania. No rules, everyone gets to play how they see fit.

This personality trait is found in all Shackists. They believe the world can be molded, that everything is in a state of flux, that they belong everywhere, that they can be anything. Rarely will a Shackist specialise in life. A Shackist will be a lawyer, a politician, a scientist, a philosopher, a father, name it. Never ask a Shackist what he can do, he can do everything. If he is in business, he can supply everything.

Even when the whole world is scampering to safety, a Shackist will be walking gently to his destination. Whereas Subaru drivers will be dying not to miss the green lights, a Shackist will step on his pedal while grooving to some country music.

One gets this feeling that Shackists think of themselves as royals. Royals of Masaka?

Hardly should one find a Shackist residing in Najjera. It is an abomination. Shackists love space. While in school, they were corrupted by the ideas of a ‘Parado’. A ‘Parado’, aka ‘Paradise’, is that space one curves out for oneself. You must earn the right to enter one’s ‘Parado’.

The idea of a ‘Parado’ conflicts with the Najjera setup. In Najjera, if you open your door by mistake, you could end up in another person’s living room. If you risk and spend days without returning home, you could return to a winery setup in your bedroom. You may find Shackists in Naalya, in Gayaza, but never in a Kitintale, Namasuba or Najjera.

Shackists love to create. They will create anything out of nothing. Give a Shackist a book, and he will create a thriller. Give him a stage, and he will put up a performance. They are men of many seasons. It should also be said that these guys never ‘settle’. They are always on the move onto new things.  When a Shackist settles, be certain he has found gold. If you find a Shackist stuck in a place, look closely lest you miss Heaven on earth. Rumours have it that the Shackists have settled for Rubaga girls. One then must wonder, ‘what’s that hidden treasure in the Rubaga girls?’

Have you met a Shackist? Have you dated one? Have you interacted with one? Then let’s hear from you. Do they walk their talk? Or perhaps, they do talk their walk! To the Shackists, here is to the next 100 years!