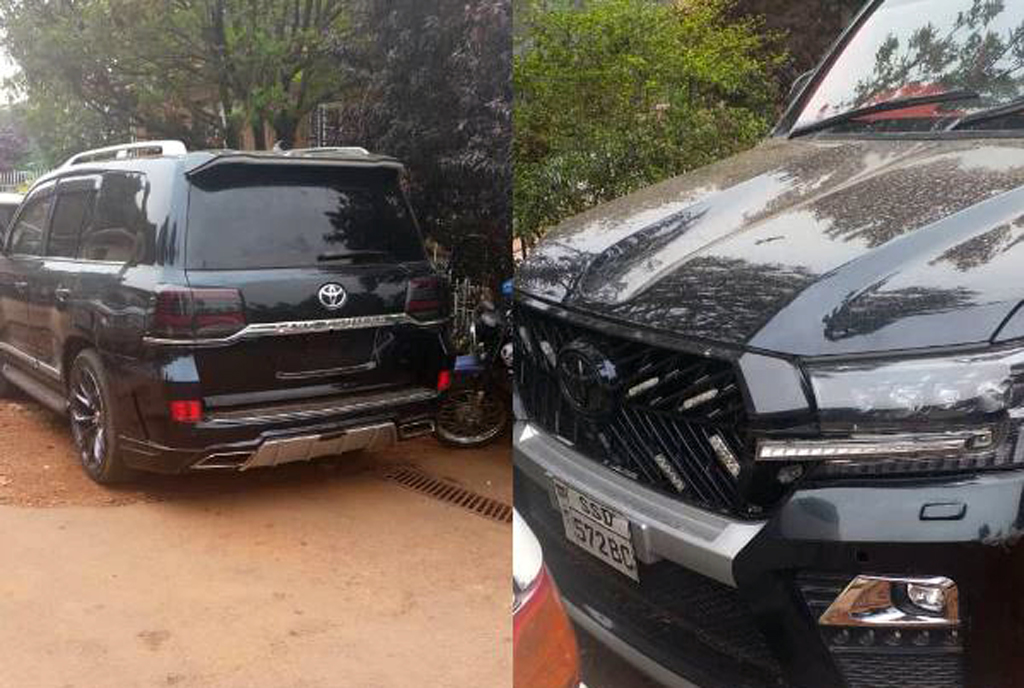 Uganda police have impounded one of the vehicles belonging to city socialite Charles Olim alias Sipapa following the directive from the Inspector General of Police (IGP) Martins Okoth Ochola to have them impounded for continuous flouting traffic laws.

READ: My Only Crime Was Giving Chameleone’s Wife 200k – Sipapa

Mr Ochola reasoned that Sipapa’s vehicles had become a menace on the road. This was after road users reported him to police for driving a numberless Toyota V8 vehicle for two months, in one way, knocking and threatening to shoot his victims.

“The matter was brought to the attention of the Inspector General of Police. It has been well acknowledged and instructions to the Police Traffic and Road Safety Director to ensure the vehicle is traced wherever it is,” Mr Fred Enanga, the police spokesperson said on Monday.

READ: If Anyone Thinks I’m A Robber, Go To Court- Socialite Sipapa

Over the weekend, the overzealous Sipapa who was driving a numberless vehicle in the company of armed security personnel was accused of knocking another person’s car before threatening to shoot him.

Sipapa is untouchable, unfortunately. Even top ranking cops fear him. They don’t know how he acquired armed state security. But I hope you find justice some day. https://t.co/m50fBQ9UNT

A day after he allegedly knocked Ben, the socialite posted on his social media platform saying “What has kept me successful for all of this time is because I usually see some things as barking dogs, If you spend time beating them, you end up caught by time. Therefore, if you also want to be successful in life, let the barking dogs bark.”

Social media has since been awash with complaints from members of the public asking for security intervention into Sipapa’s behaviour.

So there’s this car that keeps driving recklessly, no number plates and is escorted by officers in uniform.
Allegedly it belongs to the famous SIPAPA.
Recently at Kiira Rd lights, the car was driving in the wrong lane, almost knocked a Rav 4 that was driving in the right lane. pic.twitter.com/K5TMRyb5SH

On Thursday, AIPG Asan Kasingye, the police Chief Political Commissar tweeted that one of Sipapa’s vehicles had been impounded.

However, this is not the first time, Sipapa, who some Ugandans believe is untouchable, even by police, is being dragged into the controversy.

In September 2020, two men moving with Sipapa in the same vehicle are said to have opened fire when a group of People Power supporters confronted them shortly after parking in front of the premises of Fred Nyanzi, the elder brother of Robert Kyagulanyi alias Bobi Wine, then a presidential aspirant and principal of the National Unity Platform (NUP).

Sipapa was driving a Super Custom vehicle registration number, UBE 229E and the youth allegedly broke his windscreen, prompting two men who were driving with him to fire in the air and at the shops.
One Muzafaru Nyombi, who sustained a broken leg and wounded eye in the incident, said the same group returned at night and pounced on him as he was planning to return home. They reportedly accused him of being one of the people who attacked Sipapa during the day.
The Kampala Metropolitan Police spokesperson, Patrick Onyango then said Sipapa was summoned for questioning.

“This is not the first time Sipapa has attacked NUP offices in Kamwokya. His first attack was on August 30 and the recent one of September 15,” Onyango told journalists then.
Sipapa was never arrested nor prosecuted in court.

In 2018, the socialite was accused by his then girlfriend, Brown Shugar, of assault and domestic violence.
She dragged him to police but the case ended prematurely as he was never arrested or prosecuted in court.

In what some people have claimed to be public PR to cover up his transgressions, Sipapa, early this year became the talk of entertainment media when he jumped in to help 19-year-old Fiona Rukundo and her family following a car accident she was involved in.
Rukundo and three others were on December 30, 2021 knocked by a speeding army car (H4DF 2490- Toyota Land Cruiser) attached to State House in Gomba. She sustained several injuries including losing an arm. However, one of the victims of the accident died.