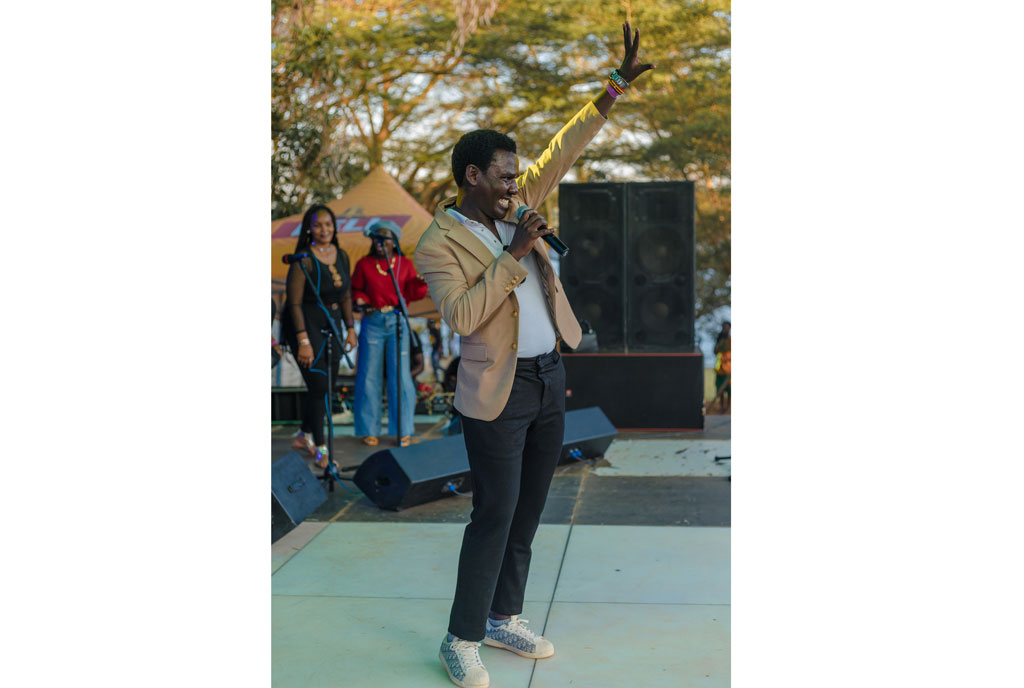 When the lockdown on the creative economy was lifted at the end of January, the fear was that the public wasn’t ready to go back out there, especially buying tickets to support artists, not in the mainstream.

Yet, a few days into February, soul artist Kenneth Mugabi announced that he was hosting a Valentine’s Day show at the National Theatre. By this time, he had already been scheduled to perform on March 7 at Alliance Francaise Kampala’s performance space on Bukoto Street.

The first show at the National Theatre was the first event at the venue that had gone through a two-year lockdown without creating an elaborate plan of reopening.

Either way the show happened on Valentines’ Day, it was Mugabi’s first show since he released his People of the Land album at the beginning of the year. But the album had initially arrived at the end of 2021 – then they had printed limited copies they sold at $100 (more than Shs360,000).

Only a single, Wamanyiza had been released from the album prior to the album’s January release and in a short time, it was getting traction thanks to newer ways people promote music such as TikTok.

Kenneth Mugabi’s People of the Land is one that has so much to offer but, of course, it makes you a listener, questions a number of things about the artist, his journey, music, and what happens next. Especially if you have followed him from the time he auditioned for Coca-Cola Rated Next.

Mugabi has in the past released two acclaimed albums, Kibunomu, his debut project, and Ugandan. The two albums were rolled out in more independent yet organised ways, for instance, he pushed Ugandan with an intimate concert he organised with the help of Fezah, the show sold out even when Chronixx was in town the same evening.

Kibunomu had been released in a similar manner back in 2016, it was during the Qwela Junction, Crooners edition that Joe Kahiri, one of the founders of Qwela Band announced that Kenneth Mugabi’s album had dropped.

These had been minutes after the man had announced his presence with two performances, Kibunomu and Naki and as they say, the rest is history.

People of the Land was however handled differently, the artist had just signed to Black Market, one of the biggest music labels we have at the moment. Thus they were meticulous about the rollout. They were deliberate about where and how they were releasing the music that it wasn’t surprising, that almost two months after its release, the album remains in the Apple Music Top 20 most listened to in Uganda.

The show at the National Theatre started at about 7:30, without wasting time, Sandra Suubi showed up and opened for her friend, the two have a journey that is not very different, they were both once in a talent search, though much as Sandra won hers, Kenneth fell too short.

They also have a song together, Njibwa which appears on Suubi’s latest EP.

For years, Mugabi has mastered the art of crafting love messages that have won him a big female fanbase. Thus, for most of the time during both concerts at Alliance Francaise and the National Theatre, these women were turned into a choir singing to each and every material the artist has ever released.

The new album, unlike the first two, is bigger both in volume with more than 20 songs and also heavy on social commentary. The artiste ventures into such messages such as domestic violence on all sides, for instance, we see it through the eyes of a child and then a man and a woman.

Ankuba, featuring Halima Namakula carries the responsibility of breaking down domestic violence in situations it is dished by the woman. In the song, Halima is the mother to Kenneth’s character who is consulting with the mother about the wife’s violent nature.

Like it is in real life, the song doesn’t seem to be comfortable with giving a conclusion on whether the man should defend himself against the wife thus leaving us in the expected balance.

But then there is Muvubuka, the song that seems to talk to the youth of this regime, one that has all hope and yet still has to live and toil for a young family they have started.

Muvubuka cautions young people against sleeping around and dividing themselves over green and solvable problems.

Most of these songs have not had an official release, yet through the two days of the concerts, you could see a fan base that has not only grown to love the artist for releasing songs as catchy as Naki or Sanyu, but one who they appreciate for his craft.

His audience has grown not only to love his work but also recognise it by keys, they would scream when he played the guitar in a certain way, when he held a tube fiddle or when he walked towards a grand piano at the National Theatre.

A girl somewhere said he was going to do Embera, a song from his Ugandan album that indeed has a heavy presence of the grand piano. That relationship with the audience is not something many mainstream artists enjoy.

Of course, like all these shows, it ends with people singing and dancing to Naki and making demands for some songs they think have been left out – just like that Kenneth had wrapped two successful shows that should be a lesson.

For instance, after easily conquering the National Theatre twice, he should be bracing himself for bigger spaces or he will become another missed opportunity. After two impromptus sold-out shows, maybe it is that time that Mugabi completes the book that Maurice Kirya started, taking strings and soul to the paying mainstream audience.