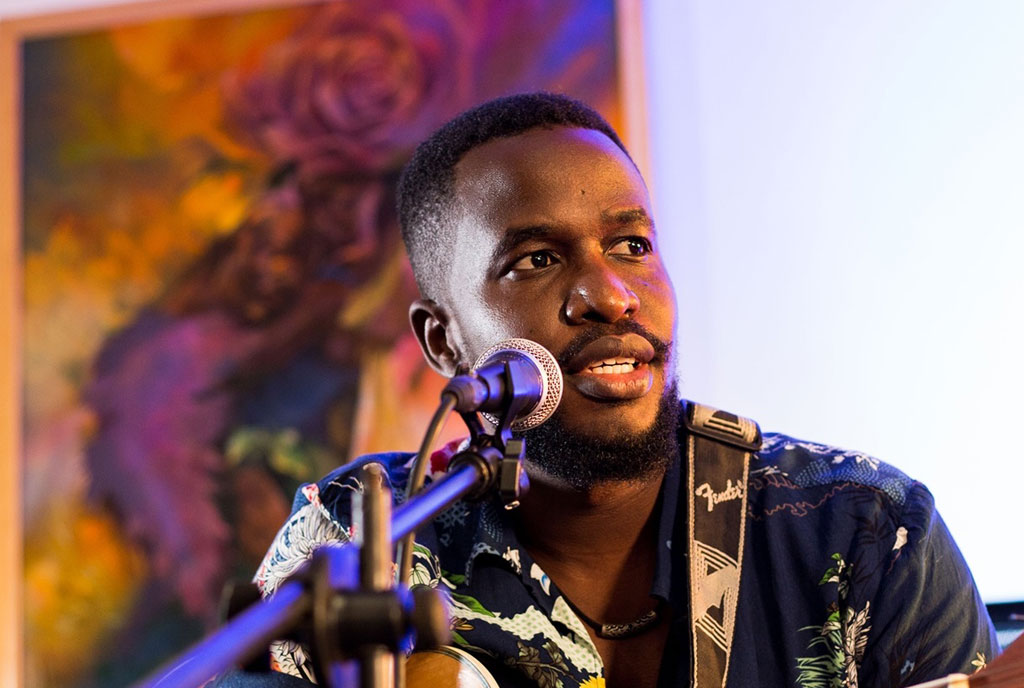 Slow: Ugandan singer-songwriter, guitarist and music producer J.C. Muyonjo has performed at festivals like the Bayimba International Festival of the Arts, Blankets and Wines, and DOADOA, among others. PHOTO/ BAMUTURAKI MUSINGUZI

The Ugandan singer-songwriter, guitarist and music producer J.C. Muyonjo has released his fourth album Afrosphere that explores different afro-pop rhythms merged with rich melodies that draw inspiration from genres like RnB and hip-hop. The seven tracks on the album sang in English, Luganda, Rutooro, Runyankore, and Swahili are: Moyo Wangu, Kankusubize, Akalango, Olugendo, Out of My Way, Embabazi zawe, and Katitira. He talked to Bamuturaki Musinguzi. Excerpts:

Muyonjo, who began his music career in 2012, has three other albums “If We Try,” “Kidandali EP,” and “Alkebulan EP” under his belt. He sings in English, Rutooro and Luganda.

He has performed at festivals like the Bayimba International Festival of the Arts, Blankets and Wines, and DOADOA, among others.

He has shared the stage and worked with musicians like Maurice Kirya, Ruyonga, ThaMith and Sandra Nankoma, Lillian Mbabazi, The Body of Brian and AbassaR. Born in 1990, Muyonjo attended Lohanda Academy, Kings Way Primary School, St Joseph’s Naggalama, and Ntare School. He holds a BA in Industrial Fine Art from Kyambogo University.

Why did you name you fourth album “Afrosphere”? What is “Afrosphere”?
Afro is from “being Afro centric” and Sphere from “Atmosphere.” I took elements from Afro pop, beats and rhythms currently influencing the soundscape which I fused with genres which I first fell in love with, mainly being RnB and hip-hop.

Why did you decide to have it as a collaborative album?
Afrosphere was a challenge taken on after my previous releases so the intention was one of growth because of new demands which required working outside my comfort zones stretching from curating, composing, producing, writing to project management.
There were some moments that scaled from excitement to pure frustration. I thought of this project in late 2018 and began while I was working on my previous E.P.

What is the importance of collaboration in the music industry?
Collaboration is a major growth factor and I believe none of us is smarter than all of us so with that approach I knew we would all leave with a certain experience as a writer, instrumentalist, producer and singer.
Secondly, creating ecosystems is important for our survival especially for an industry that seems structure less. This album was able to reach 9 different fan bases and every artist was new to each of the others.

Why does rap feature on nearly all the songs?
The album has a lot of rap because I wanted strong lyrical and storytelling elements and rap lends itself to this a lot. Secondly, I have a background in the genre and was heavily influenced by it while growing up.

Why does this album mainly focus on intimate love?
Love, I think it is the strongest dopamine inducer and hence the most relatable. “Moyo Wangu” is the start of the journey while “Kankusubize” is where you affirm your commitment to it. However, the sublime message is that the whole album is my journey as a Ugandan artiste and my commitment to music (my love). The interludes tie that in well because they eventually give context once I explain that part.

What attracted you to music?
My late dad Mr. Muhenda Fred was a huge music lover so all the Lingala he played in the house attracted me to melody when I was really young. My uncle David introduced me to hip-hop which made me pay attention to writing and lyrics. I eventually gravitated towards RnB and other genres by myself.

How would you describe the type of music you play? What messages does you music convey?
My music is about different aspects of life and not tailored to specific themes so I have made music about love, faith, politics and social issues. I think people need theme songs in life depending on what they are going through and we the musicians are meant to provide this.

How do you combine fine art and music?
This is a very interesting question given that I am trying to find a way of presenting both aspects of my creative journey through audio visual productions without separating them. Currently, I practice them separately and it does drain at times because it feels like having two different careers.

How has Covid-19 affected you as an artist?
Covid-19 put a halt on performances which was a huge challenge given many of us lost revenue streams and it also felt like losing a limb. However, we learn to adapt and find a way of creating through it all as well.

How fast do you see the cultural and creative industries picking up in Uganda, now that the economy is being fully opened after the lockdowns?
I think we will pick up quickly given Ugandans love entertainment and return to where we left off. However, there a certain underlying issues at the institutional level that will stay the same if no one is intentional about fixing them and we would end up right back in a ditch if something similar to Covid-19 hit us again in the future.

How best would you describe the state of the music industry in Uganda?
It needs structure, organization and more skilled technocrats from different professions to help it grow to a respectable level. In comparison to others on the continent like South Africa or West Africa which have benefited massively from theirs, we aren’t doing very well. The assumption many have is that talented musicians are the key aspect to making it thrive and forget the role capital investment, the media and government policies could play- By Bamuturaki Musinguzi | mbamuturaki@ug.nationmedia.com