Questions, no answers: By now we all know that the just-concluded awards were not devoid of drama. From the organisers, the awarding criteria, the guest list to artistes exchanging blows, Andrew Kaggwa reviews it all. 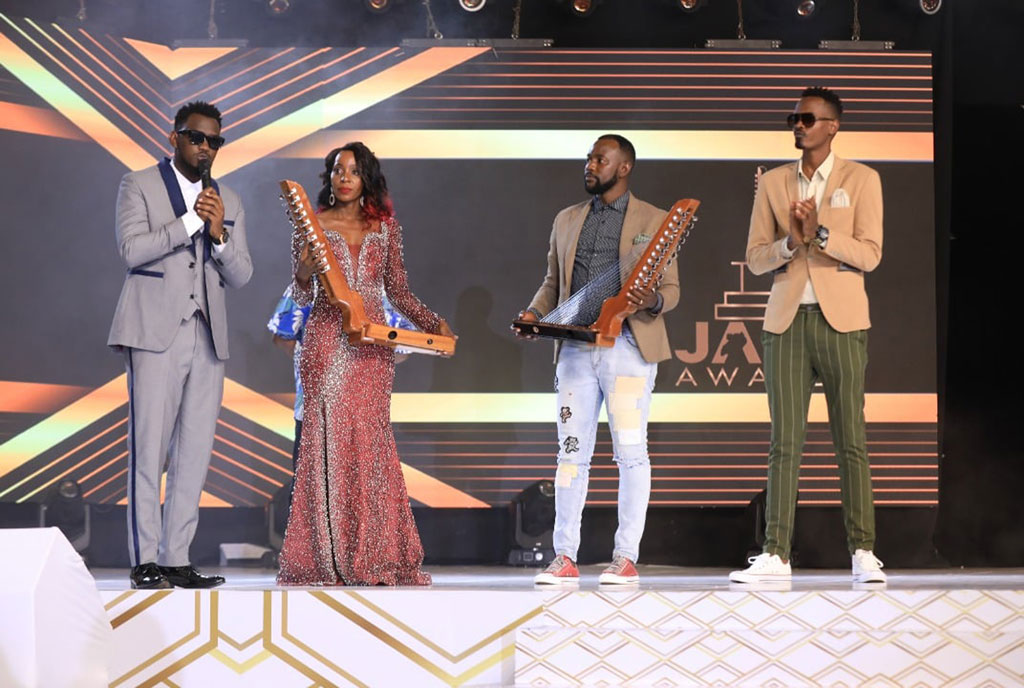 Inconsistent. There were questions why some of the winners got a janzi award while others received cash prizes.
PHOTOS /COURTESY

Whose money was it?

Who are the winners and losers?

It is so hard to start a story on the Janzi Awards without asking yourself all these questions and more.

If you need to be taken around here, the Janzi Awards were an establishment (for lack of a better word) that were set up by a number of people to recognise the local art industry. The art industry is what they sold to us but the truth is the awards were celebrating the music industry with other people as honourable witnesses.

Janzi Awards, inspired by Janzi, a stringed instrument designed by James Ssewakiryanga, also the founder of Janzi Band, were intended to celebrate Ugandan arts such as Literature, audio visual art, tech and of course, music.

The awards were big in all meanings of the word big; they were big on funding, big on categories, probably the first to beat a record the Grammys have always held with more than 80 categories. The gong, well it was also very big.

For an idea that had been born on a cold day in Gulu, what did you expect? They went big on everything, got Kololo Independence Grounds for a venue, and went on to hijack airwaves of one TV in the red and another one we all thought was in a morgue, to simply launch.

See, these awards launched twice; the first time they were announcing their presence and asking the public to nominate people in different categories. Then they had a second launch where they announced nominees.

As you could imagine, the two situations were glamorous, and live.

But to break down the events as they happened over the weekend, we need to ask and answer all the questions we started this conversation with. For instance, Is Covid-19 still a thing? 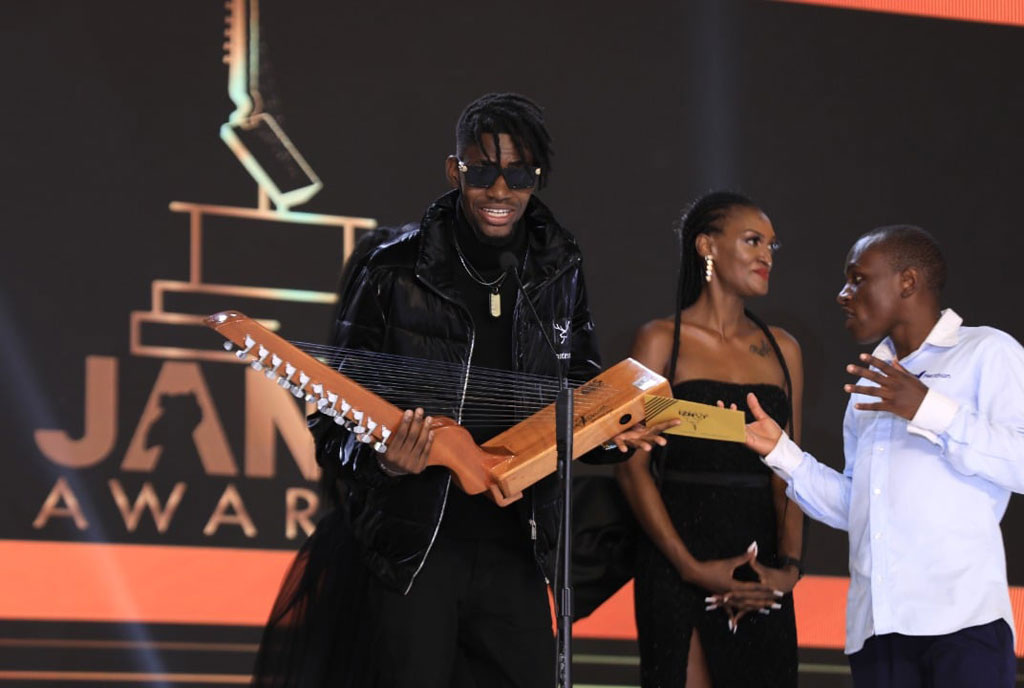 If there is an industry that has failed to recover from the Covid-19 scourge, it is definitely the creative economy.

Not because the industry is too fragile, but because it has been closed since March 17, 2020. Much as different industries have been partially opened, the creative economy has remained closed. Cinemas opened in September, but less than a year later in June, they were closed in the wake of the high spread of the lethal Delta Covid-19 variant to date.

So, what does Covid-19 have to do with the Janzi Awards?

Well, the awards were not scientific, they attracted both public figures in government and in the creative economy. Yes, these awards gathered people at the Kololo Independence Grounds to drink, eat and celebrate everything art at a time Ugandans are not allowed to convene to do the same thing.

For instance, at the entrance, the people manning the gate seemed more interested in the safety of the guests (which is a good thing), than their health.

As I walked into the venue, my temperature was never measured and neither was I presented with a point to sanitise before going on. The situation was worse inside the venue, most of the people were not wearing masks but that wasn’t the biggest deal – this was an event that brought together at least 200 industry people.

Some of these people were dancing and singing to the music that was being performed, who knows they may have spat at each other.

Was Covid-19 on a break for the awards to happen without a glitch?

Is Covid-19 still a Ugandan problem?

All these questions kept coming up, especially from a few artistes attending the fete. It is not surprising, that singer Diana Hajara Namukwaya, alias Spice Diana, questioned why the award show flawlessly happened in the manner artistes will be arrested for.

So, whose money was this?

There is a first time for everything.

That must have been the mentality with which organisers of the Janzi Awards dived into the whole saga. They were dedicated to celebrating the arts industry but somehow failed to articulate why there was a need for a celebration.

But it was even harder for many involved to tell who exactly was behind the gala. Yes, there was the Uganda National Cultural Centre (National Theatre), Uganda Culture Forum, Uganda Musicians Association, Uganda Registration Services Bureau, Ministry of Tourism, Ministry of Gender and the ambiguous Operation Wealth Creation, among others. But who was calling the shots?

For a big part of the event, fashion collector Sylvia Owori seemed to do much of the talking. Her presence was recognised and you could feel the power she wields. Did you notice how she affirmatively noted that Mona Faces deserved the Best Makeup Artiste award and added, “Mona has been doing my makeup for years.”

Mind you that award was meant for a makeup artist whose specialty was special effects – the one for film, theatre performances and themes, but anyway…

Owori is the director of operations at Operation Wealth Creation. According to their website, the Operation Wealth Creation was launched by President Museveni in 2013 as an intervention to efficiently facilitate national socio-economic transformation, with a focus on raising household incomes and wealth creation by transforming subsistence farmers into commercial farmers to end poverty.

Operation Wealth Creation’s specific objectives as of Tuesday December 14, 2021, according to their website, was to mobilise the masses to engage in commercial agricultural activities to boost household incomes, to distribute production inputs equitably and timely, to boost production and productivity at household level, and to facilitate rural technological upgrading so as to allow smallholder farmers to transform themselves into small-scale industrialists, among others.

How this tied into celebrating arts and culture is confusing. Plus, Operation Wealth Creation being an institution, Salim Saleh’s name being dropped each and every time was confusing.

Salim Saleh is President Museveni’s brother and also the chief coordinator of Operation Wealth Creation, the institution. His name was mentioned in both praises and fights at the award gala.

Apparently, in the heat of the lockdown, a number of artistes had turned to Gulu and formed associations into a career bend. Kiwewa was one of these people.

The veteran alongside others are said to have formed an organisation representing Kadongo Kamu artistes. It is said they received a good sum of money but the artistes it was meant for never received even a coin.

During the onstage scuffle, one of them constantly mentioned Salim Saleh’s name and money.

Which leaves one wondering about Operation Wealth Creation and its music marriage. Does the marriage even exist? Did they fund the awards or Salim Saleh did this himself.

Yet besides the ambiguity of the awards, the show had to happen, people had to pick accolades, as in, someone had to win and others had to lose.

If there was a moment where the real good, bad and ugly of this fete took place, it was the awarding.

The award show was seemingly doomed from the day they were launched – not that people did not want the awards, the timing was wrong. Better said as a mockery of an industry that had been closed for nearly two years.

What was there to celebrate of an industry where stars had fast become beggars or switched careers!

But nevertheless, the awards went on, the first problem was the nomination process – they asked the public to nominate the over 90 contenders in the different categories.

Then came the nominations, they gave the audience less than two weeks to vote for the winners on platforms such as Whatsapp, Twitter and the Janzi Awards website.

Did they have an accountancy firm to oversee the counting of votes that were coming from these various platforms?

The awards took place a few days after voting closed. In their defence, the Janzi Awards committee noted that they had an academy whose decision counted most.

The biggest problem was the winners submitted by the academy, how did they arrive at these specific winners? What was the criteria? – For instance, The Girl in the Yellow Jumper is slated for a Netflix release on December 26. Much as the film directed by Loukman Ali may be the best film to come out of Uganda in 2021, by the time of the Janzi voting and as you read this, the film is yet to be seen by the public.

It leaves one wondering how the Janzi academy zeroed down on a film they have never watched as a winner or how it got nominated in the first place. 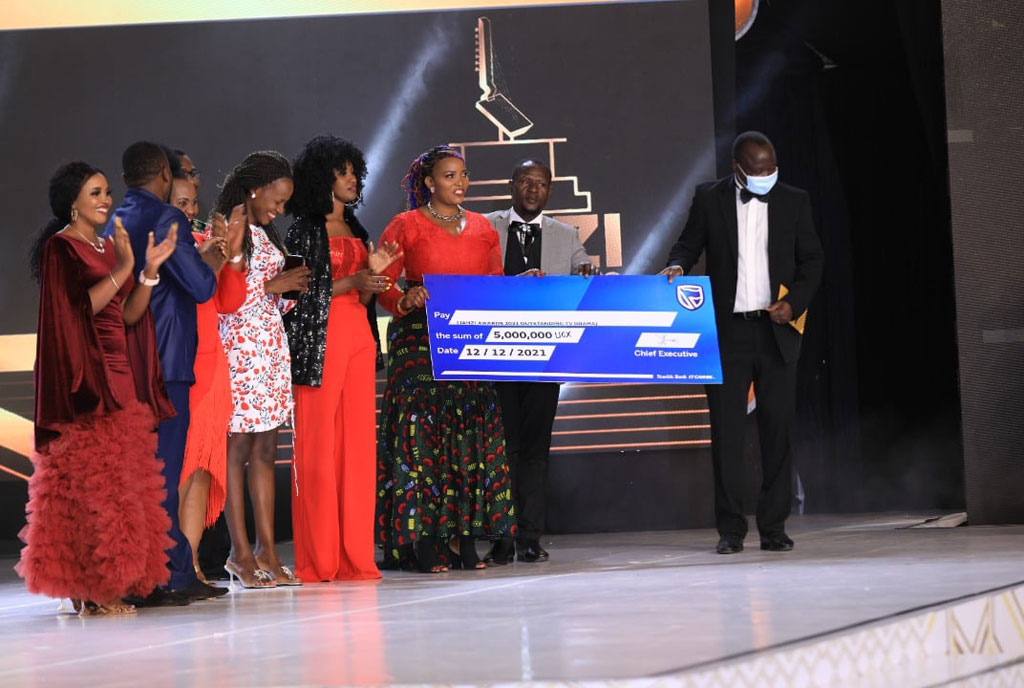 Why some awards came with a cash prize and others were just a fu rnished Janzi!

Things got more complicated with more winners, take an example of two awards that were won by one of the show sponsors, association members, leaders, friends of the organisers and the Best Live Band accolade that was won by Janzi Band, they are good but the band was founded by the inventor of the Janzi.

Then there were scandals where nominees did not get notifications of being nominated and others were never invited for the actual show.

Apparently the organisers were only inviting people they knew were going to win. Cindy even abandoned her honeymoon to pick up the Best Dancehall Artiste of 2021 for her 2019 single Boom Party.

But the biggest question throughout the show was, besides winning a fully-tuned Janzi instrument, how are artistes who were neither nominated nor won, benefitting from the Janzi Awards?

Outside everything that happened though, it is good to note that the awards producers Fenon did a commendable job. For the biggest part of the two days, they seemed like the biggest winners, until they failed to manage that blackout.

Sewakiryanga was the other big winner. After years of trying to promote his instrument, he finally has more than 90 of them in different homes. Is that enough for an instrument as monumental, or the industry at large? Definitely not.