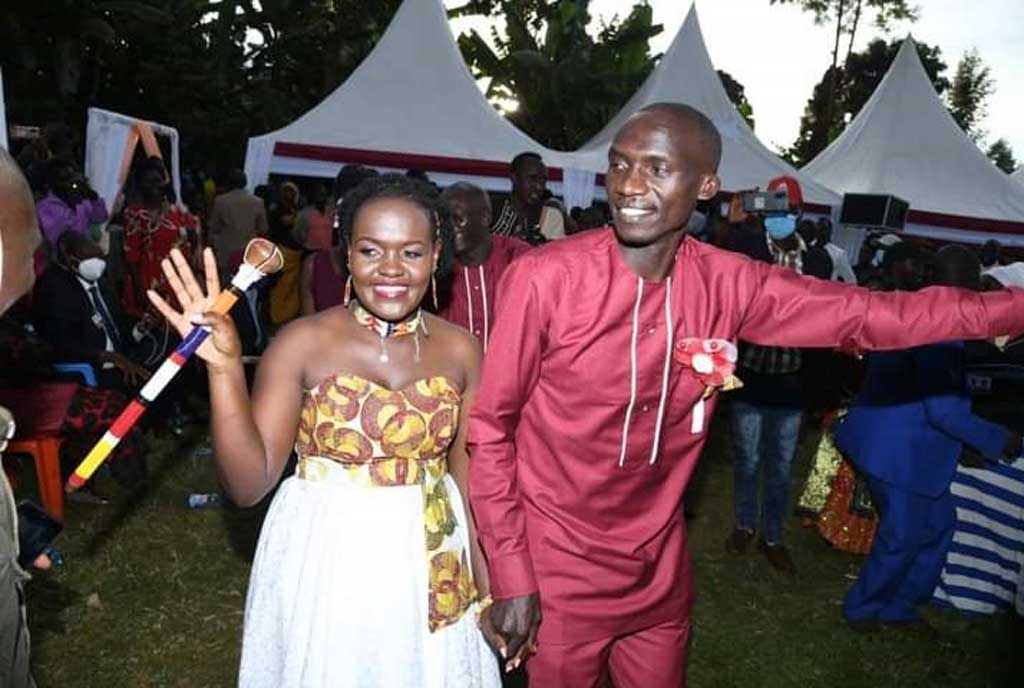 The social hangouts had been waxing lyrical, the churches had been singing praises. Every corner of Sebei Sub-region had for the past two months been talking about the introduction ceremony.

October 30 had been on everyone’s lips. The day had finally arrived and at about noon, Kapchorwa Municipality was jolted into activity. Police patrol pick-up vehicles, private cars, taxis, buses, trucks all queued up heading to Cheminy Sub-county, Kween District, about 20 kilometres away.

At exactly 1pm, a convoy of more than 50 vehicles snaked through the streets.
It was time to leave Cheboron, the village that raised Carol Yeko of Kamari clan. The locals had been anxious to see the man who ran away with the heart of one of their finest girls.

Joshua Cheptegei, the world and Olympic champion, in company of youngster Jacob Kiplimo and veteran superstar Stephen Kiprotich and a few lads, had done their bit. Looking dapper, they joined the convoy waiting in Siron, the gateway to the Kapchorwa-Suam road.
As soon as they started driving in town, onlookers crowded the road, jostling to catch a sight of the star groom.

Cheptegei, clad in a maroon outfit, emerged from the sunroof of Peruth Chemutai’s navy blue ride, gifted to her by President Museveni for the Olympics exploits in August.
He waved and acknowledged greetings with a bow to wild cheers from the crowds. He then retreated to the car and the convoy drove away.

The journey to Carol’s home was now in full throttle.
Unlike the brave man, who outpaced the world’s who-is-who in marathon with a spirit of the wild, the Cheptegei of Saturday was a tame man mollified by the melting love of Ms Yeko. He grinned to no particular humour.

As the vehicles hurtled down the slopes, Cheptegei’s heart pounded with vigour as it did when he took the last lap to sprint past other competitors to the finish line.
Indeed, he was hooked onto the penultimate phase to take Ms Yeko for keeps and, unlike the Olympics, he had already elbowed out other suitors.

Thus, he could afford to summon fellow star athletes from Kenya; Geoffrey Kamworor and Bridget Kosgey, among others.
The team from Kasumbata clan, where Cheptegei belongs, led by chairman Joseph Musobo, aka Waya, arrived in Cheminy with pomp. They strutted into the VIP marquees before 2pm with distinctive gait, unbothered by the searing afternoon temperatures.

The event’s chief guest was Vision Group CEO and Managing Director Don Wanyama.
The journey to this day had been long and winding. It involved darting surreptitious glances at each other when the chemistry of love began manifesting between the two lovers.

Then the secret and public shenanigans followed. After years together, Cheptegei took the big and bold step to traditionally marry Carol, an announcement the groom first made at Shinning Light of Gods Ministries church.
Saturday’s colourful ceremony attracted political leaders, religious leaders, cultural leaders, officials from Uganda Athletics Union, among others.

The bride is a daughter of former government engineer Stephen Sikuku, now deceased, and Jessica Chesakit of Cheboron Village, Kaptum Sub-county in Kween.
Cheptegei and Yeko, now the chief executive of her late father’s construction company, Afro Construction 2000, which she inherited, met in a church in 2014 and together they have two children.

Advice to the couple
Mr Wanyama tasked the couple to always exercise patience and love in their marriage.
Mr Geoffrey Kamworor, a celebrated Kenyan long distance runner, who led the Kenyan groups of international stars at the introduction, said they came to support Cheptegei as a brother.

“I inspired Cheptegei when he came to Kenya when he was kick-starting his career. We become friends and graduated into brothers. He is now my inspiration. He has achieved so much at his young age. Kenyan and Ugandan athletes, we are like brothers,” he said.
Mr Peter Chelangat, a coach and Uganda Athletics Federation official, congratulated Cheptegei upon making a bold decision.

Mr Stephen Kiprotich, an Olympic marathon champion, said marriage will help Cheptegei focus.
Cheptegei said his wife is the reason behind his success. “She is, and she was, the woman of my dreams. She has supported me to achieve my dreams and become what I am today,” he said.

Ms Yeko said she feels privileged to be married to him. “Apart from Cheptegei being a loving husband, he cares and works hard for the welfare of the entire community he lives in. What pleases me more is the fact that he is positively changing many lives through his work as an athlete in Sebei Sub-region and the country at large,” she added.