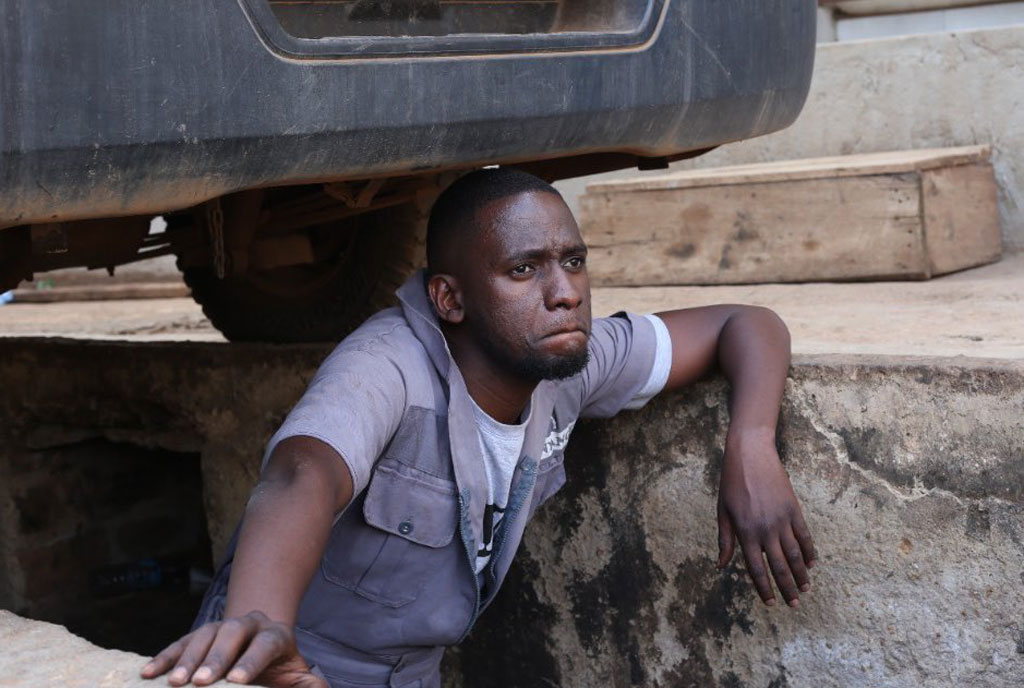 Moses Kiboneka, also known as Uncle Mo, says comedy came as an alternative when work at his garage had come to a standstill due to the disruptions caused by Covid-19 last year. Little did he know that five months later he would be a comedy sensation in Uganda.

He said that the lockdown left him idle as customers were not bringing their cars for repair.

Uncle Mo had already written a number of scripts for his comedy skits. After reading them, a friend offered to help shoot his skits.

You may have come across a skit of a mechanic dressed in faded grey overalls, making light of Uganda’s serious and at times painful developments or news events, sometimes under a car or leaning against one in a garage.

Uncle Mo’s skits cover Uganda and beyond. Some of his fans call him Uganda’s Trevor Noah. His earliest influence was American comedian and TV host Jay Leno, as well as Jon Stewart formerly of The Daily Show.

“Jay Leno could talk about things that were happening, but come up with a fresh comedic light through which he could present the reality. He is my earliest influence,” he said.

One of his most popular segments is Museveni’s New Cabinet: The tale of the fishermen, in which he talks about Ugandan President Yoweri Museveni’s recent appointments.

He starts the segment by throwing a jab at the media’s exaggerations for saying that Cabinet positions shot up from 79 to 80. He then introduces the newly added ministry number 80 —the Ministry of the elderly.

“I don’t know if it’s just me, but I think the elderly are already well represented in the Ugandan Cabinet. They didn’t need a special Minister,” Uncle Mo says.

Kiboneka’s comedy covers political, social, cultural and economic consciousness. He satirises events that are of public interest, for instance the recent law passed by a Kenyan judge that made being a housewife a salaried position. He says, “Housewives in Kenya are now going to have a chance of using fancy statements like, ‘I have to clear my to do list before close of business’, ‘my boss is driving me nuts’, ‘I didn’t get a company T-shirt’, ‘I am in between jobs’.”

Uncle Mo says that he came onto the scene at a time when people across art forms were using life hacks, cooking videos, dancing videos and churning out all manner of content in order to trend.

“Because I was going to start from scratch, I had to get something that was unique. It was risky though.

“I also wanted to make comedy skits that have an international reach, talking about things that are broadly relatable to people beyond Uganda,” he said.

Kiboneka’s comedy journey is unintended; he says he had planned to shoot his segments in a setting similar to The Daily Show in the US. He had even identified a friend’s office, which he considered fancy enough for the shoot. But on the day of filming, his friend changed his mind and told him to “go and do your shootings in your garages”

And right then Kiboneka decided to shoot his skits in his garage dressed in his overalls. That is how “the makanika from Kireka” was born.

Kiboneka works as a mechanic in real life, in the garage he shoots from. He has two degrees, done simultaneously — mechanical engineering at Kyambogo University and a Bachelors of Science in maths, economics and statistics from Makerere University.

After school he went to work at Enyange garage in Kireka, where he has been for the past 10 years.

Kiboneka’s talent only came to recognition in July 2020 through the skits he posts on his YouTube channel I am Uncle Mo, although he had been writing comedic skits and plays for many years.

“A few months in, I thought of quitting. I was not seeing enough traction. Then I made one video and it generated many views.

Less than a year after starting, the comedian boasts more than 17,000 subscribers on his YouTube channel and many views.

He started earning from YouTube in December last year.

He has also started promoting brands, which has come as another revenue stream on top of earning from YouTube.

The Ugandan society, politics, culture and personalities are fodder for comedy, to deal with the country’s ugly politics, youth disillusionment and other social-economic ills, young people have taken to comedy to be able to deal with their unpleasant realities.

Corruption, moral decay, elections, poverty, breakdown in public services, tribalism, nepotism are among the common subjects tackled in most of Uganda’s comedy content.

Kiboneka delights in the fact that through his comedic light he is able to make people laugh by talking about the very tough realities they live through every day.