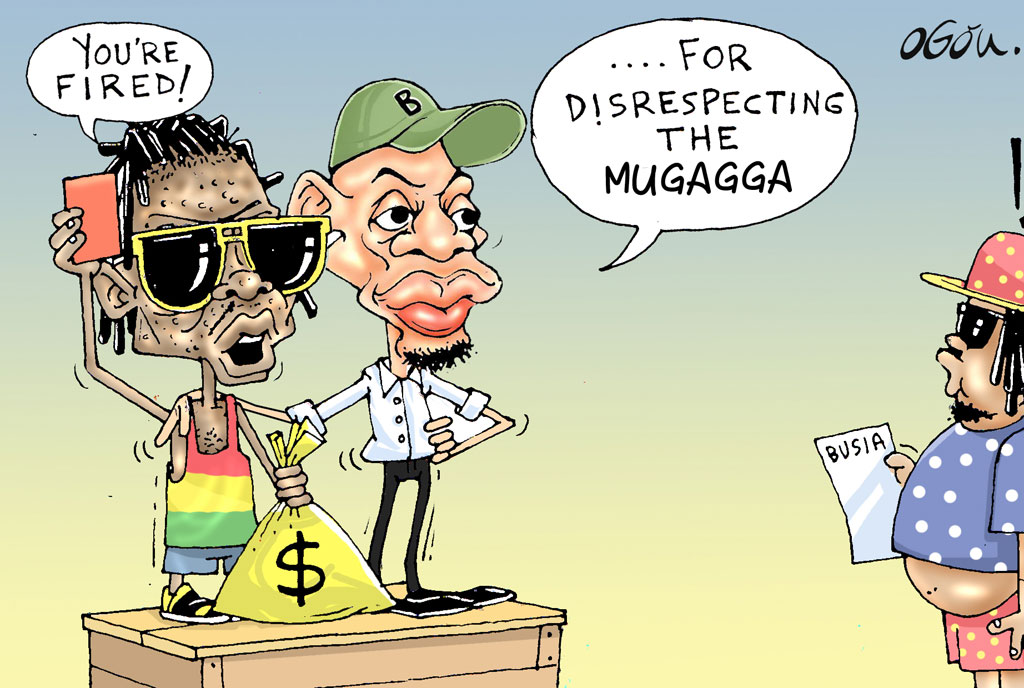 When it comes to money in Kampala, we bargain in Luganda.

Typical: The worst mistake is to pledge at a Ugandan wedding. Never fall for the trap of pledging. Clap, put money in the chairperson’s safe, but never commit any amount.

Kampala City is not for the faint-hearted, it’s not for the strongest, but for the swiftest, and the smoothest. It belongs to those few who understand and keep its laws. If you’re not a good practitioner of these laws, Kampala will bury you alive. Consider this a survival tactic, for the first time, the laws of money are being unveiled. The mystery has now been revealed! So let’s delve into the laws.

Anyone calling you boss is about to take your money

In Kampala, we give titles for a reason. And if you respond to a title, you must expect that you will soon pay for that title. If a vendor refers to you as ‘Boss’, rest assured you are going to pay double. If your friends address you as; “Manager, Mugaga, CEO, Investor”, prepare to foot the bill. Even in Kampala relationships, if she addresses you as ‘sweetheart’, she’s about to drop a gigantic request.

If you are going downtown, smartness is a disservice

Downtown, you are not expected to dress smartly. If you are planning to bargain for anything in Kampala, cut down on your smartness. Pick up some of your tattered and shabby clothes and slope to those downtown shops. You will get the best of prices.

In Kampala, we bargain in Luganda not English

When it comes to money in Kampala, we bargain in Luganda. If you risk and bargain in English, be certain you’re paying above and beyond the normal prices. Luganda is the language of harmony. It tells the other party that he or she shouldn’t expect to cheat you. It shows you’ve been in Kampala long enough. A bodaboda will charge an English speaker twice as much as it would a Luganda speaker.

Transport money is a game of power

When it comes to relational power in Uganda, transport money is everything. To send before or after is the big question. If he sends transport money, he transfers power to her. The moment you send transport money prior to her arrival, expect to deal with excuses. That’s when her phone gets lost, or some emergency pops up. Most men have died of heart attacks simply because they gave out their power by sending transport money in advance. But then ladies also realise if he hasn’t sent transport money, perhaps he’s not as desperate or in love. If you want to know someone’s personality, simply ask them about transport money.

Assume that the first price is wrong

Whenever you are buying anything in Kampala, never accept the first price. Assume that you are being scammed. Immediately walk away. If they do not call you back, chances are high that’s the right price. If they do call you back, be certain the price was doubled. In Kampala, bargaining is a psychological game. You can even pull out your last note and act like that’s all you have, he can take it or leave it.

Kampala traffic officers were the inventors of the language of bribes. They came up with creative ways to ask for money without appearing to do so. The practice soon moved to public offices and now it’s everywhere. When a Kampala person says; “Yogera oluganda, vaayo gyoli, tekaamu amafuta, olina amawulire, wasomye etc” be certain he’s checking your current standing as regards payment of the bribe. Sometimes they will call it facilitation or the scissor or the cement. There are a million ways to solicit for a bribe in Uganda. Everything in Uganda is indirect. You can’t accuse anyone of soliciting for a bribe. The man will claim he was genuinely asking for some drinking water. How is drinking water connected to money? The police officer will ask you to help him with the daily newspaper. Again, how is the daily newspaper connected to money? In Kampala, you must listen carefully and know the true meaning of every statement. It’s all about the interpretation. In Uganda, money is about proverbs.

Pledges are a trap

The worst mistake is  to pledge at a Ugandan wedding. Never fall for the trap of pledging. Clap, put money in the chairperson’s safe, but never commit any amount. On the other side of the coin, never believe in a pledge until it’s honoured. Ugandans are the kings of making monetary promises. If a Ugandan is in public, they will promise life and death. At wedding meetings, they will promise millions. At graduations, uncles will ask people to drop their CVs so they can do something. There’s nothing that Uncle is going to do! At funerals, relatives will promise orphans heaven on earth. “If you ever need anything, we are here for you. You won’t suffer. Your father was our good friend.” Never believe the words of a Kampala person when it comes to money. In Kampala, words only count with money in hand. Other businesses will promise entrepreneurs; “deliver this for free, we are giving you a bigger deal.” Like some ka money that never comes, so it is with pledges in Kampala.

Next week let’s move to Salaama road, just to warn the residents…