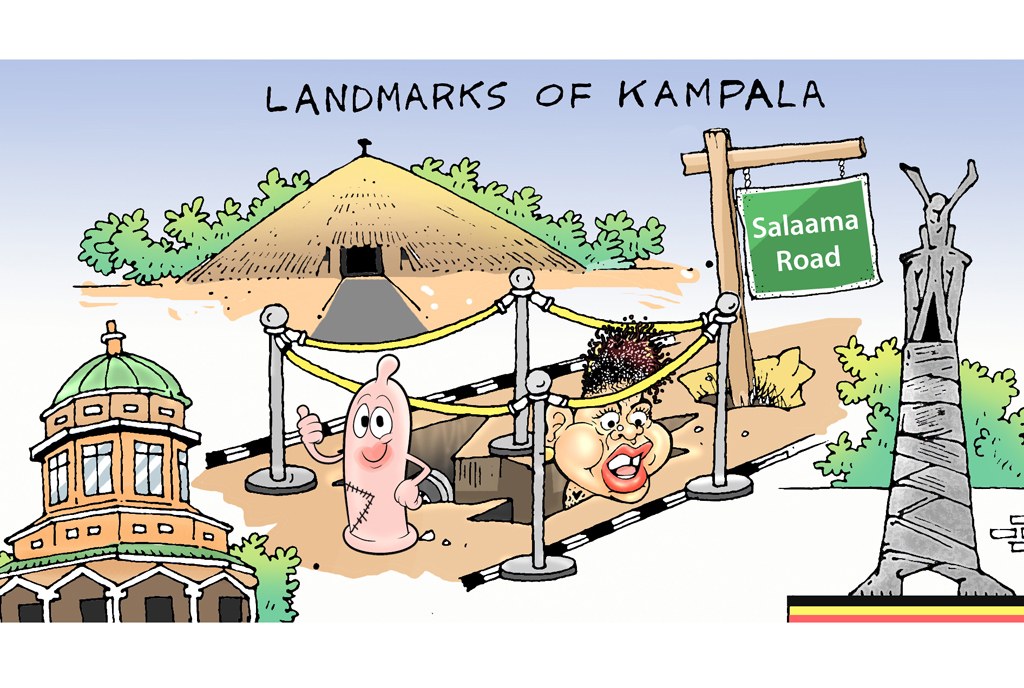 Typical: If Najeera is the home of chaos, Salaama road takes the award; ‘home of massage parlours.’ Everything in Salaama road rotates around a spa, a massage, or a guest house.

I have always thought Salaama Road is Heaven. After all, with the proximity to Munyonyo, it’s easier to assume Salaama road has achieved some benefits through affinity. But that’s a lie! I was disillusioned. This piece is a mere orientation of the facts on ground.

The Salaama Road
How on earth do people wake up everyday to inflict themselves to this kind of torture? On the Salaama road, you just don’t have potholes, potholes have you. You simply choose which kind of pothole to take on, but you can’t avoid the potholes. You make a choice based on the shape or size of the pothole. If it’s to go by pothole per capita, the people of Salaama road would be the richest in the world.

As we struggled with the Dubai Expo, Salaama road would have represented us better; “the pothole suburb of the road.” But it’s not just about the potholes, there’s more to Salaama, the offshoot roads are worse. If you love your car, you don’t risk it on Salaama road. If a friend invites you to pay them a visit, do yourself a favour, jump on a bodaboda.

The Businesses
If Najeera is the home of chaos, Salaama road takes the award; ‘home of massage parlours.’ Everything in Salaama road rotates around a spa, a massage, or a guest house. But why is everyone in Salaama in need of a massage? What’s the root cause? At least let’s see some hardware shops, some banks, not in Salaama, there’s only one business, and that business is to get everyone massaged.

The Upcoming Artistes
Okay, the media and the music fraternity have not had kind words for each other. But truth be told, not everyone is meant to be a socialite or music star. Yet, the people in Salaama have grown up with this belief that they will all be superstars. God forbid you befriend a Salaama upcoming artiste. They will bombard you whatsapp with calls; “Bro I have a new hit, please share the link.”

In Salaama, it’s about music studios and millions of new songs. Most of the songs never make it to the scene, yet these chaps never give up. They never lose hope that one day, by hook or crook, they will take the world by storm. However, based on evidence on the ground, it’s clear most will never make it past the backstage. The closest they get is to have a guest performance at one of those Makindye stages and share a photo with a one OS Sooner!

In Salaama, it’s about communism, everything is owned by all, and owned by none. You are never sure about your own relationship status. Your boyfriend on Monday could be someone’s side dish on Tuesday, and they could be your ex by Wednesday. Things move so fast in Salaama road. If you expect anything, do not expect loyalty on this road. Expect rare hairstyles, expect rare dance moves, but do not expect a long-lasting relationship.

Should Salaama Road get Independence?
After spending some good time in this area, I now move to propose that Salaama road is fit for a break away. Together with areas such as Najjera, Bulindo, Nansana, Kireka, Zaana, these should never be counted as Uganda.
As per the Pareto Principle, these areas make up for 80 percent of the confusion in Kampala. If you have an area where everyone thinks they’re an upcoming socialite, an upcoming musician, an upcoming boutique owner, what better way that to let that area achieve self-governance?

There’s no way for example Nansana can be part of Uganda. In the same aspect, Najjera, and the Subaru drivers can’t belong to Uganda. It thus goes without mincing words that Salaama road is in its own world. It deserves its own President, its own Parliament, its own schools and syllabus. Why should a student in Salaama struggle to go through years of Chemistry and Physics when all he needs to know is how to fake one’s way out as a Ugandan musician. And it doesn’t take much to be a Uganda musician, a few lip syncs, some autotunes and acres of media airtime. In Uganda, a musician has more media stories than songs.

The saying always goes; “the road to Hell is paved with good intentions”, allow me to say; “the road to Salaama is paved with potholes, failed music careers and massage parlors to soothe the failures.” When we get to Heaven, the people in Salaama road will get exemptions, they’ve already served their sentences on earth!