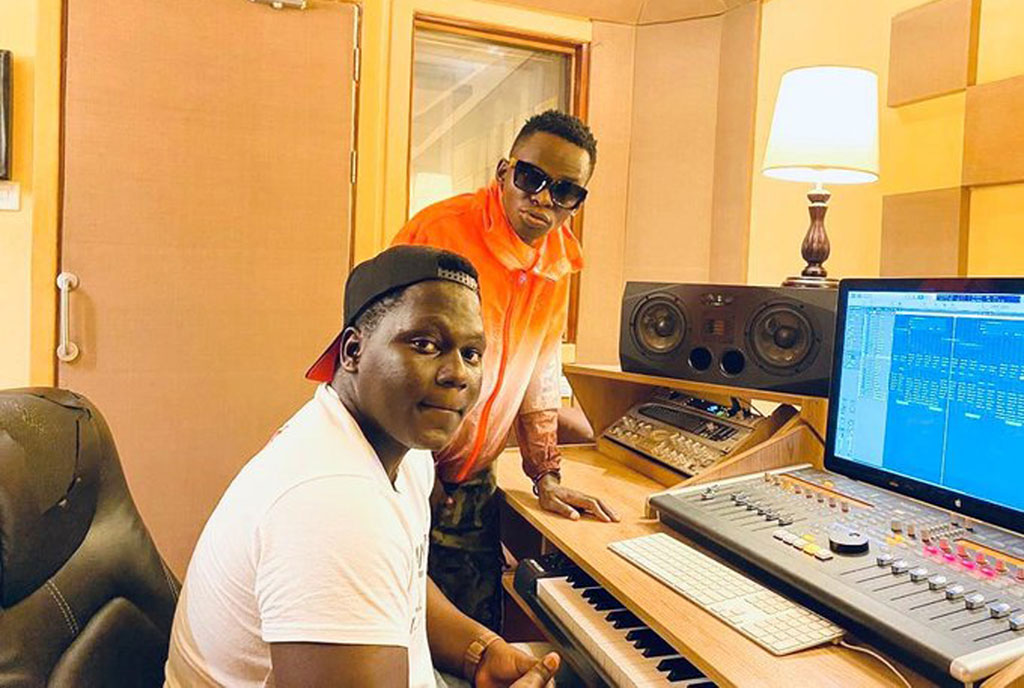 Axon, is that your real name?

Tell me about yourself.

Axon is a music producer as well as a sound engineer who works at BramBram records.

You currently have some of the maddest bangers on the charts, give me a glimpse into what led to all this.

Professionally, production started in 2019. I was in Naalya and that is where I set up my first studio. That’s where the journey started. I had artistes such as Chenkobe, Denesi, Lamu, among others. From Naalya, I moved to Najjera and worked with the Bantu Vibes for a solid two years and now I am here (in Ntinda, BramBram records)

In the process of moving to Najjera, I met Selector Jeff. Tip was already out but he jumped on the remix and I started working with him on the different artiste projects.

We made a song with Fameica, we made one with Sheebah and I made another one with John Blaq again after Tip, and that was the journey if I am to summarise it for you. We are now at BramBram records where I work fulltime.

Before that were you independent?

What led you to sign with a record label?

BramBram is Axon and Axon is BramBram. Bram means brother. So, we started BramBram with K Derrick and team members such as Twaha, who is my manager and runs the place, among others. We have many artistes under our label such as Billy Yung, Genesis, Chenkobe. You will get to hear some of the music we are working on.

So, it is safe to say that you are not just signed to the label like the public has been saying but, you are a partner as well?

Let the public say what it wants to say and this is an issue I do not want to discuss even in the media. In the end, the public is always going to have its own opinion. It is not good to explain oneself, but a few people will always know the truth.

What influences led you into the world of production?

I am not inspired by any one individual. When I was young. My mom played a lot of Philly Bongoley Lutaaya music and various reggae and ragga sounds. Those were the days of radio cassettes and tapes but it was mainly the cassettes that had the magic.

I grew up listening to sounds such as Elly Wamala, Philly Bongoley, Maddox and the like. With time, I started picking inspiration from producers such as King Jammy; I am sure you don’t know him but you know most of his sound because he was behind the sound of Chaka Demus and Pliers in Murder she wrote. That kind of sound.

In my high school, I was listening to a lot of Popcaan, I got to realise his producer Nuttnice was behind guys such as Vybz Kartel. So, as I got to dig deeper and pick inspiration from such characters. It is like all these legends are in my head.

Have any of these inspired your current “signature” style?

What does it take to get to the place where one is producing high quality sounds and being of repute? Where is the magic, is it in the equipment?

It’s like the concept of driving. If a person is a terrible driver, however, new or safe the car is, they will crash. I used to take many people to my first studio and they were surprised I was doing monstrous bangers such as Tip from there. In my mind, I knew that regardless of the equipment I owned, I had to work. There are thousands of people with better equipment but without quality sound. Ambush me and take me to the US right now, without my computer, without anything. I will still give you the same work.

Secondly, if you are a producer, it has everything to do with passion. A producer should go to studio and produce everyday like any other person goes to their job or office. Wizkid records every day, he created magic with Tems way back before he even released the album but look at what the song is doing to the people. 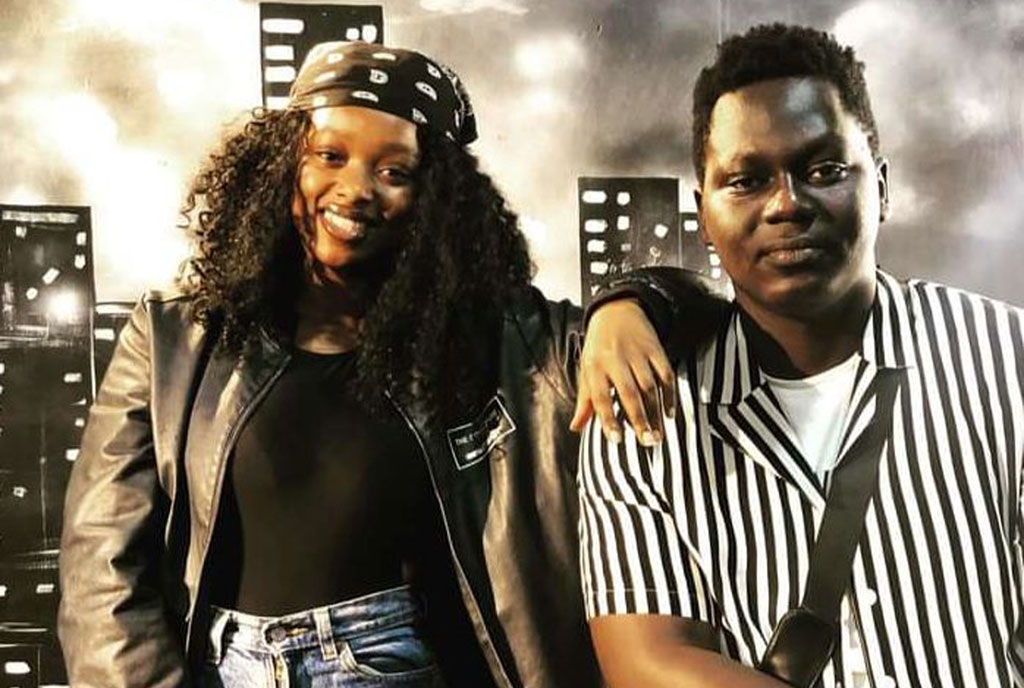 What are your prospects?

Let me start with BramBram. At BramBram we have projections of being the best not only here but in Africa and all over the world.

We have talented artistes here, why can’t we be like those labels? It is all about the passion and the work you put in. Trust me when I tell you that in the next five years, a Grammy is coming to BramBram. Those are the pinnacles we are trying to hit, not only by desire but the kind of work we are investing in this game. Good music speaks.

You are synonymous with lots of good urban music. Why do you think the mainstream has not yet gravitated to this sound?

First, people responsible for music in the mainstream have a connection with the already established artistes. And they seem to love a certain kind of music.

By the way, Ugandans know good music. That is why they will play other urban artistes such as Omah Lay and Wizkid at the bar but they just don’t want to support their own. But then when you find Ugandans like Ms. Banks who have made it in the UK, they will want to support those ones. But that is going to change, let us continue doing the right thing and everything else will fall into place.

I consider producers to be huge stakeholders in the game, what is your take on the possibility that our industry is bleeding when you compare it to other major players in Africa. What do you think is the problem?

Philly Bongole Lutaaya is considered one of the best African artistes and is one of the most respected. His music crossed borders alongside his contemporaries. He never recorded from Uganda; he was always recording in Sweden doing European tours while singing Luganda.

Uganda has always been on the map. It is simply the efforts of the generations that came afterwards and the art in which they did things that corrupted the progress.

We need to look at the bigger picture. There is market beyond Ugandan borders. I can compete with Wizkid soundwise, in that I can create a song with the same sound quality as one off his album, which means we can both play at the same level.

The difference is that he taps into a wider market. During the (Covid-19) lockdown, Nigerian artistes were making money off their IPhones while the ones here were fighting for money. We have talent good enough to push us to the international market.

There is a new wave of talented kids such as Bantu vibes, Zagang who are putting out exceptional stuff but the mainstream does not seem to be giving them attention. What forces are stopping them from transitioning?

There is nothing stopping the transition. Look at Swangz (Avenue). Before they came in, there was a sound the Ugandan scene was accustomed to. Then Swangz came in with new kids such as Zagazillions (formerly Young Zee) working with the likes of GNL Zamba, Moze Radio and all these guys were just coming up.

Now the onus for our generation is to break those international chains. Some people claim we are producing music that does not sound Ugandan, but look, we are doing it in Uganda; people like CNRD and Chenkobe are releasing rhymes in Runyankore, others in Luganda.

Within five years, we shall have a Grammy from BramBram. So many things are bound to change.  There is going to be an international level type of race. The music is going to shift.

You’ve made very many Wizkid references. It was a proud moment to see him and Burna boy win Grammys. What was your take from it?

If Wizkid can win a Grammy so can I. It is also a huge indicator that African music is taking over and it is up to us to capitalise on this golden moment.

Your latest banger with Fik is immense; as a parting shot, tell me how this song came about.

As I told you earlier, I had already established links with Fik on Stupidi. So during the lockdown, he texted me asking me for some beats. So, there was this beat I was working on. It was an ordinary beat. I had actually recorded it in the lockdown. I sent him the beat and he was so impressed.

So ,he texted me back asking when we could link up to record. At the time, I was spending a lot of time at Zaga Zillion’s place in Munyonyo and it is there that Fik met me to record.

At the time Fik was asking for the song, I fell terribly sick and was off production for a while. I was also trying to set up BramBram. Fik suggested picking me up so that we could finish the song at Artin’s but I was too sick to go. I just sent the files to Artin who mastered the song and so Fik released it.

I was proud to hear people applaud the production. And by the way, in studio, the “I, I, I” was just a melody and I told him to put it there as well and that’s how the banger was formed.