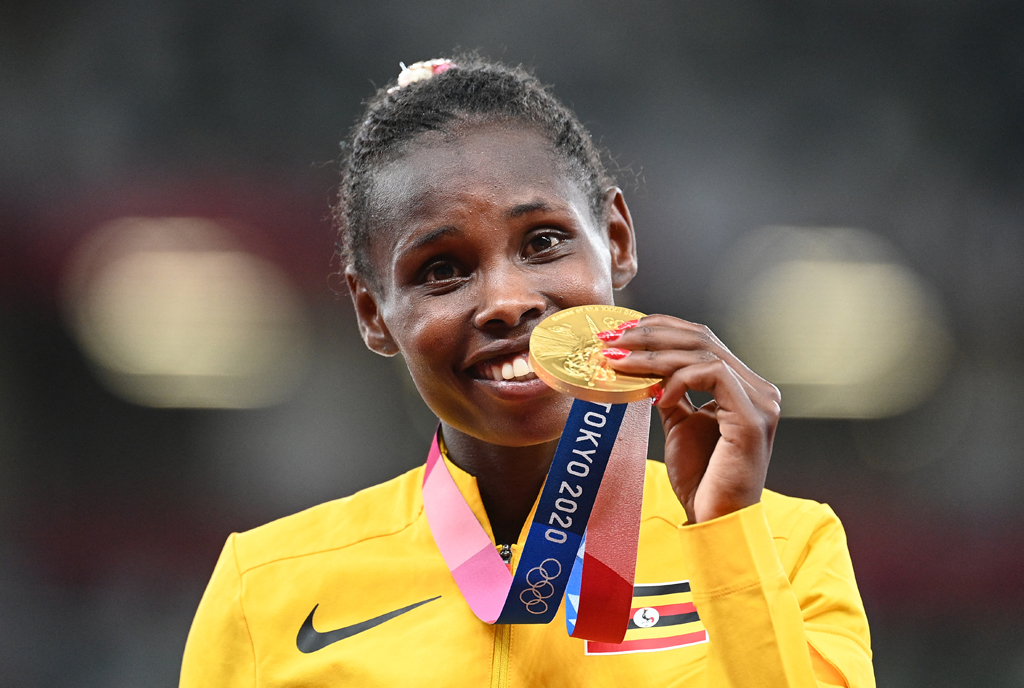 Gold medallist Uganda’s Peruth Chemutai celebrates during the medal ceremony for the women’s 3000m steeplechase event during the Tokyo 2020 Olympic Games at the Olympic Stadium in Tokyo on August 4, 2021. AFP PHOTO

A Sabiny man has asked the Uganda Police for protection against men he said have started passing in front of steeplechase star Peruth Chemutai’s family home with “bad intentions.”

In a letter to the IGP, the man, only identified as Cherop, said there was urgent need for anti-terror officers to stave off men who are interested in partaking in an already mined gold.

“They pass here hissing all the time and I’m worried they are after my wife,” Cherop wrote.

“It’s my humble plea that you authorise the anti-terrorism force to protect us from such men. Peruth is mine but now every man wants her.”

Cherop said he also feared for his life, that there was a possibility of him being bumped off to free his hand from the gold-medal-worth of a wife in Chemutai.

“I could have asked for SFC from the President, but I’m being humble like my wife, so only send police since my wife is an officer too,” he said.

An East African country has offered to refine Olympic gold medals won by East African athlete to “give it more value.”

The country earlier this year opened a $5m gold refinery, the first of its kind in the region. It says it might have failed to understand the hullabaloo about winning Olympic medals but it can be part of the grand celebrations by refining the medals won.

“We refine gold here but we understand the one sons and daughters of the region are enduring the sweltering heat in Tokyo to win is actually made mostly of silver,” the country said.

“We can eliminate the silver in the medal and make it pure gold.”

The tiny country also encouraged those who want gold medals for the next Olympics to get from the refinery and go with it to Paris so that they are not under any pressure.

A legislator from Busoga on Friday sent Parliament into confusion when he asked to move a motion to honour Tokyo 2020 Olympic medalists for raising the National Flag higher than ever.

However, the good intention failed a steeplechase hurdle almost immediately when the legislator attempted to express himself. His grasp of the Queen’s language refused to cross the Olympic finish line in his head.

“Cheptegei, Chemutai and even Kiplimo, they have done us pride (sic),” the MP said. “We must prepare to eulogise them on the floor.”

As some choked with laughter, a few others took the matter gravely and wagged fingers. Others told the MP to use Lusoga instead.

“I only meant we bring them here and say nice things about them. Isn’t that eulogizing?” he asked innocently.

This is a parody column