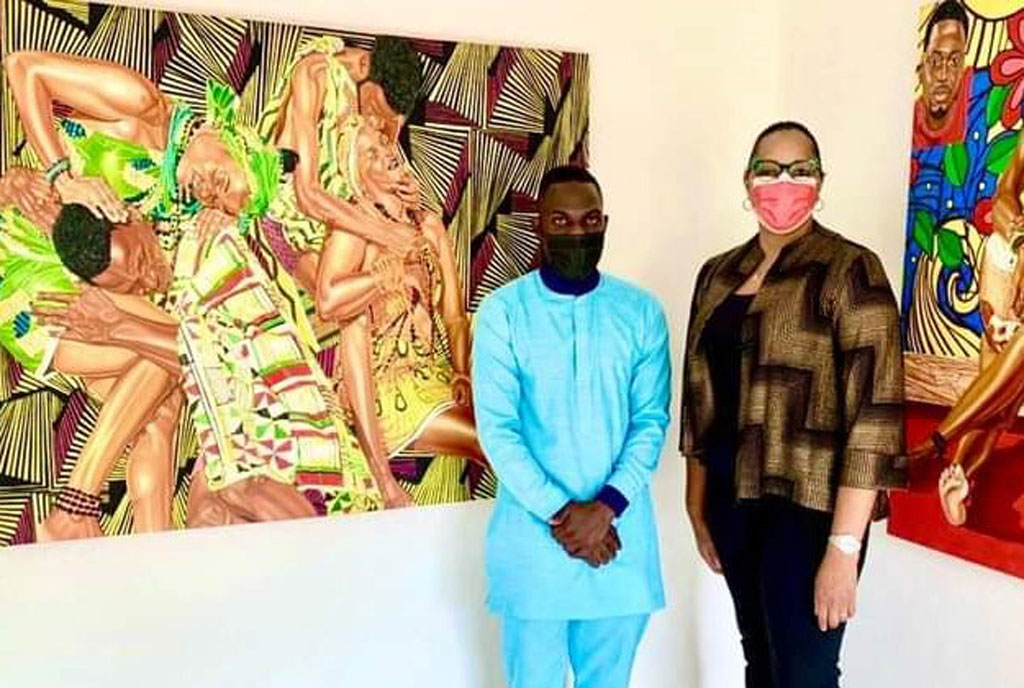 Remmy is joined by American Ambassador Natalie E. Brown at the opening of the exhibition. Photo by Andrew Kaggwa

Talking art. Remmy Sserwadda’s Friend Request exhibition was inspired by the need for humans to connect.

It is hard to remember the last time Ugandans were out there consuming art.

It is true different performers had found ways of getting themselves out of an already stretched lockdown, visual artists were also trying when the second lockdown was announced.

For instance, Remmy Sserwadda was set to have his Friend Request exhibition back on June 12 and he had looked forward to the moment because for any visual artist, a solo art exhibition is equivalent to a concert for a singer. It is a sign of maturity.

Sserwadda had been part of exhibitions before but they were collaborations, so this was the first one that would present his vision and art in its full majesty.

But as fate would have it, before his exhibition could take place, the number of Covid-19 cases and deaths started surging – the gallery postponed the exhibition indefinitely, then the second lockdown was activated.

“During such times, I had to be sure it was really happening,”  he said.

The exhibition, Friend Request, is aptly inspired by the need for humans to connect with different people through technology – But it is not an exhibition about people using social media applications such as Twitter, Instagram and Facebook. Instead, it is a discussion about people’s quest to reconnect with who they are, revisiting their traditions and learning more about their ancestors.

In this case, he presents pictures that present individuals separated generations ago trying to learn about each other and reconnect – something he calls a homecoming of sorts.

It is an exhibition that looks at life, identity and race – in one set of works, you will catch the artist talking about Ugandans and their connection with another Ugandan in the diaspora or a British of Ugandan descent such as Daniel Kaluuya while in another art work, he will be showing you how singer Alicia Keys is a representative for the new African beauty.

Sserwadda is a realistic artist whose work usually deals with very detailed backgrounds of African prints, mainly the kitenge. Which explains the colourful nature of his work. Much as he talks about many things in his works, he often allows his surroundings to inspire him. For instance, for many of the works he has displayed so far, there are familiar faces, he says many of these are his friends, while one is his brother.

For this particular exhibition, Friend Request, he has a set of art works dedicated to love but he says that he still lets the theme of love carry through the other works on display about identity and race. According to Sserwadda, love is a big influence on many of the decisions people make.

Some of the works delve into society commentary, especially the Black Lives Matter movement. He says he made this works at a time the killing of George Floyd was in the news. In the pictures, the artist shows how the American common man and celebrities were brought to the same page to fight injustice.

While in other pictures, he takes us through the stage of dating, where a man meets a women and starts having intentions to take the relationship to the next level. While taking us on this journey, he shows us how things such as starting a family or marriage are communal affairs, especially with the many people a couple involve in their decision making.

The exhibition opened on Saturday and will be running until September 24.