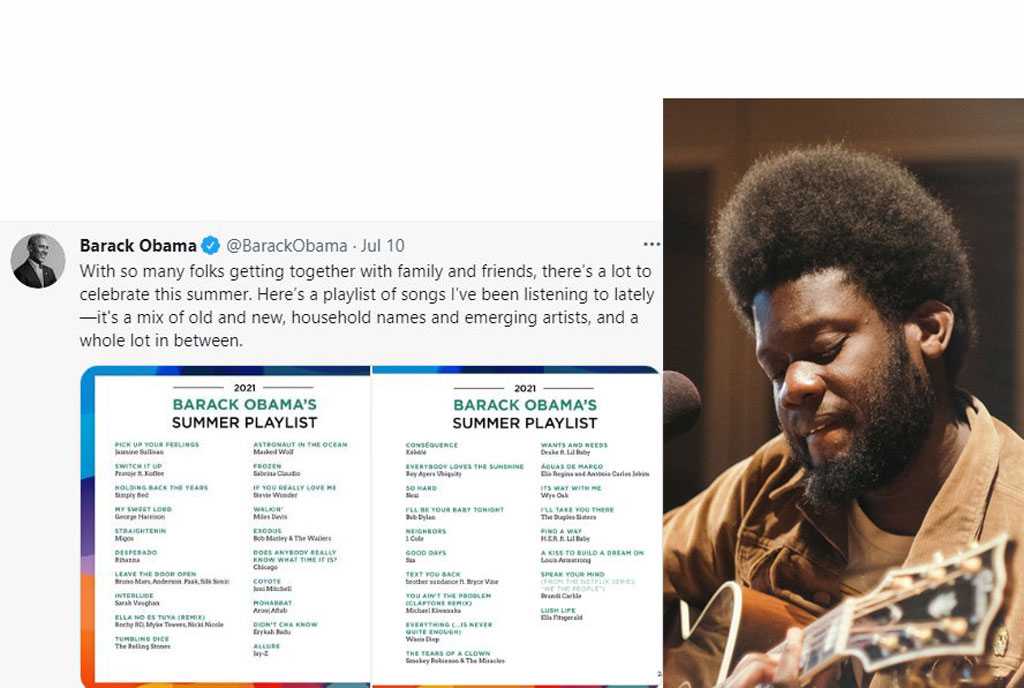 Former US President Barrack Obama a few days ago released an 18-truck playlist for 2021 summer.

Notably on this list, is Michael Kiwanuka’s ‘You Ain’t the Problem’ which comes in on number 8. Kiwanuka is a Ugandan British artiste and to make it on Obama’s playlist is a big deal.

The playlist also features tracks like ‘Wants and needs’ by Drake ft Lil Baby, ‘Allure’ by Jay-Z, ‘If you really love me’ by Stevie Wonder, ‘Neighbors’ by J Cole, ‘Desperado’ Rihanna, ‘Leave the door open’ by Bruno Mars, Anderson, Paak, Silk Sonic’ and ‘Find a way’ by H.E.R ft Lil Baby among others.

“With so many folks getting together with family and friends, there’s a lot to celebrate this summer. I put together a playlist of some of the songs I’ve been listening to lately — it’s a mix of old and new, household names and emerging artists, and a whole lot in between,” Obama posted on twitter

With so many folks getting together with family and friends, there’s a lot to celebrate this summer. Here’s a playlist of songs I’ve been listening to lately—it’s a mix of old and new, household names and emerging artists, and a whole lot in between. pic.twitter.com/xwTPun9wsw

The last list Obama released had Tems and Wizkid’s ‘Essence’.

Born on 3rd May 1987, Michael Samuel Kiwanuka is a British-Ugandan singer-songwriter and record producer whose 2012 debut album, Home Again, went gold in the United Kingdom and his second album, Love & Hate, debuted in 2016 at number one.

He has been nominated for numerous honours, including the MTV Europe Music Awards, BBC Music Awards, The Grammy Awards, and Brit Awards among others. He was born to Michael and Deborah Kiwanuka who escaped the Amin regime.