He found a future in music 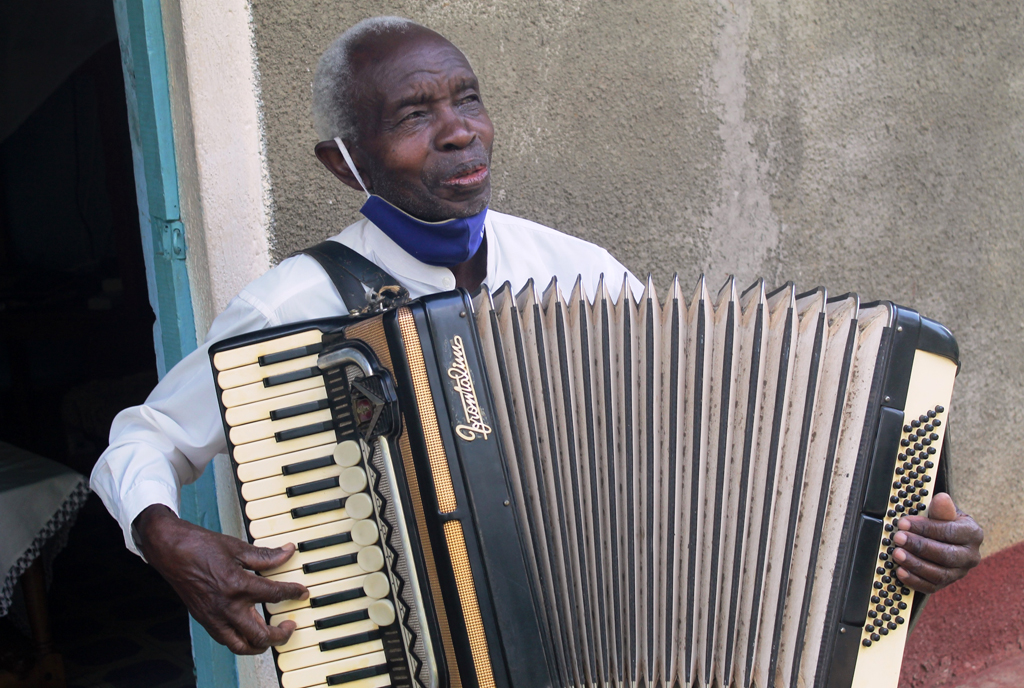 Ivan Kabwijamu Adyeri, 84, is a retired teacher and former army staff sergeant major.
His teaching profession started in 1960 and ended in 1971. He later joined the army where he served until 1979 when the government of Idi Amin collapsed. He says it is not only formal employment that can bring food to the table after retirement.
Kabwijamu, a resident of Isekahungu village in Fort Portal City, says his love for music has become a source of income.

Having read music extensively in 1967, he acquired a certificate in Music in East Africa after sitting exams from the Universal Cambridge Council.
He composes songs, plays musical instruments, trains church choirs and before school closure, he has been teaching music in different schools.
“Had it not been music, I would be wallowing in misery,” he says.
“I started teaching music and composed songs when I was still in service to date. I am writing books about music now,” he adds.

His love for music was born when he bought his first musical instrument which opened his space.
Through his little savings, Kabwijamu bought a number of musical instruments which he has at home including an accordion which he bought at Shs 500 in 1975, a keyboard, recorder, flute, thumb piano and fiddle.
He has also taught two of his sons, one who was in the police band and another one is a trainer of music in schools.
The octogenarian says he will not retire from music because it is part of his life and source of livelihood.

Professions
He says in 1971, the government made an announcement over the radios calling professional teachers to join the army and become instructors, which he applied for.
“I joined and trained for six months. I become an education instructor in the army up to 1979,” he recalls.
While in the army, he grew through ranks from private to corporal, sergeant, sergeant major and staff sergeant major.

Kabwijamu says in the army in 1975, because of his talent in music, he was taken to the headquarters in Kampala and he was in charge of training army bands.

Because of political instability when president Amin’s government was overthrown, he was arrested and taken to Tanzania where he was later released after finding out that he was not guilty of any crime.

“In December 1982, I returned home but I found all my properties destroyed during the war and my wife had left our children,” he says.
His talent in music earned him another opportunity to work with St John’s Cathedral of Ruwenzori Diocese and he became a music trainer of the church choir as well as an organist.

At that time he taught music in primary schools such as Kahinju, Rusekere, and Kamego which earned him a living.

Back to teaching
To sustain his family, Kabwijamu, went back to teaching in 1984 and he was posted to Buhinga Primary School in Fort Portal and a year later he was transferred to Bukwali Primary School.
“I had to take care of my children and work near home,” Kabwijamu says.

In 1987, he was transferred to Kitumba Primary School but because the school was far from his home, he rejected the transfer and quit teaching.
“At that time I was planning to retire and I received a transfer to a distant school yet I had a family to take care of. I raised the matter to the powers that be but it fell on deaf ears, thus I quit,” he says.
Because he left teaching and the army before official retirement age, Kabwijamu did not get his retirement package.

After quitting teaching in 1987, other schools hired him to teach music. These include Kahinju Secondary School, Nyakasura School, Kamengo, Rusekere, Mountain of Moon University in Fort Portal. Currently, he is a teacher at St Mary’s Minor Seminary in Fort Portal.
Preparation
He says when he was still serving as a teacher and army officer, he saved Shs1,500 from his little salary.
Kabwijamu used this amount to buy a big piece of land and built his home there in 1982.
He says he regrets joining the army adding that he did not know the government would be overthrown and he loses his property.

Advice
The retired teacher advises those in formal employment, if interested in retirement benefits, to stay at their workplace until retirement age but also bear in mind that any time, retirement will come knocking.
“If I had not planned for my future I would be nowhere. So, if you are working look for where you can invest, especially buy land.”
“Also those with talent, exploit it. Talent can help any time,” he says.

Typical day
Because of lockdown, he is always busy reading, writing music books and also composing songs.
Before lockdown, he visited schools where he teaches music that is examined by Uganda National Examinations Board (UNEB).

Today
He is composing the anthem for Fort Portal tourism city, writing a music book for learners in nursery and primary schools.
He wrote a book which he sent to the ministry of Education for approval and he was asked to make some changes.

Kabwijamu also wrote another book titled Enganyiko Zaitu Ezaira which is in the final stages to be completed. He say sent it to Prof Oswald Ndolerire of Makerere University for advice.