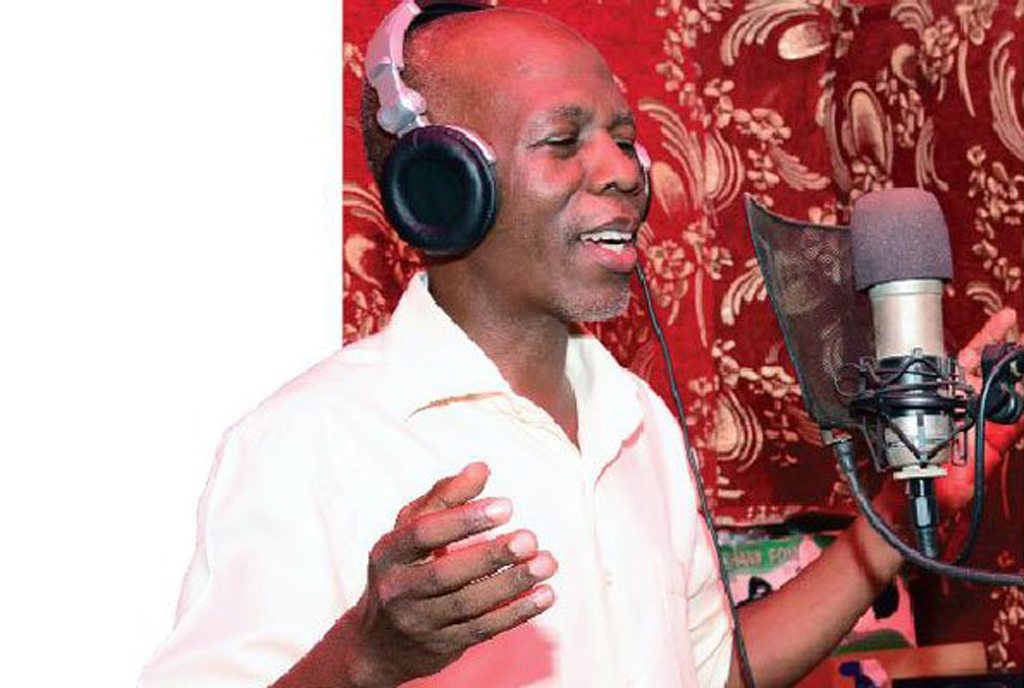 Growing up, music was not a big deal to Joram Ssozi. He says most of his siblings served in Anglican Church choirs without any recognition.

Just like in Uganda, gospel music in Rwanda has its origins with the missionaries. Author Stephen Kalimba wrote in 2015 that prior to the 1994 genocide, gospel music borrowed heavily from traditional church hymns and was mostly heard in churches with limited music shows or media coverage.

Ssozi’s prominence in Rwanda perhaps reveals more about the twisted nature of life. In 1994 President Juvénal Habyarimana was killed and his Hutu army, extremist militias began taking revenge on the Tutsi community blamed for the assassination. During 100 days in 1994, at least 800,000 ethnic Tutsis and moderate Hutus were killed in the genocide in Rwanda.

Pious, exceptionally talented and down-to-earth, Ssozi did not study music but it set him off on a spiritual journey and a life-changing career.

Ssozi’s musical journey started with the arrival of Christine Birabwa at Ssozi’s local church when Ssozi was about 16 years old. Birabwa, who was fleeing the war in Luweero, skilled the church choir on basics including solfa notations and key signatures in music. From Birabwa, he was inspired to become a music conductor.

In 1990, Ssozi relocated to Kalerwe in Kampala to work at Marie Stopes Kavule Clinic in Makerere as the office messenger, stores manager and accounts clerk while attending Kalerwe Seventh Day Adventist (SDA) Church.

With other youths at church, they formed a singing group which transitioned into the Living Hope Choir in 1992. He worked for four years before resigning his clerk job.
Unemployed, he returned to his home village in Nakanaku, Nangabo Sub-county to stay closer to her mother Eriosi Nabunnya, who had been battling a heart problem for many years.

Ssozi has a special bond with his mother who separated with his late father Hannington Ssebutinde, when he was just six years old. Ssozi is the tenth born out of 11 children, raised by his mother.

Off to Kigali
In July 1997, Samuel Kigozi, a friend he had met in Kampala through Golden Gate Choir, requested Ssozi to travel to Rwanda and help a gospel music group that needed caretakers.

Ambassadors of Christ Choir, a gospel singing group, based at Remera Adventist Church in Kigali, Rwanda was formed in 1995 right after the genocide with 25 members mainly students. Its core purpose was to: Preach peace and reconciliation in a country that was torn by the war, racial and national prejudices, as well as represent Christ and carry forth the message of His love and grace into the entire world.

“The choir vice chairperson [Rachel, the first lead soprano] was going for university studies. She needed someone to take her place,” Ssozi recalls.
Ssozi saw this as an opportunity to share his expertise. Rachel left alongside three other members including the keyboard player.

Ssozi travelled to Kigali and one of the first acts was to play the piano, a job he says was excellently executed with enthusiastic backing from John Kanimba, the choir patron.
Kigozi was the music trainer while Kanimba used to cater to the choir needs and paid a stipend to the two expatriates.

Borrowing a leaf from Uganda’s Golden Gates Choir whose vibrant music had wowed audiences, Ambassadors of Christ had a new feel of music. Although Ssozi had friends with Rwanda roots in Kampala, he had never taken trouble to learn Kinyarwanda. Ambassadors of Christ Choir had started by translating songs they had learned from Uganda into Kinyarwanda.

The choir’s music called upon Rwandans to show empathy to both victims of the genocide and so-called revenge killings by looking at Christ. The message was that death is equally terrible for everyone.
“We traversed the country with evangelist Phodidas Ndamyumugabe ministering at evangelistic crusades,” he recalls.

Ndamyumugabe, now a professor at the Adventist University of Central Africa (AUCA) in Kigali, used the choir during the evangelistic campaigns throughout the country.

“This was the springboard to what we are now. We became popular and personally, this was a turning point in my life,” he says.

In 1998, the choir recruited more members in particular, Milly Kamugisha, a soprano just before the choir recorded their second audio album titled ‘Babulooni’.

“Ebbaluwa, a song that talks about how some people ignore the Biblical message, opened doors for the choir to outside markets as they made a tour to Uganda.

“This was not our first time in Uganda but our earlier tours passed ordinarily. Fans did not feel our presence then,” he says.
He says, their previous songs also started playing on airwaves.

In 2007, Imirindi Y’uwiteka, a song that urges people to return to God,left a footprint in Uganda, Rwanda, Burundi, DR Congo and Southern Africa.
Ssozi says the breakthrough came during their fourth album in 2014 with the big hit of Mureke Mukunde with Kamugisha, the lead singer. This new contemporary style was foreign to Rwanda. The other hit song was Yesu ni nzira.

“As a project, we started translating our music into Swahili bringing Kwetu Pazuri (Happy and peaceful) to the Swahili-speaking audience. Yvonne Umulisa’s voice brought the hits to life. We were no longer a Rwandan singing group, but an international Adventist choir,” Ssozi says.

“Our style was not embraced at first. Many used to call it a Ugandan style but many youth choirs adopted it. This is now the revolution we pride in for Rwandan music.
The music transformed Ssozi’s status in Rwanda, and to show appreciation, the choir was always invited for the concerts commemorating the 1994 Genocide that normally happens in April.

Admitting to having been an influence in the way gospel music is presented, he has not won an individual award although the choir has prominently been rewarded.

Rubbing shoulders with people who had experienced the war firsthand, he was happy to be alive and felt privileged to serve God at all costs. He began to understand the people and their history.
Sande Hakizumwami’s family hosted Ssozi while adoring fans nicknamed him Mwalimu in tribute to his efforts of teaching music to many.

Obstacle
The choir  lost two members, Ephraim Gatera and Philbert Manzi [who also worked as a journalist at Radio Flash], in a road accident on April 9, 2011 on their way from Dar es Salaam where they had gone to perform.

Ssozi, who did not sustain major injuries, says it was a dark  and long night as some members required surgery in India.
He says their bus was speeding to Kahama (just over 100km away) when their driver overtook a trailer and they slammed into an oncoming truck which sliced their vehicle into half, ripping passengers that were seated opposite the driver.

The choir was later airlifted by a Rwandan Airforce helicopter after receiving first aid at Shinyanga Hospital. Crushed and devastated, many doubted the next step. “It was a terrible period but no one deserted the choir apart from those that got married or got work elsewhere,” Ssozi recalls.

Following the accident, he composed another set of songs of hope with the flagship melody Kwetu Pazuri, loosely translated ‘our heavenly home’. This song, he says, gave the choir international recognition.
“Tuli bapya”, another song that talks about their renewed hope after their world shrunk, gave the album a real push in Uganda.

Following a successful concert in December of 2011 in Dar es Salaam, there were requests to hold a series of such public performances in other East, Southern and Central African countries with a climax on May 6, 2012 in Nyayo National Stadium, after a recorded live concert aboard a ferry in Mombasa.

Eking a living as a gospel musician
For three years, Ssozi did not earn a salary in Rwanda but his songs played continually on Rwandan radio stations and the choir was top choice whenever the evangelists called for music. Such appearances made the choir and Ssozi a household name in Rwandan gospel music circles.

“When I am on the streets in Kigali or Tanzania, many people stop me for greetings which is never the case in Uganda,” he says.
However, the music was not getting the deserved prominence.
Although Ssozi has achieved milestones in Rwandan music including the Ambassadors of Christ winning the 2018 Groove Awards ‘Choir of the Year’, he talks of a ministry that remains largely voluntary.

Currently, the father of three, writes music for other choirs charging Shs200,000 for each song. He has no record of all his music but he boasts of writing more than 1,000 songs.
Beyond being an artiste, he produces music at a home-based studio in Kyengera, Kampala.

For the choir to survive, they sell albums or hold concerts and receive invitations to perform at social gatherings, especially weddings.
“But since the Covid-19 outbreak this has not been possible,” Ssozi says.

The choir which is composed by only Rwandans apart from Ssozi, has also been good cultural ambassadors for Rwanda, performing the traditional gospel songs, dancing, and drumming, and most importantly, messages of peace, hope, and reconciliation.