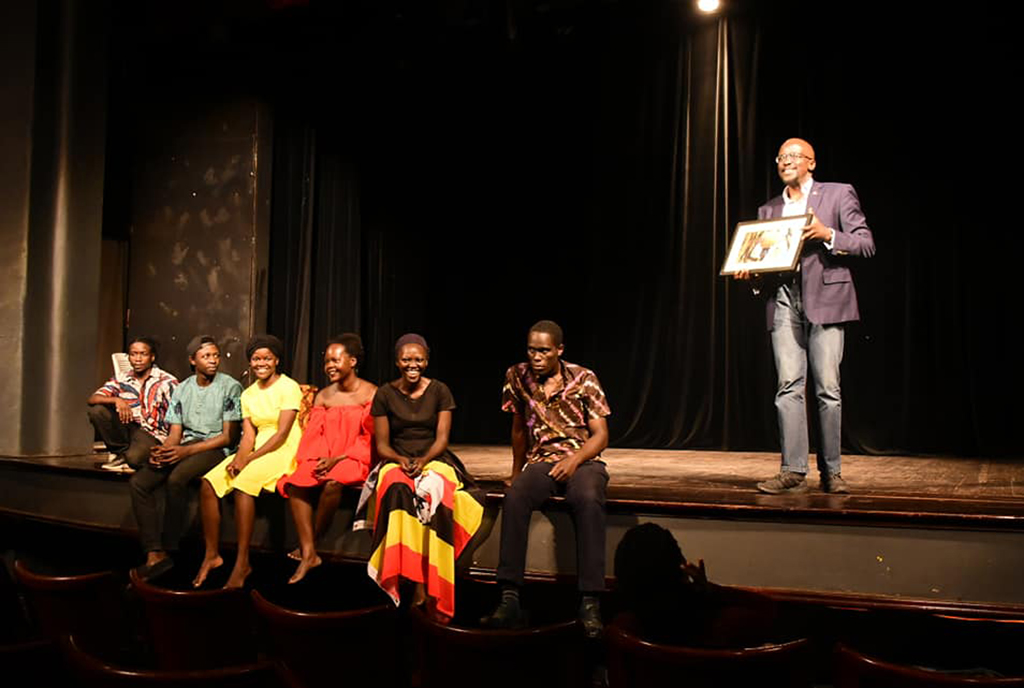 Actors on the National Theatre stage after a performance. The stage was recently upgraded from an analogue to a digital system. PHOTO/ ABUBAKER LUBOWA

Yesterday, Uganda joined the rest of the world to commemorate the World Theatre Day. This day has been celebrated since 1962 by International Theatre Institute (ITI) centres, ITI cooperating members, theatre professionals, organisations, universities, and lovers all over the world.
Various institutions, mainly in the field of arts, are expected to take stock of their activities in promoting the theatre, art form in the country as well as make people aware of the value of theatre and lay strategies for future actions.

Uganda National Cultural Centre (UNCC) and partners commemorated the day through a symposium with keynote speaker, Dr Jessica Kaahwa, also president ITI-Uganda Chapter and panellist; Dr Richard Kagolobya and Ameria Mbotto. We streamed the event live on our digital platforms (www.uncc.co.ug, Twitter/Instagram: UNCC16, FB/YouTube: ugandanationalculturalcentre).
In Uganda, one cannot talk about World Theatre Day without talking about the Uganda National Theatre. It is administered by UNCC and was officially opened on December 2, 1959, after an Act of Parliament made it possible to establish UNCC in 1959.

As we celebrate World Theatre Day, I would like to share what makes the National Theatre stage a stage like no other.
A stage serves as a space for actors and it’s a focal point for the audience and for purposes of this write-up, I will restrict myself to the proscenium arch stage at the National Theatre.

Lighting is an essential part of theatre due to the fact that it brings any given story to life. It doesn’t matter how great the script may be, how exceptional the act is, if the lighting is not good, it could easily ruin the performance.
Lighting creates the aesthetics, including effects, visibility, focus, composition, mood, and motivation, for example, highlighting key moments and directing the audience’s focus.

The National Theatre stage has the following lights: Front of house lights, spotlights, a follow spot, footlights, cycloramas, boom lights, house lights and working lights.
The National Theatre stage recently upgraded from analogue to digital system. However, we did not completely phase out the analogue system, meaning both systems can work alongside each other.
Stage spots are 36 and suspended from above and in three sets, each with 12 spots. They give a hard-edge effect used to light an actor or object on the stage. They are used to highlight a character on stage accompanied by coloured filters. Besides highlighting a character, stage spots separate a character from the backdrop and characters around them to emphasize the emotion, action, or expression of the character.

Front of the house lights totalling 24 at a distance of 30 metres from the stage, are placed at the back of the auditorium and above the audience. Each light is 2000wts and that explains the distance because of the heat each one emits. These lights light the front of the stage/actor and the required effects as per the given performance.
House lights light up the auditorium, they are usually switched on before and after a performance to aid enabling the audience to safely navigate the auditorium in terms of exit and entry. On some occasions, they are used when the audience is involved in a production, for example, when the actors interact with the audience. These are the usual bulbs with normal watts of say 20wts. They are 150 in total.

Working lights are normal lights on stage used by the stage crew when rigging, cleaning, or while preparing the stage for a show. Like house lights, these are fluorescent tubes.
Follow spot. National Theatre has one follow spot placed at the back near the control room. It is 2000wts and its purpose is mainly to follow a given character or light a specific object aimed at creating the desired effect. A follow spot works best when the rest of the stage is in the dark. We purchased it at Shs12m. It is placed on a stand to enable the operator to pan or tilt it as per the given directives from the director.

Footlights are placed on the apron and they are 200wts. They are in strips of three rows and different colours. Their purpose is to illuminate the lower part of the character or create illusions like dwarfing a character on stage or ghost effects.

Cyclorama lights are at the back of the stage and are meant to create silhouettes. They are in a strip. Boom lights are offstage with 1000wts. They give a wash from off-stage lights to evenly light the stage.
A smoke machine is a flexible machine on stage meant to emit effects of smoke/fog as per the given performance. National Theatre stage has one smoke machine.
National Theatre stage has in-built sound to provide all desired sound effects for given performances.

Drapes, commonly known as curtains in theatre, are meant to conceal action/scenery not meant for the audience, punctuate acts, and create sightlines and a signal that a show is over or has started yet. National Theatre stage has a safety curtain, house curtain, legs, borders, traverse, and cyclorama.
The house curtain is usually up when there is no action on stage and during stage preparation. It comes down before a performance. It weighs about 400kg.

A safety curtain is a metallic sheet across the proscenium opening. It the first curtain before others and it is meant to protect the stage from the audience in case of fire and vice versa.
Traverse curtains divide the stage space into parts as per the given performance. They can be used to provide sceneries or backdrops they are two pairs.
Tormentors are meant to provide initial sightlines. They are plywood painted black and placed on both sides of the stage. They are two in number.

Legs
Legs prevents audiences from seeing what is off stage, especially giving sightlines. Borders are above the stage and are meant to conceal the audience from seeing the roof of the theatre. They are six in number.
Cyclorama/backdrops have been placed at the back of the stage upon which sceneries are created/placed.
Stage openings are means to create desired illusion/effects as per the given performance. The National Theatre stage has a trapdoor, burial grounds, and an orchestra pit.
The trapdoor is placed at the centre of the stage with entry to the basement. It is used to create ghostly acts or acts where characters come from below the stage or go below the stage.

Burial grounds are upstage across and are meant for scenes for burring characters in the view of the audience so that the illusion of burial is real.
The orchestra pit is placed at the front of the stage at the apron below the stage. It is connected to the basement and is meant for musicians for opera shows. It accommodates more than 20 people with instruments.

Flexible bars are placed above the stage right from the safety curtain to the back of the wall. They are controlled by a pulley system. They hold all the curtains and lights above the stage and other hangings commonly known as flies. We have also had a drencher on stage which is meant to give effects of rain in a show and can as well be used for firefighting on stage.
And finally, within the corridors, we have four dressing rooms, an operations room, a greenroom, and bathrooms. We also have a control room at the back of the audience in the centre where lights and sound is controlled from.