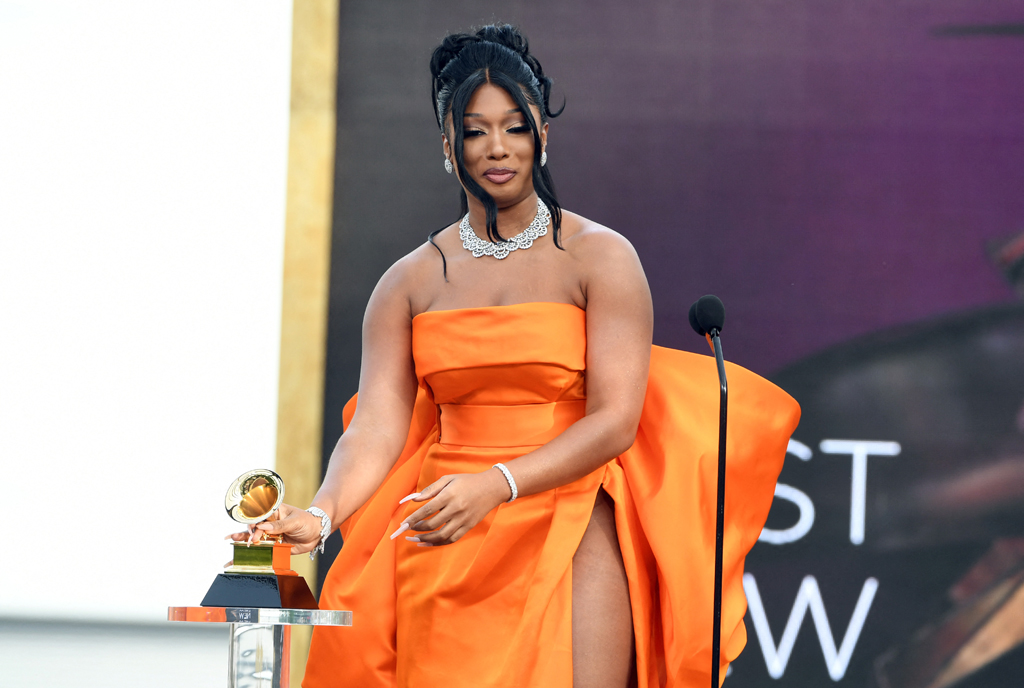 A social media master with a magnetic, Texas-sized personality and razor-sharp flow, Megan Thee Stallion has established herself as a leading member of rap’s vanguard.

The 26-year-old queen of hotties — the name she has flirtatiously bestowed on her devoted fans, having crowned 2019’s steamiest season as “hot girl summer” as she exploded to fame — now has Grammy cred to boot, with three wins on Sunday.

Not that her singular talent ever needed industry backing to soar: the artist born Megan Pete in Houston boasts rare lyrical delivery that’s at once juicy and crisp, simultaneously on lock and off-the-cuff.

The artist behind the TikTok smash “Savage” – which earned her two rap statuettes from the Recording Academy, in addition to the prestigious Best New Artist award — spits out her bars with military precision, creating more pop than even her impressively strong twerks.

She came up on social media but Megan Thee Stallion is every bit a child of old-school hip-hop: her mother Holly Thomas, who rapped under the name Holly-Wood in a south Houston collective, trained her on the genre’s finer points.

Thomas raised her on classic southern hip-hop acts UGK and Three Six Mafia, and managed Megan before her death of cancer in 2019.

“Thank you, Mama, for pushing me and knowing that I was gonna be here,” the rapper said through tears as she accepted her first award of the day, for Best Rap Performance. 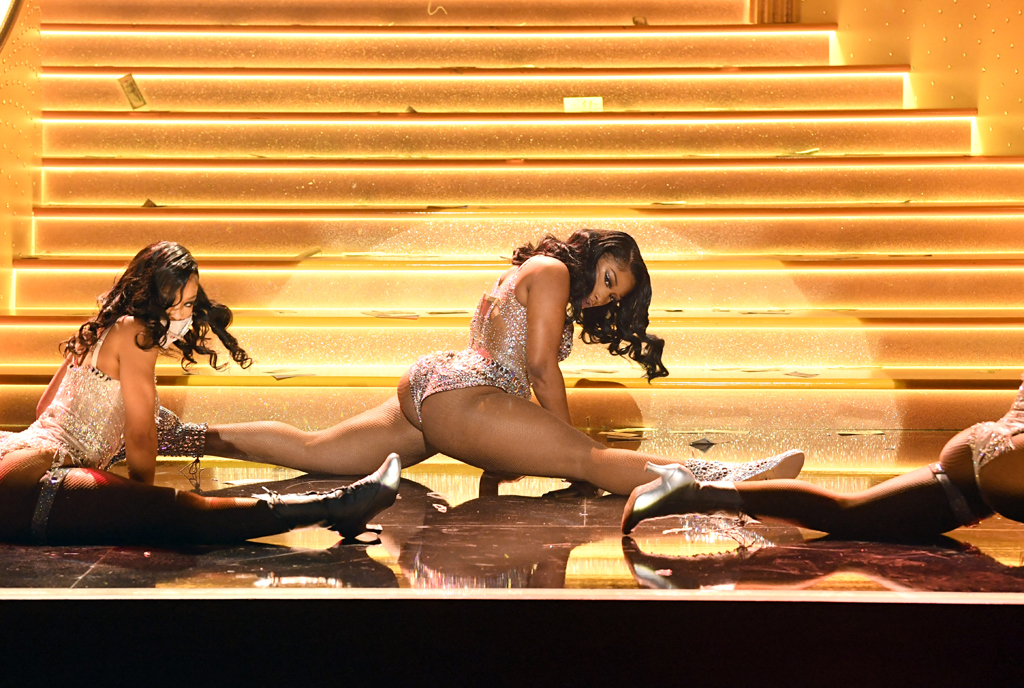 After she began seducing fans on social media with her impressive freestyling skills, in early 2018 Megan released a critically praised EP named for her “raw” alter ego “Tina Snow.”

It was then that she stepped into her persona as Hot Girl Meg, rapping with gusto and technical prowess about the pleasures of being a sexy, powerful woman.

The rising star released her nine-song EP “Suga,” and the single “Savage” started catching fire on TikTok thanks to a dance challenge.

She dropped a “Savage” remix with Beyonce in late April 2020, which became a smash of the year despite its release during the brutal first US wave of the pandemic.

The song became her first chart-topper in the United States.

And anyone who didn’t already know Megan at that point would soon be educated: the rapper appeared alongside Cardi B for their tantalizing summer hit “WAP,” whose name refers to a woman aroused.

The pair electrified the Grammys on Sunday with a sizzling performance — albeit censored — of the bop, capping off their suggestive choreography by scissoring into a flip.

Megan has used her ever-growing platform to speak out against violence against women as well as in support of the Black Lives Matter movement.

Over the summer, she was shot in both feet, which she said the rapper Tory Lanez did following a dispute.

In October, Lanez was charged with felony assault, but in the months prior, a barrage of mistrust and distasteful jokes were aimed at Megan.

“Black women are so unprotected & we hold so many things in to protect the feelings of others w/o considering our own,” she tweeted nearly a week after the shooting, which happened in mid-July. 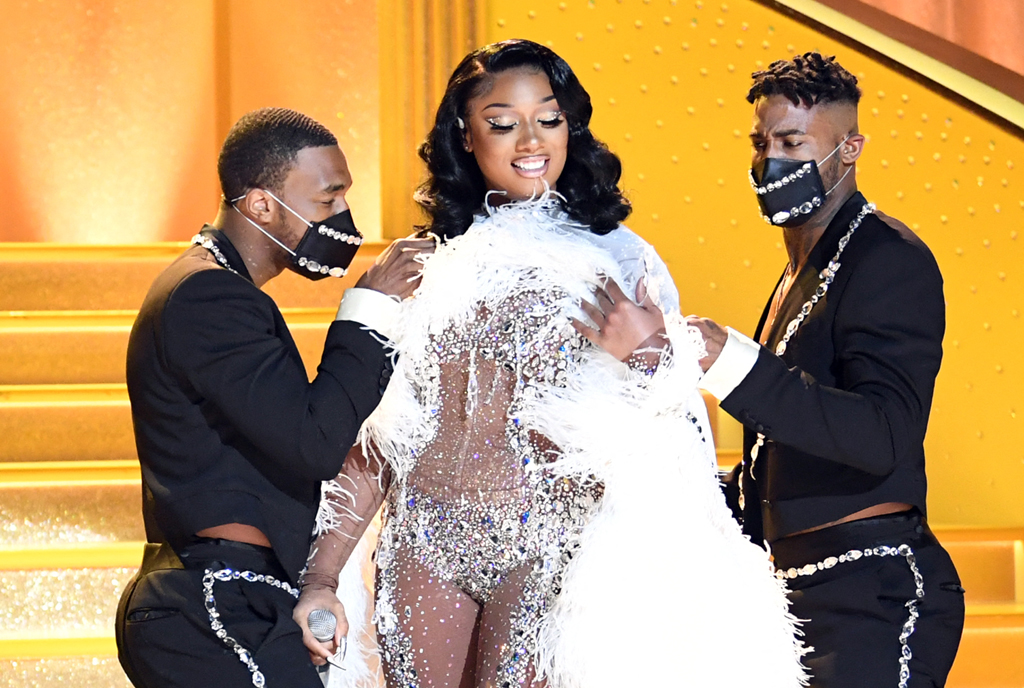 “It might be funny to y’all on the internet and just another messy topic for you to talk about but this is my real life and I’m real life hurt and traumatized.”

Ahead of the November 2020 presidential election, she published a powerful op-ed in The New York Times, detailing her experience of violence and the accusations of lying she faced.

“Too many men treat all women as objects, which helps them to justify inflicting abuse against us when we choose to exercise our own free will,” she wrote.

“The issue is even more intense for Black women, who struggle against stereotypes and are seen as angry or threatening when we try to stand up for ourselves and our sisters.”

Even after the election, Black women would be “likely to go back to fighting for ourselves,” she wrote.

“Because at least for now, that’s all we have.”

Though the weekend’s Grammy wins were her first, Megan Thee Stallion was already racking up awards, snagging a number of trophies at the BET awards and MTV VMAs.

She received a powerhouse award at a Billboard Women in Music ceremony, and made Time’s list of 2020’s most influential people.

And now she’s the first female rapper to win Best New Artist since Lauryn Hill in 1999.

“This is my first time at the Grammys, but it’s not my first time entertaining you,” she told viewers before Sunday’s jaw-dropping performance.

Seasons change – but in the world of Meg, life just keeps getting hotter.