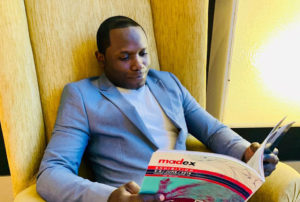 Katsha De’bank is one of the few surviving Ugandan socialites from South Africa. After Ivan Semwanga’s demise, many went missing in action but not Shafique Katumba better known as Katsha. He has remained relevant and he shared with us his journey that probably no one knew about.

Before the expensive cars (Ferraris, Lamboghinis etc) and luxurious life, Katsha was a broke man. He was a high school dropout and didn’t have self-esteem.

“I was broke. Deep in debt and a college dropout, NOT EVEN a college Dropout, I was a high school Dropout. Trust me, no one believed in me. Not even my Self,” he revealed.

But all that disappeared when he started his own business. A business that now employs University graduates. “I only tasted SUCCESS after Launching my one-man Tech Company “Katsche Technology Group” and now it employs more than 200 people. I didn’t go to Makerere University, but most of my workers went to Makerere University. Success is Just an ‘Art’.

The Katsche Technology Group has not only revolutionized the IT sector in South Africa but also created huge impacts on Information Communication Technology for efficient usage of resources across the region.

Besides, the IT Company has not merely reformulated the number of business ideas and principles which were predominant in the business sector for generations but it has altogether changed traditions and business principles.

In this article:Celebrities, featured, featuredpost