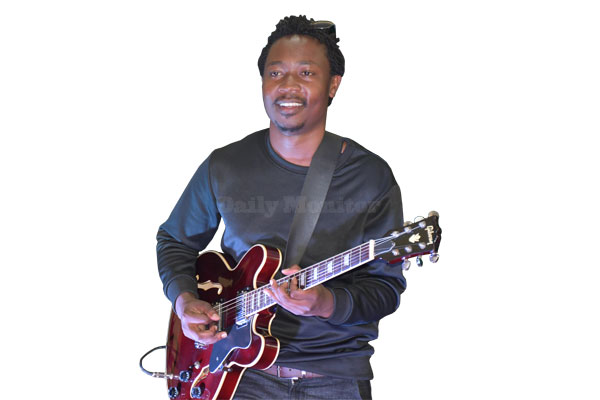 In his latest album, Aloysius Migadde reveals that he is not only blessed vocally but also shows off his versatility with different traditional and modern instruments.PHOTO/NMG.

One of the challenging yet fulfilling milestones of an artiste is outing their maiden album. Musician Aloysius Migadde shares the same feeling for “Eka Ewaffe”, an album through which he connects with his traditional roots as a Ugandan.

The seven-track album is a fusion of traditional and modern instruments with some folklore stories in the songs. The dominant instruments being the guitar, saxophone, trombone, keyboard, bass and drums.

His opening track, “Abaana Bange”, was inspired after watching a play by Furaha Africa whose themes were drawn towards promotion of the historical communal aspects among Africans.

The message in the song later on got a new dimension to Migadde when he lost his mother. When he undertook a course at the Global Music Academy in Ethiopia, the knowledge and exposure as he interacted with other musicians from different parts of the world, enriched his rhythmic patterns too, which came in handy when he settled down to work on the album.

With his guitar, Migadde delivers good tones. Sheeba Mwiza did the vocals on “Abaana Bange”, Lawrence Matovu played the bass guitar and Robert Kibalaba played the xylophone and percussion.
“Migadde did this album depending on the Ugandan culture and folk music. The album is like a storytelling session. It is an album which can be listened to by both the youth and adults. Some of the songs have traditional rhythms from the different regions of Uganda,” Kibalama explains.

Ripe and ready
Jude Mugerwa of Little Penny Studios produced and mastered the song and pretty much the whole album.

“He is a good musician. He has grown. He believes in himself and listens and learns. I implore him to keep working hard, practicing, reading and keep doing music collaborations,” Mugerwa advises.

The other song on the album is “BaxSalsic”, a harmonious conversation of instruments. To enjoy it, you might want to have a dance partner. It borrows from two worlds; Buganda with its pulsing Bakisimba traditional dance and then Salsa.

Migadde says his initial idea was to make an album that is a blend of Bakisimba and popular music genres such as reggae, blues, salsa and jazz. He chose Bakisimba with an objective of appealing to the Ugandan ear.

“I wanted to create something new that a normal person in Uganda can listen to and say, this is Ugandan music. I am looking at a Ugandan sound, so I am starting from the known and fusing it with the unknown.”

“BaxSalsic” was produced by Ronnie Bukenya and mixed and mastered by Mugerwa. Migadde plays the guitar and blows the trumpet on this one while Jimmy Ssenkusu plays the trombone.
Most of the people Migadde works with on “Eka Ewaffe” are either people he went to school with him or met in the ‘gig world’. He adds that he did not have money to pay them.

“He just loves syncopation like any jazz musician, and there is an undeniable signature in his guitar playing technique, from the way he tones it and the way he articulates his notes to imitate the African Ganda tube fiddle with the ggono. This makes him unique and outstanding from the rest of guitarists.

He is talented on top of having a bachelor’s degree in music, which enables him explain everything he does on that fretboard,” Barnabas explains.

Migadde says as artistes, they usually do barter trade of skills. “I play on their projects and they do the same on mine. We have been working together, so they already know the songs.”

“Olusuku Lwa Jajja”speaks to a phase in his life as a boy. He looks forward to shooting a visually representative music video which he also plans to use to tap into the tourism sector by showcasing the uniqueness of Uganda’s art. He makes a call to children of the kingdom of Buganda in ‘Abaana B’embuga’.

“I got those lyrics on the song while playing Jovan Kiyingi’s show. Solomon Kalungi and Sheeba were singing, and that’s how I was inspired. It also comes from a traditional folk song titled

“Akanyoomonyoomo”. “That was my first song on the album,” he explains.

The titles of the songs come from a deep place and identity. He wanted to bring out his pride in Ugandan music as well as a Ugandan identity.

“I just chose Buganda because it is where I come from and I understand the music way from singing with a ‘ggono’ the way Anette Nandujja sings. Plus, I play the traditional instruments.”
“Olugendo”, “Nabisere” and “Endeku Yange” are the other songs on the album. Lex Pro co-produced “Endeku Yange” with Jude Mugerwa. He sees Migadde as an Afrosoul guitarist who rhymes his music with a guitar.

“The concept behind his music is storytelling. Working with him was such a pleasure,” Mugerwa adds. Julius Ssengooba is another of Migadde’s musical friends whose artistic abilities contributed to the album.

“His music is awesome and sweet to the ears and soul. His touch of music is unique because of his versatility of musical instruments such as the tube fiddle, adungu, xylophones and saxophone. His music is mixed with African, western, pop and Arabic techniques, which give it a different sound,” Ssengooba explains.

To that, Bisaso adds, “I got a chance to work on a track with him. The gentleman is gifted! I liked the way he played western style and fused it with our traditional vibe. Great guy, great music.”

George Kitaka, Migadde’s high school teacher describes him as a very talented and enthusiastic musician with versatility at a number of musical instruments.

“As his music teacher for six years at Uganda Martyrs High School Lubaga, I found Aloysius a promising musician, always eager to learn new things. He was a member of all music clubs and would participate in all musical events, within and outside the school,” Kitaka recounts.

He adds that while at school, Migadde was a member of the school brass band, cultural troupe and music club. Migadde’s music is available on online platforms such as Spotify, Deezer and Sound Cloud.