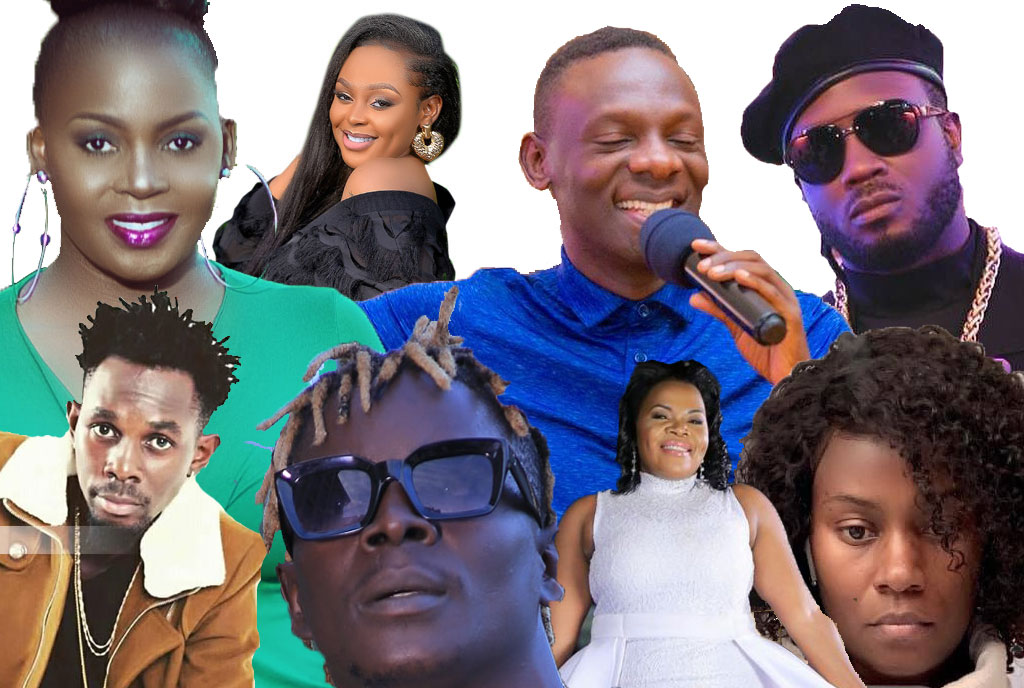 Where are they? Remember “Tubonga Naawe” and all the anger it brought to the fans? Remember that boycott talk and what not? It is five years now since 12 artistes came together in praise of President Museveni. Andrew Kaggwa traces the artistes and what they are up to now.

On Friday October 16, 2015, 12 artistes released a song during an exclusive event at Speke Resort Munyonyo.

This was not an ordinary event, it was an invite-only social gathering that had brought together designers Ras Kasozi, Santa Anzo, Sylvia Owori as well as comedians and media personalities.

According to the invite, the ‘Tubonga Naawe’ experience was going to be graced by the President and those attending were asked to be glamorous with a dash of yellow.

Some artistes showed up and others did not, but that was not the deal. The deal was that a song by 12 artistes was released and on behalf of the art industry, they chose to endorse then candidate Yoweri Kaguta Museveni.

While presenting the song to the President, Juliana Kanyomozi said as artistes, they did this song from the bottom of their hearts and hoped he would appreciate their gift to him.

The President indeed appreciated the song, but the audience had other things on their minds. For that weekend, the artistes were defending their decision, which went on for months and in some cases, years.

After the 2016 elections, there was talk of boycotting the 12 and to date, some people believe some of these artistes were boycotted out of the industry. But were they? We trace the musical journeys of these artistes since the release of “Tubonga Naawe”.

The Gospel artiste burst onto the scene with “Beera Nange” in 2006. Then, she could not even attend a show sponsored by an alcoholic beverage. However, Babirye went on to become that artiste everyone listened to. She sang about mothers, Christ and marriage. But above it all, her gospel music was sung in churches as worship music.

By the time she joined the other 11 to do “Tubonga Naawe”, Babirye had joined politics and was gearing for elections as the Woman MP for Buikwe District.

Babirye joined Parliament in 2016 and unlike many artistes that join politics, she held a few concerts before disappearing, both off the scene and Parliament floor.

Bebe Cool has supported President Museveni longer than many of the people he appeared with on “Tubonga Naawe”. In 2006, Bebe Cool released “Ekisanja”, an album entirely dedicated to drumming up support for the candidate. In 2011, he was still there, just like in 2016. On any other day, we could even have imagined him doing the whole song alone…oh, he actually did an own song for the 2021 elections.

He has been the most controversial in the group, squaring off with his fans trading attacks.

Basically, despite releasing a number of songs, his five years after “Tubonga Naawe” have been more political than musical. On more than one occasion, he has failed to perform when fans chased him off stages in protest. Last year, in the hit of Omah Lay and Tems arrest, he was in the hit of it all as both Ugandan and Nigerian audiences were castigating him.

Nevertheless, Bebe Cool is still with us, with or without memorable music.

Of late, Mun*G is one artiste that will create a hit song whenever he feels like. He had made a career out of slogans until Crysto Panda beat him to it. By the time he made “Tubonga Naawe” with 11 others, he simply had a stable career, many hits and many flopped shows alike. He continued releasing those three-week-shelf life songs.

If there was one thing “Tubonga Naawe” did for Rema, it was reuniting her with Bebe Cool. However, that did not last long. Rema was enjoying a stellar career before the project. Yet, even when her audience hated the fact that she was part of the song, she has achieved more than any person being boycotted can. Rema landed endorsement deals with Hema Water and Jesa milk on top of two sold out concerts.

Then, King Saha was still trying to establish himself on the local scene. He had a string of successful songs such as “Mulirwana”, “Bbera Awo”, “Abantu Baffe” and “Gundeze”, among others. After the elections of 2016, King Saha seemed to slow down, however, he later picked up with the release of “Mwana Gwe”. He has since graced Coke Studio Africa’s stage as well as staging his own concerts, plus continuing to release club bangers. It would be so hard to claim that his career was in any way affected by the boycott claims. Politically, King Saha was a strong supporter of Bobi Wine’s parliamentary candidacy nearly two years after this project.

She was one of the artistes that defined the early 2000s of Uganda’s music industry. This was a class of artistes Bebe Cool, Chameleone, Juliana or Bobi Wine. Their names are bigger than their music that even without a particular song on a radio chart, they are always sought after. Before “Tubonga Naawe”, it is hard to say Namubiru was at the top of her game. By 2016, she had nothing that Ugandans would boycott. Nevertheless, she has not been completely out, she released two albums in 2020; “Mpulira” and “Let’s Go Acoustic”, an acoustic collection of her older songs.

It is hard to claim Haruna Mubiru was at the top of his game by the time he was part of Tubonga Naawe. He had enjoyed occasional famous songs but there is nothing to prove that he would be miles ahead, had he not been part of “Tubonga Naawe”.

Like Iryn Namubiru, Juliana was not at her best by the time she featured on “Tubonga Naawe”. But she was still an influential figure and an inspiration to almost all upcoming female artistes. The last time Juliana made news was with the release of her “I’m Still Here” video, whose similarities with J’Lo’s “Ain’t Your Mama” got the internet talking. Then again last year with the birth of her son.

Radio and Weasel had their best years behind them by the time they joined the Tubonga Naawe crew. But they were not out, they had a string of good projects such as “Don’t Cry” with WizKid, “Bikoola” alongside Irene Ntale and “Omwana Wabandi”. The duo held a concert that was poorly attended after the elections, however, there is no proof this was because of the boycott.

In 2018, Radio died after sustaining head injuries at a bar in Entebbe. There has been so little happening in the musical life of Weasel even when he has been releasing music.

Pr Wilson Bugembe must have been brought to the project to bring a religious point of view. He was a famous and at times controversial pastor at the time but not a top artiste. And he has never stopped being exactly that, at the end of 2018, he was still involved in another political song, “Tuliyambala Engule”. Two days after the video release, he apologised for being on the song, saying he did not know what the song was about. He was last seen at State House folding his hands while the rest of his pastor colleagues were praying for presidential candidate Tibuhaburwa.

Before “Tubonga Naawe”, Jose Chameleone and Bebe Cool were not the best of friends. The project brought them together, kept them together, and they toured TVs together defending their decision. Until Bobi Wine’s political ambitions happened. Bobi Wine made every artiste feel like they could bulldoze their way into power. One of the people influenced was Chameleone. In the five years after the song landed, he has gone from campaigning for the President, to joining the Democratic Party, National Unity Platform, back to the Democratic Party and later an independent. He was a mayoral candidate in the just-concluded elections. And oh, he wasn’t affected by a boycott, he’s Jose Chameleone as in the Chameleone.