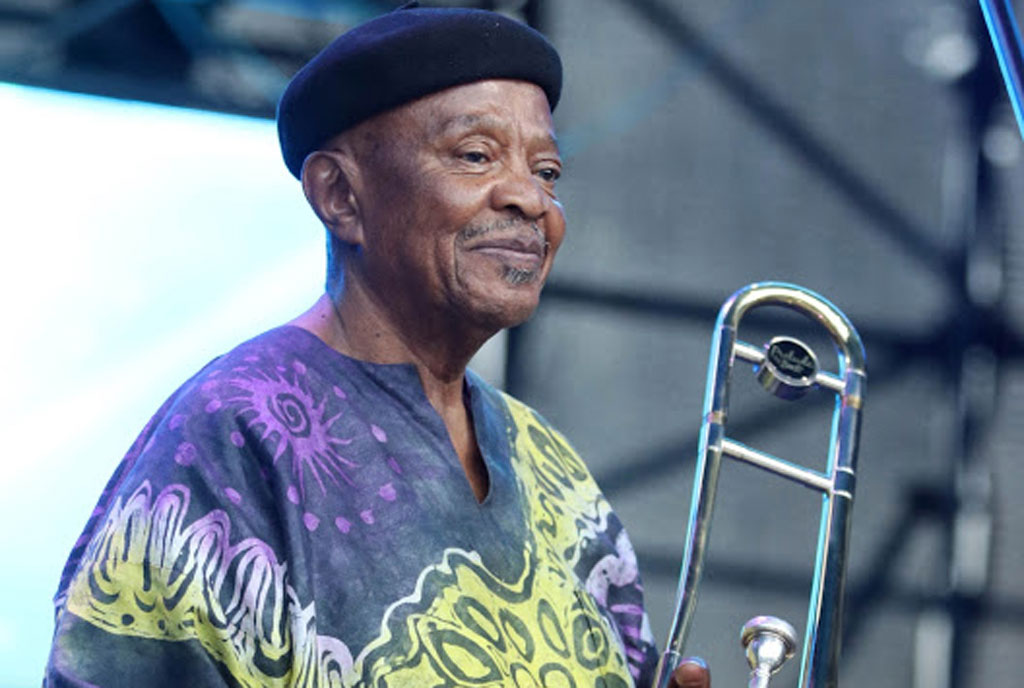 Fare thee well. The South African trombonist and composer Jonas Gwangwa, 83, was an ambassador for his country’s music and an advocate against apartheid. He died on January 23, the same date (but in 2018) that his cousin Hugh Masekela also passed on, writes Sam Mathe.

A giant of our revolutionary cultural movement and our democratic creative industries has been called to rest; the trombone that boomed with boldness and bravery, and equally warmed our hearts with mellow melody has lost its life force. Jonas Gwangwa ascends to our great orchestra of musical ancestors whose creative genius and dedication to the freedom of all South Africans inspired millions in our country and mobilised the international community against the apartheid system.

A professional performer for seven decades, three of them were spent in exile where he demonstrated remarkable courage and resilience as one of the expatriates who kept the flame of SA music alive through their unique brand of mbaqanga and township jazz.

It was therefore no coincidence when in 1979 then ANC president Oliver Tambo commissioned Gwangwa to form a cultural ensemble that would make the world aware of the injustices of apartheid through musical performance. The leadership of the anti-apartheid movement in exile, and Tambo in particular, was aware of the power of the arts in fighting the unjust political climate at home. The late ANC president had taught at St Peters in Rosettenville – a white working class suburb south of Johannesburg.
Father Trevor Huddleston, the principal of the Anglican boarding school for African boys, another prominent anti-apartheid activist, understood the conscientising role of culture in the liberation Struggle. As a pupil at St Peters alongside his cousin, Hugh Masekela, he was politically influenced by both Tambo and Huddleston, a well-loved cleric among the people of Sophiatown where his ministry was based for 13 years as priest at the Christ the King Anglican Church.

So when Gwangwa was commissioned to establish an ensemble for the expressed purpose of spreading awareness about apartheid across the world, he accepted it with the necessary dedication. The result was the formation of the ANC’s Amandla Cultural Ensemble in 1980 in Angola. He served as the outfit’s musical director, principal composer and arranger.

Family influence
Arguably the greatest trombone player to have come out of the African continent, Gwangwa was born in Orlando East, Soweto, on October 19, 1937 in a family of pianists. Both parents and a sister were proficient players.
His father, Wilson Gwangwa, taught at the famous Orlando High School. He was also a skilled carpenter who specialised in cabinet making for families in his Soweto neighbourhood. His mother, Sophie Gwangwa (nee Lebelo), was a seamstress and a housewife who raised four children.

Both parents were of northern Ndebele stock who traced part of their ancestry in Limpopo. He pays tribute to his roots in Ga-Mashashane, a composition from his 1999 album A Temporary Inconvenience. The song title is derived from a village of the same name situated outside Polokwane and regarded as the Gwangwas’ ancestral home. Although their language is not officially recognised by the SA government, the late artist has championed its preservation and survival in some of his compositions, notably Letuba Lami (My Dove) – from his last album released in 2008, Kukude (Lapho Sivela Khona).

Budding passion
In his boyhood, his parents exposed him to the marabi music of pioneers Griffiths Motsieloa and Peter Rezant’s Merry Blackbirds. He idolised Kippie Moeketsi and Mackay Davashe, two of the leading lights during township jazz’s golden era in the 1950s. They were exceptional clarinet players who went on to become great composers as well as masterful alto and tenor saxophonists respectively. His favourite instrument was a clarinet, but when the Huddleston Jazz Band was formed at St Peters, Father Huddleston gave him a trombone because that’s what he could get from some good Samaritan at the time.

It was an awkward monstrosity for the teenager but as he later explained: “I accepted it because I didn’t want him to think that I was ungrateful or afraid of a challenge. I grew up to love and appreciate the instrument.”
He was raised in an environment where Glenn Miller-type brass bands were mushrooming all over as part of street entertainment in the 1950s. And although the trombone was a favourite instrument with big bands, Gwangwa has distinguished himself as the first local musician to play it in small combos.

The Huddleston Jazz Band included fellow students Zakes Mokae (sax), Stompie Manana (trumpet) and Masekela – who inspired its formation when he requested a trumpet from Huddleston. However, Gwangwa took credit for the band’s name after being declared the winner of the naming contest. Although this was an ensemble of schoolboys, they would soon establish a reputation as virtuosic and classy players who could hold their own against established pros.

The big time came with Davashe’s Jazz Dazzlers and Jazz Epistles where he played with jazz royalty – leader Moeketsi (alto sax), Makhaya Ntshoko (drums), Dollar Brand (piano), Johnny Gertze (bass) and Masekela (trumpet). They were the first SA band to release a jazz LP, Jazz Epistles – Verse 1 (1960). Unfortunately with Sharpeville, the state of emergency and banning of liberation movements, it became impossible to keep the outfit together.

A sextet was by definition a violation of state of emergency regulations. Masekela was the first to go into exile. Gwangwa followed in 1961 during the King Kong production’s London tour and went on to distinguish himself on international stages as a member of the exile community in Britain, the US and Botswana.
On arrival in New York, he enrolled at the Manhattan School of Music. One of his high-profile performances in those years was in 1965 at Carnegie Hall alongside fellow expatriates Miriam Makeba, Letta Mbulu and Caiphus Semenya.

Another highlight was producing Makeba and Harry Belafonte’s An Evening With Harry Belafonte (1964), the first album to win a Grammy Award for the African continent. In 1970 Gwangwa, Semenya and Masekela formed a jazz combo named the Union of South Africa. Their album, Hugh Masekela & the Union of South Africa, was released in 1971 under Masekela’s Chisa label. It showcases the music of their township upbringing and caused an immediate sensation among music lovers in the West.

Highlights
• Gwangwa made the score and theme song for Richard Attenborough’s film Cry Freedom (1988), based on journalist Donald Woods’ friendship with Steve Biko. The score, which he created with George Fenton, earned him several achievements, notably two Oscar nominations.
• He did the first theme song for the TV soapie Generations.

In this article:Celebrities, entertainment, featuredpost