The making of the king herself

BOOM PARTY: Too many queens in the business that is why she call herself the king…that is Cindy and tomorrow as she looks forward to making possible history as the first female artiste to hold a concert at Lugogo Cricket Oval, Andrew Kaggwa chronicles her journey to the top.

Towards the end of 2018, Cinderella Sanyu alias Cindy, was one of the many Ugandans nominated for the African Magic Viewers’ Choice Awards. It was not a nomination for her contribution as an artiste to a film but as an actress.

This was for her role as Bella in Matt Bish’s film of the same title. In the film, the singer and songwriter portrayed a young disadvantaged girl that harboured dreams of becoming a recording artiste and how far she was willing to go to make it happen.

The nomination was a big thing for Cindy and her career that was taking yet another direction but the biggest moment was not the fact that it was happening, but when it was happening.

At the time, Cindy had been active on Uganda’s entertainment scene for 15 years, 12 as a solo artiste.

Cindy started out in the local industry through a talent search – Capital FM’s Real Stars. The radio singing contest was the first of its kind and had brought together talents such as Dorothy Bukirwa, Tony, Sarah Zawedde, Cindy and Kefa Mwesigwa the eventual winner.

Before his death, Kefa Mwesigwa had blessed Ugandans with Better Man, Get With You alongside Navio as well as Dance Carolina with Mr Mosh.

But Ugandans had found a liking for Cindy and so did one of the judges, Steve Jean. In one of the interviews, she notes that it was Steve that told her about the Coca Cola Pop Star search and encouraged her to audition.

The televised talent search worked in her favour, she had a song playing on radio but above all, unlike most of the contestants the show met, her story was relatable.

It was a continental connected show that was coming at the heels of a very successful Big Brother Africa show. It had contestants from Kenya, Tanzania, Uganda and South Africa, among others.

The Ugandan audition took place at Speke Resort Munyonyo and among those that auditioned was Cindy. She impressed in the audition, but also had the advantage of the fact that Mawadri and Steve Jean knew her strength.

But among those that were impressed with her audition, was Zwai Bala; he’s the oldest of the singing South African Bala brothers that include Loyiso Bala and Phelo Bala. Even when Cindy did not impress in the later stages of the show, Zwai would refer to her showcases in the earlier stages of the show to make a case for her.

Eventually, Cindy, Jackie Chandiru and Lillian Mbabazi were unveiled as Uganda’s pop stars in the trio Blu3. Other groups were Wakilisha from Tanzania, Sema from Kenya and Ghetto Lingo from South Africa.

Much as many of the groups had disbanded before the end of 2005, Blu3 managed to release two albums; Hitaji and Burrn. The group did not disband but in 2008, Cindy left or was fired and she pursued a solo career.

The story was that Cindy absconded from work to be with her then Spanish boyfriend. But the story took lots of turns with all sides telling a different story.

“Looking back, 12 years as a solo artiste have been a mixed bag,” she says.

Cindy launched her solo career with the single Mbikoye in July 2008, receiving commendable airplay but notes that she was not over the separation from Blu3.

She had since been replaced by dancer Mya Baganda who ended up singing her verses on their shows. But while she was picking up pieces, tragedy struck when she woke up to nude pictures in a tabloid.

“I was starting out as a solo artiste when my nude pictures were published. It was the first time this was happening to a female artiste,” she says.

Her other singles such as Nawewe were too moderately received: “I had been in a group setting where many of our decisions were made by a management,” she says, adding, “with a solo career, I was trying to understand myself and brand thus tried out many things.”

But dancehall was never one of those genres. In fact, it took someone’s influence for Cindy to try out something different from what she had been doing with Blu3. Mikie Wine.

“Mikie Wine called me to do Number One with him,” she says, adding that she had never believed she could do anything close to dancehall but went to studio with him regardless.

She says it was with that collaboration that she found herself, taking a different direction with her career. She would later drop Ayokyayokya, a song many credit for making the Cindy people know today.

Since then, she has released songs such as Selecta, Mateka, One and Only, Mungu Bwasalawo, Sample Dat and Still Standing. On the way, she has also scored collaborations with P-Square, Mr G, Wahu, Nyanda and Dufla Digon.

Cindy has created a brand around the genre that only a few women have dared try and managed to successfully fit in with the men, but that was not all. She went all live.

“When I gave birth to baby Amani, her father gave me a music kit as a gift,” she says.

With this, she says she rehearsed with a band for more than six months before eventually staging her first performance. The problem though was that no one was ready to see her perform with a band.

Today, Band Cindy is one of the things that define the singer. She graces different stages almost on a weekly basis doing her songs and at times other people’s songs.

Over time, some of her covers such as John Blaq’s Tukwatagane and Sheebah’s Beera Nange have gone viral. For John Blaq’s, it was because she may have done it live even before the owner while for Sheebah, it was because there were rumours of a brewing fight between her and the latter.

“I think our music was at war before we even had anything going on between us,” she said, adding that many times when people would talk about female artistes, their names were usually thrown around.

When Cindy took on the moniker ‘King Herself’, it was because ‘the industry had many people claiming to be queens’, Sheebah was going by the title ‘queen’ at the time.

Sometime last year, the singer advised Sheebah to work hard to deliver better live performances. Spited by the dig, Sheebah reacted by talking about her achievements that included her house in Munyonyo.

“When I did Copycat, I did not think people were going to like it, let alone it getting airplay,” she says, adding that at the time, men had viciously attacked each other and it was hard to imagine Ugandans would welcome the same, coming from women.

Sheebah responded with two songs; Kimansulo and Jealousy. There was a battle for the two in the making until Sheebah’s management asked for a billion shillings to perform.

It was at this time that Cindy also dropped her Boom Party hit, and as they say, the rest of 2019 is history.

“At the moment, Sheebah and I do not have any sort of relationship, but we are not fighting. We just have not met.” 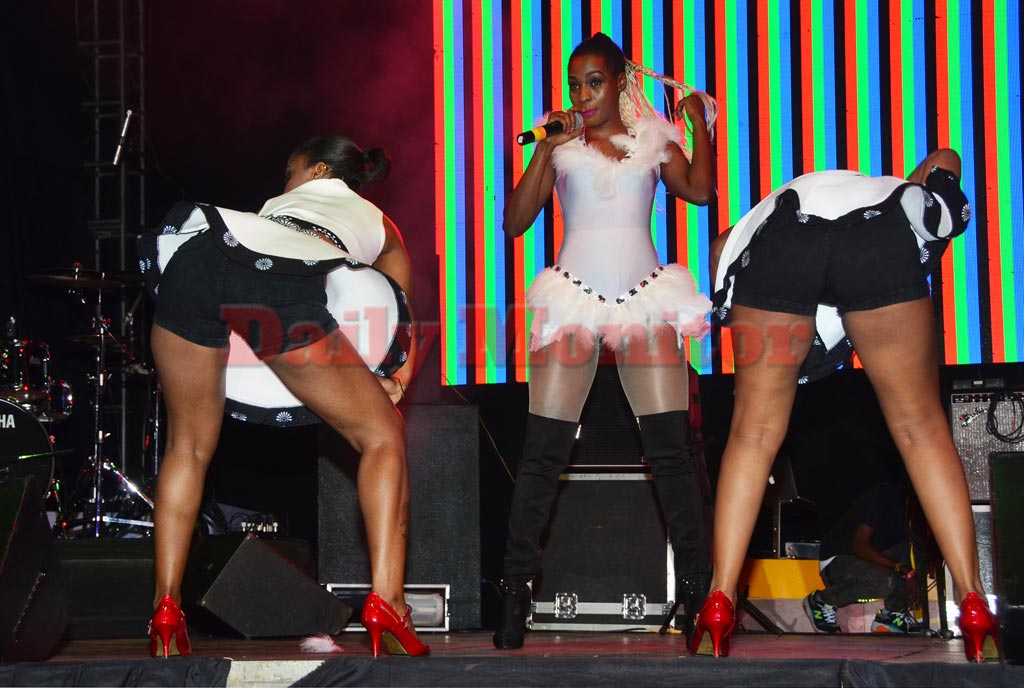 Tomorrow, Cindy will be holding her third concert in her solo career at Lugogo Cricket Oval. The show aptly titled Boom Party according to Cindy, is her way of breaking the ice in many ways. It is a show celebrating her journey from Blu*3 to 2020 but above it all, conquering a new territory.

“In the past, I have seen international and male artistes stage concerts at the Cricket Oval, but not a female,” she says.

“With this show, we are breaking into a new ground to show people that the Cricket Oval is for us all. Who knows, maybe another female artiste will dare the venue after Saturday.”

She says the show will celebrate the different elements of her history.

“I badly wanted to have Jackie at this show but it is hard.”

She, however, noted that she will walk the journey with most of the people that have been part of her career, including the different sets of dancers she has worked with over the years.

Of course, she has worked with a number of international artistes but she says none of them will be on stage because it will be a local affair. So, will Bobi Wine attend?

“He’s an upcoming president, he’s hard to get but if he is around and wants to jump on stage and perform Dilemma, we shall perform.”