The memories that will not go away 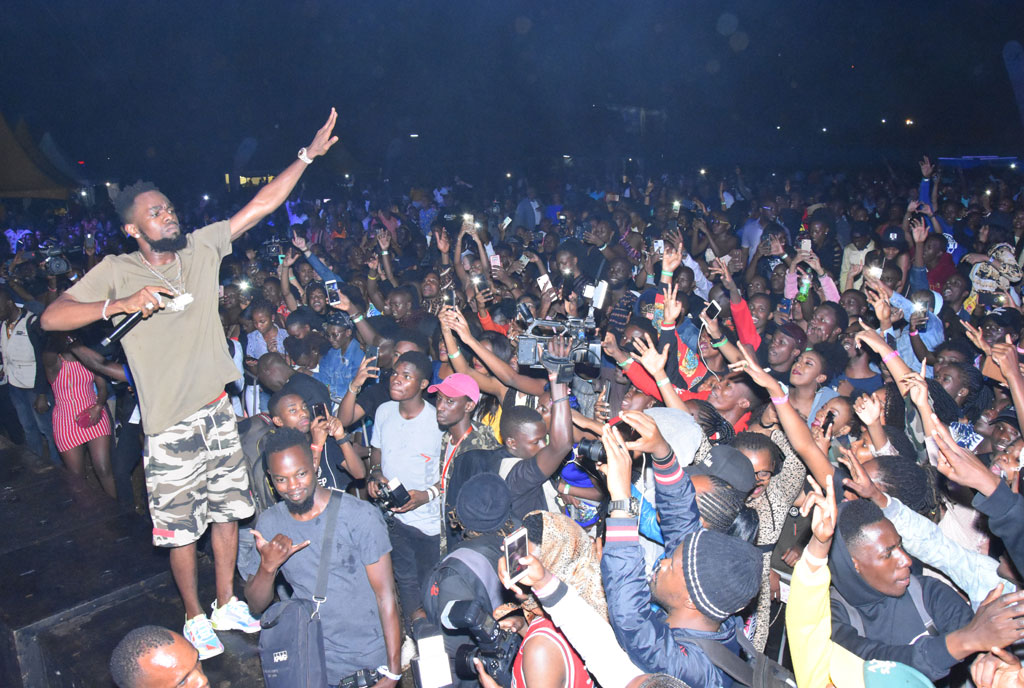 Despite low turn up, Patoranking gave his best. PHOTO BY MICHAEL KAKUMIRIZI

INVADED: Over the past years, the increased presence of Nigerian content has been a topic from Ghana to Kenya. In Uganda artistes even created initiatives to curb the vice, yet we still end up with more content from the West, Andrew Kaggwa writes.

As you read this, you may not be aware that January 2020 has not been like the other Januarys you have experienced.

For instance, even when it is a norm for show promoters to avoid concerts or theme parties, January 2020 was an exception. This year started on a roll with leftover parties from 2019 taking up some of the first days of the year.

Among these was Ketchup’s publicised gig at Club Guvnor.

Famous for songs such as Pam Pam, She Issa Flirt, Ketchup was the fourth Nigerian artiste to grace a Ugandan stage since December 20, 2019. That year had seen a string of Nigerian artistes, famous and obscure grace the local stage.

To put it in numbers, the year opened with Davido, sliding into WizKid, Burna Boy, Nonso Amadi, Joeboy, Rema, Skales, Patoranking, Ycee, Mayorkun and King Perryy, among others.

And that number excludes acts such as Jidenna and Ms Banks who we shall consider American and English respectively, or Gospel sensations David Ekene and Sinach. The latter was a no show though.

The topic of Nigerians taking over local music or the entertainment industry is one that has been coming up in phases.

For instance, in 2014, Bebe Cool had taken on DJs for prioritising Nigerians over Ugandan content.

Then in 2017 after Nigerian sensations Tekno and Mr Eazi’s Kampala concert, most Ugandans thought it was a raw deal. Especially considering the fact that the two artistes put up such lacklustre performances.

A local artiste had even taken to social media to taunt both sponsors and promoters for prioritising upcoming Nigerian artistes at the expense of Ugandans.

In fact this could have activated the second campaign by Ugandan artistes trying to save their music from being dominated by West Africa. Later, the target changed to all foreign content.

During a show at Kololo Independence Grounds, rapper Gereson Wabuyi, alias Gravity Omutujju, lashed out at Kampala Capital City Authority organisers for launching their carnival with a Tanzanian artiste as a headliner.

Diamond Platinumz was the artiste in question, who was in Kampala for his third time but performing for the second time.

In 2019, the number of Nigerians hitting the Ugandan stage may have increased, but so did the number of other foreign acts that showed up; some were not even coming for real shows but club and theme parties.

For instance, at least 13 Nigerian artistes performed in Uganda in 2019 but on top of them were Kenyan and Tanzanian artistes, and still this is without Jamaican and American acts.

Brands do not care

A radio presenter, who requests anonymity, says Ugandan products lack caring brand managers. He says most of them lack the knowledge of the local entertainment establishment.

“Whenever they think of starting a campaign for their products, the first thing that comes to their mind is a Nigerian artiste,” he says.

Some of these brands, he says, do a lot of activations on the party scene but none of these have been headlined by a local artiste.

Some have even argued that maybe these brands have different target audiences that cannot be appealed to using local artistes: “then why are they doing business in Uganda?”

Radio personality and DJ Williams Mukisa Sserwadda, alias Selector Williams, says beyond everything, technology advancement has contributed to the increase of foreign music on the airwaves and eventually concerts.

“Unlike the past, today, Ugandans have vast avenues to access music. Look at all these streaming sites and YouTube,” he says.

He notes that with all these avenues, a person can easily curate what they want to listen to for a full day and just like that they will sway promoters.

“Have you gone to these events? They will bring a Nigerian artiste you do not know and yet for some reason, there is an audience that sings along to all his songs.”

Music is not good enough

But Sserwadda also notes that Ugandan artistes have some blame, for example that they have been out of ideas for a long time.

He says when you look at the Nigerian music taking over Ugandan airwaves, it has some sort of story and originality to it.

“When an artiste like Diamond releases a song, his fusion of Bongo with traditional Tanzanian sounds like Teraab get his people to connect with the music since they connect with it and Ugandans love it because it is unique,” he says.

Most local artistes, according to him, have failed to find something Ugandans can connect with as far as the music is concerned since one day they will be emulating Jamaicans and the next day it will be Nigerians.

“Ugandans have to be original, it does not mean that their sound will be bad but we should remember Uganda has famous styles that can be turned into pop,” he says, adding that if someone does music with only a purpose of becoming international, they will fail.

Making matters worse, today many local artistes have travelled and recorded songs with Nigerians, which in some of the cases, these songs have worked for the Nigerians in Uganda than they have for Ugandans in Nigeria.

Sserwadda also says some songs simply have a wonderful beat with nothing to take out of the lyrics; “The good songs that had some sort of message were done in 2008,” he says, referencing to Radio and Weasel’s Nyambura and Nyumbani.

Artistes don’t get the love

Some music enthusiasts seem to disagree, for instance, even while Simon Mukisa agrees that local music from 2008 had more passion and seemed more structured, he notes that DJs rarely showed enough enthusiasm to support it.

“Today, you will see a person that worked at Sanyu FM in the 2000s saying local music in the 2000s was better yet they did not play it at all,” he says.

Of course Mukisa is right to an extent. For instance, in 2004, Touch FM was set up as a station that prioritised a music genre, rock and roll, yet they fused their playlists with everything such as Afro-beat, rumba, reggae to soukous.

However, even when Ugandans performed music within those genres, they never got on Touch FM’s playlists, the same catalogue that always had Davido, Bracket and D’banj, among others.

“That radio was very comfortable playing Yori Yori but not Radio and Weasel’s Can’t Let You Go,” he says, adding: “You wonder why they found the need to raise the bar higher for local artistes.”

When both Jose Chameleone and Bebe Cool raised their voices about the increased number of Nigerian songs on the airwaves, most DJs were quick to call the two sore losers that needed to get back to the drawing board.

Yet in an interview that year, James Mugume, alias DJ Aludah, noted that Bebe Cool actually had a point.

“DJs are not giving Ugandan music a second listen. They are too quick to judge.”

But he also noted that as DJs, they are not promoters but make audiences happy, and in that case they are not to blame if an artiste did not promote their song or did a bad job.

“You cannot blame a newspaper vendor for mistakes done by a journalist.”

In 2019, at the launch of the Quadrennial Periodic Reporting on the Unesco 2005 Convention on the Protection of Diversity of Cultural Expressions at Imperial Royale, one of the questions raised included whether there is a policy towards the protection of artistes.

For instance, it was noted that even when traders easily take their goods across the East African region, art has not benefited in the same way.

For example, even with all the rosy things they have said about the East African Community, Ugandan artistes still pay big amounts for work permits in Tanzania.

Sserwadda says the lack of a sensible policy or a body that works for the creative economy has left local music toothless: “For example, we have a copyright law without a body to enforce it.”

Earlier, the Uganda Communication Commission had been committed to promoting and enforcing 70 per cent of the content broadcast on Ugandan platforms to be local.

But in the same vein, Sserwadda says pay TVs have the liberty to carry so many foreign channels where Ugandans at times access much of the foreign content.

For instance, different pay TVs in Uganda carry channels from Nigeria yet on the flip of it, the same platforms do not broadcast Ugandan channels in Nigeria.

What should be done

He says most Ugandan artistes will host a concert but fail to own it by inviting a big number of supporting artistes that at the end of the day a fan will not get value for money from the artiste they came to see.

According to him, Ugandans are competing with Nigerians that know what it means to keep time, deliver a well-choreographed act and showcase with a wow factor.

“Most of our artistes are weak in choreography and are not rehearsing enough, their showcases are the same that in the face of a rehearsed Nigerian, they will stand no chance.”

Sserwadda says artistes need to show some love to local media houses that even when it is the responsibility of media to priotise local content, they are still doing business.

“Artistes will take a screenshot and share pictures of themselves in Nigerian media but will never do the same for local newspapers or TVs,” he says, noting that artistes need to support local media to get the love back.

Most of our artistes are weak in choreography and are not rehearsing enough, their showcases are the same that in the face of a rehearsed Nigerian, they will stand no chance