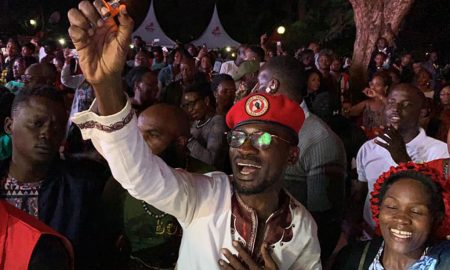 Why singer Bobi Wine was named male politician of the year

Just days after his baby mama got married to another man in a traditional ceremony, seems singer Eddy Kenzo’s woes are far from over.

In an audio recording that has since gone viral, AK47’s widow Nalongo Maggie Kiweesi, who has been dating Grenade Official real name Deus Ndugwa claims she has video evidence of Kenzo, Grenade and Tanzanian singer Harmonize having sex.

Her allegations are based on a Dubai trip for the One Africa Music Fest on which the Big Talent Entertainment boss took Grenade along two weeks ago with the aim of introducing him to the global stage.

Harmonize was part of the East African musicians who took part in the fest.

However, Kenzo, real name Edrisah Musuuza vehemently denies the allegations and has vowed to take legal action against Nalongo, who’s rumoured to have broken up with Grenade, and any other person trying to tarnish his image.

According to Kenzo, his woes started as soon as he released his ‘System Volongoto’ song mid this year.

The song launches a searing attack on the government, as the singer uses parables to paint a picture of a paralysed and fraudulent government whose corruption has reached eye-watering levels.

In the song, Kenzo further sings about Uganda being a place where children are starving, yet nobody seems to care. He also highlights the plight of Ugandans who are not seeing any wage growth.

“You all know that ever since I released that song, I have been faced with a lot of challenges, including separation with my baby mama. However, I want to say that although I haven’t personally listened to the audio, some friends have contacted me briefing me on the content. In that hotel, we were a bid crew, including my manager and DJ. Besides, Harmonize spent a night in another hotel. We only interacted on the stage. My lawyers are finalising on paperwork to take action against Nalongo,” Kenzo told journalists in Salaama, Kampala on Saturday.

According to Kenzo, some people are simply riding on his popularity to make their point.

“I’m not the first person or singer to be accused of such. Even the late Michael Jackson also used to face such accusations.  I cannot just stop working because my haters want to see me down. I have children and other people I take care of,” Kenzo adds in an interview posted by vlog WOLOKOSO Mu Ug Extra.