Kabarole Woman MP Sylvia Rwabwogo on Friday presented to court what she said text messages that Mr Brian Isiko, 25, sent to her phone, prompting her to report cases of cyber harassment and offensive communication.

Mr Isiko was in July convicted by a magistrate’s court on what was taken as his own plea of guilty and sentenced to two years in jail, a decision that touched off a public uproar and on appeal to the High Court, the judgment was quashed and a retrial was ordered.

During a retrial session on Friday, Buganda Road Court Chief Magistrate’s Court heard that Mr Isiko has continued to send similar messages to Ms Rwobwogo in what the prosecution said is a violation of the orders handed down by the High Court.
Mr Isiko’s lawyers, however, argued that the prosecution should not bring up new evidence because what they are supposed to go through is a retrial based on the evidence collected earlier and not a fresh trial.

In her evidence-in-chief before court, Ms Rwabwogo said she was provoked to report the matter because, as a ‘psychologist who studied how the human mind works’, she felt, judging by Mr Isiko’s messages, that he was bound to either harm her or himself.

“If someone says he can die for his country that is understandable. But, if someone claims they can kill for love then I cannot take that lightly,” Ms Rwabwogo said.

Prosecution alleges that between the months of November 2017 and June 2018, Mr Isiko used a computer to make love requests, suggestions or proposals which were obscene, rude, lustful or indecent to the person of Ms Rwabwogo.

It adds that Mr Isiko willfully and repeatedly used electronic communication through SMS messages or attempted to disturb the peace and quiet enjoyment or right to privacy of Ms Rwabwogo with no purpose of legitimate communication.
The trial before Ms Stella Amabilis is set to continue on November 27.

The text messages
Below are some of the text messages that Ms Rwabwogo said Mr Isiko sent to her:
“I can give my life for my country. But also I can take a life for love. Even a thousand men and more, I would battle. I would fight for you.”

“Good morning baby Angel. If love is a crime tell me on whose sword I should put my head to. If being in love is a mistake, you advise me because you care for me.”

“If I can’t apologize for being wrong, then it’s just a shame on me. I will be reason for your pain.”
“I apologize for making you hurt for the things that haven’t occurred yet if you are to blame.Please put all the blame on me.I ask for forgiveness.”

“Hello, how are you doing my angel, my one and only. You only one that I am missing. You bring me joy and blessing. You know that I love you. And I can’t wait to say ‘I do’”

“Good morning Princess! Love is not reasonable, love just happens without any reason. We are born multiple times sometimes as husband and wife, sometimes as lovers and sometimes as strangers. But in the end we definitely meet.”

“Give your life to me because my heart is yours. Sacrifice your pride for me because I can perish in your love. I love you little angel.”

“In my prayers, in my wishes, in my silence, in my voice, only you are there, only you. You special to me baby Sylvia!”

“Your smile creates a lot of pain in a man. If the stars see you then they will ask for light, and thirsty will ask for clouds from your hair. Don’t let the scarf slide from your shoulders, otherwise even the old will pray and ask for youth.”

“I am made from your love first I was alive now I am living.Me forgetting you will is never going to happen and you fighting for me, I won’t let that happen.”

“I don’t know what quality is there that I don’t see in others. What attraction is there in those eyes that I can’t take my eyes off it. What is that keeps me worried all the time.What is that can’t erase with imagination.”

“Do you know why you blocked me from calling you! It’s because when the heart is talking to a heart, then the lips must remain quiet.”

“If I was blind then I would not have seen the most beautiful thing in the world. You! Not only have I buried your name on my body, but also in my heart, in my mind and in my soul.Now no one can stop me from loving you, not even you. Gdngt Angel Sylvia!”

“Gdmrng Baby Angel. But I’m not like you, I can’t live without saying I love you. Remember, we’re born once, live once, die once and also love happens once.”

“Baby Angel! My heart is mine but whenever I argue with it takes your side. I love you little Sylvia.”

“Into two as it happens in the relationship of others only my right is there on it. There is one voice that keeps echoing in ears, there is one face that keeps coming in front of me every time, you the peace of my heart. This life was going on but, I started living the day you came in my life. I’ve memorized you like a holy verse from the bible, now you will be mentioned like a prayer.”

“I apologise for calling you frequently. But I was worried so I had wanted to check on you. I care for you more than I care for myself. And after your parents and kids I am in the second position of love.” 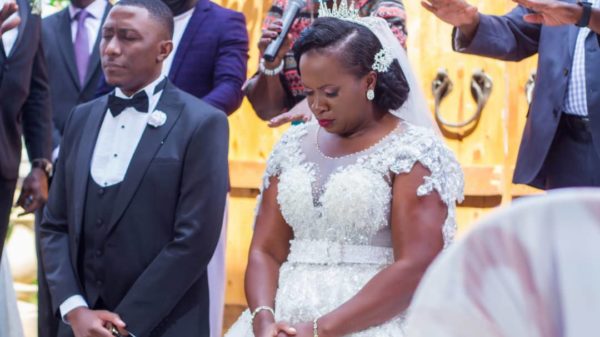 Raise your glasses people! It is a celebration in the Roger Mugisha household. News reaching sQoop Desk indicates that the Sanyu FM head of...