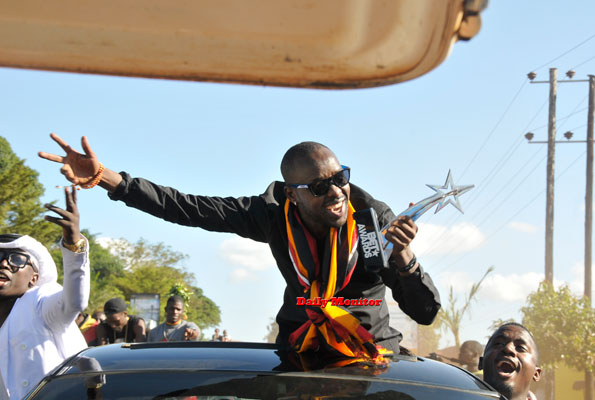 In this music video, directed by, Patrick Elis, from Nigeria, Eddy Kenzo proves that he has grown musically and is ready to take a truly Ugandan product to the international market.

In the video, Kenzo keeps a dash of African wear in almost all the scenes while keeping it simple to appeal to both his local and international audience easily. Soraye begins with Kenzo making his way to the video shoot location. He starts singing about the woman of his life and confesses his love for her and how he wants her to be the mother of his children. The woman in the video is a beautiful model sourced from Rwanda and transported all the way to Los Angeles where the video was shot.
Shooting a video worth millions of shillings in Los Angeles has its own merits. The scenery used is A-Class and beautiful. It vividly brings out the beauty of the song and video that Kenzo is trying to sell to the world.
Good lighting coupled with awesome sound that was done by audio producer Kusseim of Jahlive leaves nothing but a touch of class to the Soraye video. No wonder Soraye is off Kenzo’s Zero to Hero album.
Kenzo also used a couple of dancers in the video. Although they were not the usual Sitya Loss dancers, Kenzo picked a great dance group that brings out the danceable parts in the video. The dancers are my highlight, thanks to their unassuming but entertaining dance moves. The colourful four-minute video ends with Kenzo joining the dancers to do one final rave. With close to 100,000 views on Facebook, Soraye will take Kenzo places this year.