Joe returns for the Jazz Safari 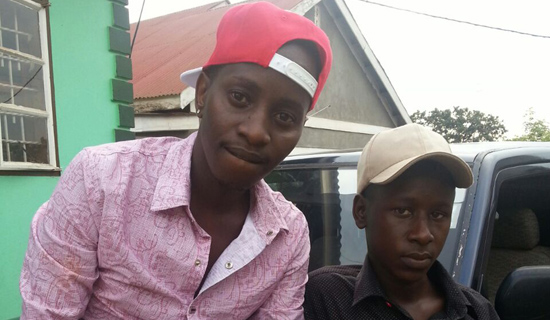 Date with a celeb : Hanging with MC Kats

How to be Anne Kansiime

FINE ENTERTAINMENT: Now in its seventh year, the Nile Gold Jazz Safari is on at the Kampala Serena Hotel this evening. Edgar R. Batte profiles the show’s headliners who arrived in the country on Tuesday.

This will be Joe’s second concert in Uganda. The smooth crooner was here in 2008 and performed at Lugogo Cricket Oval on December 5, for a single concert and brought down the house with his expressive music that wowed Ugandan music lovers who surrendered to his stage delivery. They sang along and one lucky girl got to slow-dance with the bald-headed singer.

You will recognise Joe, 41, as a singer behind some of the smoothest ballads, one reason that has won him quite a following. He is behind songs like Don’t Wanna Be a Player, All The Things Your Man Won’t Do and Good Girls, which are all on his first platinum album titled All That I am, which was released in 1997.

Joe’s next album, My Name Is Joe, which was released in 2000, has been his most successful to date, reaching the top of the R’nB album charts and number two on the Billboard 200, and eventually selling more than three million copies.

It featured the R’nB number two and pop number four hit lead single I Wanna Know, which also reached the top 40 in the UK and Australia. These and more will be songs that the star will be performing tonight at the jazz safari. He has released more music since the 2000 album, his latest is his Bridges album released three months ago.

Winston ‘Tshaka’ Mayanja, one of the organisers of The Jazz Safari, says Joe Thomas was an easy choice to headline the Jazz Safari this year.
“Joe is a complete artiste. He is a multi-instrumentalist, songwriter, singer and producer,” Mayanja told Sqoop.

He further explained that it is about the pedigree and longevity of an artiste, referring to Joe. “That’s what I consider,” he added on why he chose the international R’nb star.

Jazz Safari origins
The Jazz Safari was conceived by Mayanja, an idea he introduced to his friend Elijah Kitaka, the host of the Jazz Evenings show that airs every Sunday on Radio One. Together, they partnered and organised the very first Jazz Safari, which was held outdoors in the Ange Noir discotheque car parking yard on December 19, 2008. The concert featured US Jazz luminaries Eric Marienthal on the saxophone and Oscar Seaton on drums. Others were Tshaka (Bass), Pragmo (Piano), Henry Holder (Keyboards/Synths), Deziray Eric Bucumi (Lead Guitar), Michael Ouma (Acoustic/Rhythm Guitar) and Wakake Otieno (Percussions).
“The dream for the Jazz Safari project is to promote Jazz in East and Central Africa first and foremost, then to other parts of Africa,” Mayanja adds.
“Jazz followers should expect the best from Joe and well renowned award winning jazz luminaries. Norman Brown and Tizer will be on stage,” he says.

Norman Brown
For the lovers of good guitar, look out for Grammy Award winner Norman Brown. This chap first picked up a guitar at the age of eight. Norman, now 43, has surely become a maestro at what he does, tickling the guitar for jazzy musical notes. He was inspired by Jimi Hendrix’s mind-bending rock sounds.

After high school, Brown moved to Los Angeles to pursue his musical career, attending the Musicians Institute where he also taught for a time. While playing with his own group in local clubs, and drawing comparisons to George Benson, Brown was discovered and signed to the MoJazz label, a division of Motown.

He delivered his 1992 debut, Just Between Us, and followed it with the gold-certified After The Storm and 1996’s Better Days Ahead.
According to his official website, Brown won critical acclaim and sales. The talented musician made the leap to Warner Bros and released Celebration, which first teamed him with producer Paul Brown.

The 2003 follow-up, Just Chillin’, earned Brown much-deserved recognition with a Grammy Award in the best pop instrumental category. That project was followed by his 2005 release, West Coast Coolin’, where Brown tested out his skills as a vocalist, a move that was welcomed by the urban radio market. In addition, his 2005 compilation The Very Best Of Norman Brown was one of the best-selling smooth jazz albums of that year.

Brown made the leap to the Peak Records label, a division of Concord Music Group, in 2007 for his smash CD Stay With Me, which yielded the Rn’B vocal hit of the same title and the smooth instrumental favourites Let’s Take A Ride and Pop’s Cool Groove. The guitarist kept the good vibes going on his long-awaited June 2010 release, Sending My Love.
In addition to success as a musician and producer, Brown launched a successful career as a broadcaster. In January of 2007, he brought his engaging personality to Broadcast Architecture’s Smooth Jazz Network as an on-air personality, hosting his own weekend radio show.
In June 2012, Brown joined sax master Gerald Albright who has performed at previous Jazz Safari editions for a joint album titled 24/7.
Tizer
Joe and Brown will be also performing with Tizer, a multi-cultural band driven by an explosive mix of jazz, rock, classical, jam band influences and Afro Cuban and world rhythms. So behind smooth ballads, there will be some upbeat moments thanks to the musical fusions by the band.
Tizer is led by keyboardist/composer Lao Tizer. The band has established itself in the contemporary jazz world over the past few years, presenting comparisons of a modern twist to the 70s and early 80s.

It has released a number of albums characterised with intensity, expansive arrangements and exciting soloing in concert. The group’s 2010 debut release Tizer Live, captured the vibrant interaction between the different band members and their abilities.

There is an Italian-American New Yorker Minucci, African American violin great Karen Briggs and Cuban born drummer/percussionist Raul Pineda, in addition to Kollman, multi-instrumentalist Steve Nieves and Lao himself, who grew up in Boulder, Colorado.
If you have your ticket then you should find your seat early enough and ready yourself for an evening of jazz and interaction with these stars, each in his own right.