The kinds of people you will meet at campus

Behind the scenes: With the fresher season on, it’s just right that Sqoop guides the campus newbies about what has been, what is, and what will always be for all ages to come in a typical Ugandan university. As it’s often said, a campus student shall not be known by the course he pursues, but by the clique they find themselves in. There are groups and cliques everywhere in Ugandan universities, usually united by a common hobby, background or lack thereof, writes Ian Ortega

The Models
For these divas, their life is a fashion show. They are commonly sighted in large numbers at Makerere and Mubs. Every week that comes by, is a fashion week. They always get into the lecture rooms later than most, otherwise, how would they get to be noticed? Every walkway at campus is a runway for them. They practice all kinds of walks, the catwalks, the dogwalks and even the hit-on-me walk. And don’t forget to watch them hold their latest Samsung phone, with only a finger or two.

The wannabe politicians
They go by all kinds of names; Kyambogo had “Champion of the Poor”, you will meet them in Lumumba and Livingstone halls of Makerere. They will organise a strike over any issue. If the lecturers are dodging, they will strike, if the lecturers are very punctual, they will strike. They even strike on intuition. Don’t be surprised if you find them striking over a statement like; “We heard a rumour that you are planning to sell off our university to Chinese.” Their life is about politics; shouting slogans, putting up posters and organising rallies. They come alive during elections for the new guild.

The Philosophers
After one or two lectures in social anthropology and theology, they get the feeling they know everything about the whole world. You will always find them bubbling quotes in ways that emulate the Socrates, the Platos and Karl Marxs of this world. Quotes such as; “the soul is the prison of the body, man then is the present, woman is the future.”

The preachers and pastors
They always know where the next youth conference is taking place. They don’t have time for their books, but they have this amazing time for their God. At around lunch time, they will be fellowshipping under tree-shades before breaking out in tongues. Their evening proggie is on and about cell meetings. They can quote the Bible, but they can’t quote a single statement after a lecture.

The tourists
You are never sure of their university course, let alone being certain about their actual campus and place of residence. You will go to Makerere, you will find them. You will meet them at a house-party in Mukono, you will find them in every hostel room, you see them everywhere, but you never see them seated in a specific lecture room. They are the nomads of the campus streets, walking around completely unphased about what life holds. Most of them have spent more years at campus than what their course requires because of the built-up pile of retakes.

The working class
They drive. They are probably married, and they are in most cases upgrading from a diploma to a degree, trying to secure their jobs. They have a mature approach to life; they speak the language of money when things get tough. They live by the adage; “when retakes accumulate, the money-speakers get going.” Remember to stick around them during exam time, by some reason of fate; the god of exams always speaks through them, with a leaked paper or two.

The businessmen and women
Trust me, these ones always have something to sell to you; whether a dress, a phone or the latest handout. They have shops in their bags, and whatever you desire, they provide as long as you are ready to fork out the cash. Their hostel rooms are secretarial bureaus for printing coursework or mini boutiques.

The bunkers
They apply the Pareto principle a.k.a. 80/20 rule in everything they do. They are well aware that only 20 per cent lectures will account for 80 per cent of what the lecturer will set for the exam. You only get to see them during tests, and during exam periods. They are the once in a millennia asteroid that lands in an exam hall and kills a lot of small exam questions. If you happen to miss seeing them during tests and exams, you may leave campus without a chance of ever seeing them again.

The cashless society
These live on campus. They ultimately live at the mercy of the university administration and its ability to provide accommodation, meals and allowances. They never hang-out except for such times when there is a beer promotion at campus. Their only prayer during strikes is that the administration never thinks of closing down the university because they will have nowhere else to go, except to get back to Kitgum or Bushenyi.

The housewives, husbands and the weekend wives
The housewives play all the roles that a woman plays in a marital home, from the sex, to the house-chores. They do the laundry of their boyfriends aka husbands and live in 24-7 with them.
Then we have the weekend wives, those girls who move in with their working class boyfriends for the weekends and the two live in marital harmony with the careless abandon of newly marrieds.

The hit and runs
Call them players, call them pick-up artistes, these guys have literally made a name among their circles at campus. They hit and run, they are always looking for fresh things to hit and run away from. Love to them, is a myth, love to them, is an idealisation, something that will never exist. But be aware, where they have gone, you shouldn’t go. It’s always a no-go zone. Go there at your own risk.

The NGO workers
These are the girls who have all this mercy at heart to help all those who can’t get some stuff. They have only one mission, and that is to respect and live by the line; “Come all you who couldn’t get some from elsewhere but want some.” They are the waters of campus, formless, shapeless, taking on the shape of any container that wants a part of it.

The movie stars
The seflies, the climbies, the nudies, the vilfies, the pelfies and the sextapes, these are the greatest passions of the movie stars. This is a new group that’s only crept in with the advent of smart-phones and social media.

The Yolos
Oh yes, literally every one of those dudes and girls who came from those very protective secondary schools. Campus to them, is a time of reclaiming the lost times. They now live by one rule; “You Only Live Once.” To them, it’s never alcohol if you don’t black out and wake up with a hangover. It’s never a party, if it doesn’t turn wild. If you want to pick up this lot, play some Jamaican music. They are updated about every hangout spot in Kampala and its suburbs. They invented the naked-mile at Makerere.

The annoying roommate
They assume leadership even where it’s not called for. They are used to giving orders. He or she will always nag you up with morality lectures, telling you to tidy up and take life seriously. They never bring anything to the room except their parasitic stomachs and mouths waiting to devour whatever edible crosses their eyes. And when you get lucky, these chaps will never allow climbing a tree or give you space, even for an hour.

The know-who guy
This one happens to know everyone at campus, and outside campus, and has very personal connections with each of them. He knows Patrick Bitature as a distant uncle. Call them a resource centre, because they are very reliable when you need information or a number of anyone at campus.

The life-planner
Huffington post describes them best; “They’ve got it all mapped out. They’re going to travel for six months after uni, then have an apprenticeship for a year before being promoted to a permanent employee. They’ll get married at 26, have their first born around 28 and another one, maybe two in their 30s. They’re intimidating- making you feel horribly unprepared – you don’t even know what you’re going to have for dinner let alone what your children are going to be called!”

The dude or girl reading this
You’ve read all this and you don’t fall in any of the categories. Stop deceiving yourself, the only reason you are uncategorised is because you are weird. You fall under the weirdoes’ category; your character is very mystical. You need to get a life, and begin to socialise.

The creams
For starters, Cream here means “Cash Runs Everything Around Me.” These are the pay-per view kind of girls that rock the campus areas. You pay to see them, you pay to talk to them, and you even pay to sit beside them in lecture halls. As deep as your wallet goes, so does their love for you. Approach them at your own risk, you may file for bankruptcy. Of late, they have Vitz, Spacios and Rav4s to cruise in. When it comes to the Creams, the highest bidder takes it all. Date them, and you will soon be singing along to Chris Brown’s These Hoes Ain’t Loyal and it will also be your ringtone, only sugar daddies can finance their lifestyle.

The lovebirds
There is that couple that’s going to stick together right from your first year to the final year. Everyone knows this couple and no one can dare come between them. They will always break up, only to make up a day later. Once in a while, they wear similar clothing and share accessories. The couple is averagely broke for most of the time but the magnets of love keep them together.

Where will you belong?
You are defined by the company you keep. There are all sorts of characters at campus. If you want to hang out with girls who drive their own cars, then they will link you to a sugar daddy, and if your friends are “savedees” be ready to sacrifice lunch to join the fellowship of people who speak in tongues.

In this article:campus, education, love birds

Songwriter and artiste Yesse Oman Rafiki recently released his new song titled Education For All, a song that calls upon children to consider education... 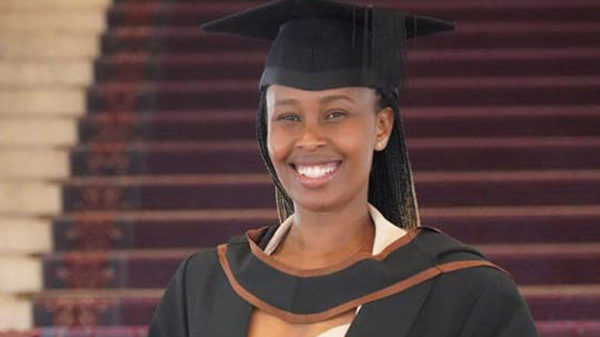 Barbie Kyagulanyi graduates from the University of London

Barbie Itungo Kyagulanyi today has yet another reason to celebrate. The mother of five and wife to 2021 presidential candidate Robert Kyagulanyi Ssentamu a.k.a... 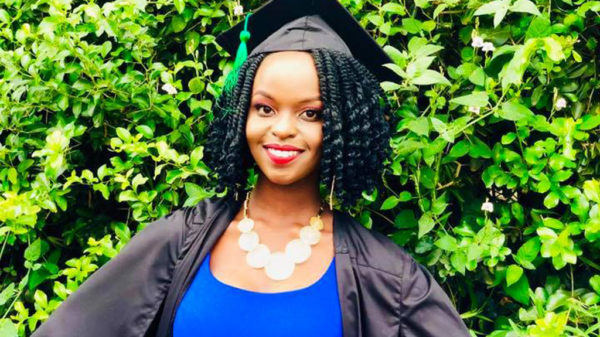 Baby Gloria scripts another chapter of her success story, graduates from high school

Most times when an artiste embarks on a music career when they are still in school, chances are high that the music career will... 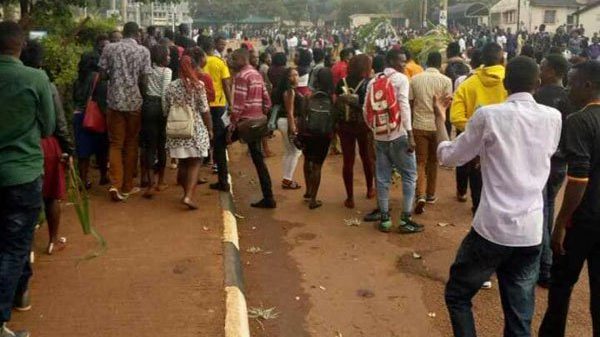 Business in and around Kyambogo university premises was paralysed as police fired teargas to disperse students who were striking over what they described as...