Mystery of Iryn’s arrest in Japan 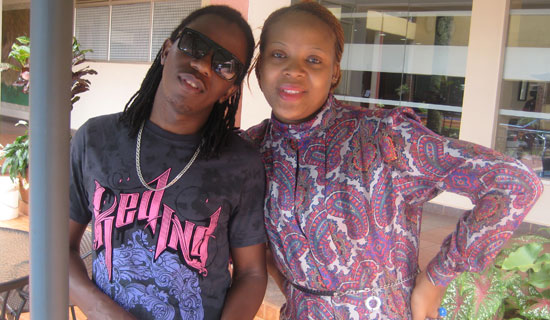 News triggered in on Tuesday morning that singer Iryn Namubiru had been arrested in Tokyo, Japan, where she had gone to perform at concert. Earlier allegations indicated that the diva had been arrested for being in possession of a bag that had illicit drugs that were packed with posho and peeled matooke.

Other speculations were that Iryn had fallen out with the promoter, a one Kim Ueno that had hired her to go to perform at a concert at Yotsukaido Cultural Hall in Tokyo Japan, on Saturday May 4.

Iryn was supposed to travel with two other singers, DJ Michael and Dr Hilderman but the two didn’t make the trip because they handed in their passports quite late and there was not was not enough time to process visas.

“The promoter asked us to hand in our passports, which we did, but he brought them back and told us we were late as the date for the show had drawn nearer. He told us that it was easier for Iryn to get a visa because she holds a French passport. He said it was easier to get a visa with a European passport,” Dr Hilderman told us.

According to Dr Hilderman, although the promoter’s name is almost similar to Japanese names, his real name is Kim Tumwesigye. “He told us he is the chairman NRM in Japan.”

Asked whether he had contacted the promoter to know what might have transpired, Dr Hilderman told us the promoter (Kim Tumwesigye’s) phones were off and he did not answer messages from the singer.

Yvette Seguya, Iryn’s younger sister who lives and works in France made a post on social network Facebook indicating that it was true Iryn was in custody but she called upon people to pray for her and not judge her.

“A guy called Kim a Munyankole in Japan also a well-known mufere in Kampala who claims he imports cars contacted the manager (Iryn’s manager Thaddeus Mubiru) and told him about a show he was planning in Japan. Truth is there was no show in Japan though they made the poster.” Yvette’s post read in part.

Yvette who said she had last talked to Iryn while in transit in Dubai, went on to explain that, “When Iryn was about to travel, Kim asked her to bring him some matooke and posho which Kim’s family delivered to Iryn …”

“Iryn’s manager knows Kim’s family in Uganda, we need answers because we have been trying to contact Kim but all in vain.” Yvette concluded that Kim might have left Japan and was already on his way back to Uganda by press time.

Yvette said they had contacted the French Embassy in Japan to find out why Iryn was being held and to update them on Iryn’s arrest. Yvette however insisted that her sister was legit and would not do any kind of illegal business.
“Those who think Iryn is that kind of chick, you don’t know her. She would die before doing anything illegal, she is that straight. Irene desperately needs our prayers, now isn’t the time for judging her, let’s just pray for her,” Yvette wrote.

Our emails to Iryn’s official email went unanswered and her manager (Thadeus Mubiru’s) known number was off. Yvette said they had contacted Iryn’s lawyers in France and they were to pursue the matter further!