Rubeleto’s day out with babies

A few weeks ago, real estate businessman Eng. Ronald Semakula aka Rubeleto was in the newsfor the wrong reasons. The Rubeleto Construction Consultancy boss had allegedly drawn a gunon veteran singer Joanita Kawalya!

Well, during an exclusive conversation earlier this week, Rubeleto denied the allegations.
“Everyone knows how much I love and respect Afrigo Band, so I wouldn’t do such a thing toJoanita Kawalya of all people,” Rubereto told us.

But that was not the reason we met him. Rubeleto was at Sanyu Babies home extending ahelping hand to the needy. He first visited the needy children’s centre in Mengo sometime lastweek and returned this week with hard cash and handed it to Ms Vicky Nassali the PRO Sanyu
Babies home.

“My donation is to take care of sweaters and bills,” Rubeleto told us shortly after handing over themoney in a closed door meeting with Nassali. He said he didn’t want pictures of the money takenbecause it’s a donation to charity and it wasn’t something he did to show off.

Rubeleto spent sometime playing with two children before he pledged to return to Sanyu Babies Home every time he’s called upon and every festive season. 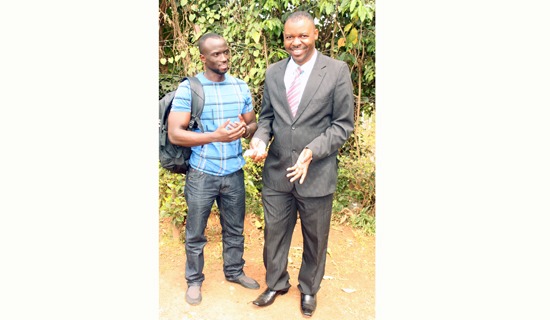 Date with a Celeb: Vincent Asiimwe aka Smoky meets Rubeleto

(Asiimwe met the Rubeleto Construction Concern boss who is famous for bankrolling artistes, at his office in Kololo and took a ride in his...